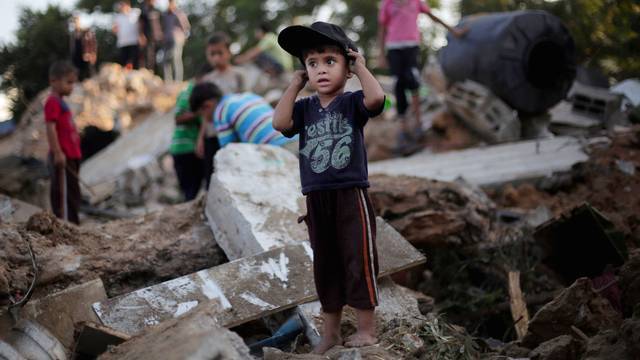 The Only Refugees in the World Denied the Right of Resettlement The news that hundreds of Palestinians from Gaza drowned last week when the boats in which they were trying to reach Europe sank once again highlights the hypocrisy of the world’s attitude toward the Palestinians. After all, the “international community” has designated two-thirds of all Gaza residents as bona fide refugees, even though the vast majority of them were born in Gaza and have lived there all their lives. And as bona fide refugees, they shouldn’t have had to board rickety smugglers’ boats in a desperate attempt to reach Europe; they should have been able to apply to the UN for orderly resettlement right from their refugee camps, just as thousands of other refugees do every year. But they can’t, because Palestinians are the only refugees in the world who are denied the basic right of resettlement.

Granted, they are also the only “refugees” in the world for whom refugeehood is an inheritable status that can be passed down to one’s descendants in perpetuity, generation after generation. Under the definition used by the UN High Commissioner for Refugees, which deals with all the world’s refugees except Palestinians, only a few thousand elderly Gazans who were personally displaced in 1948 would be considered refugees today, rather than the 1.2 million actually on UN rolls. So if the “international community” were to argue that Gazans don’t deserve a right to resettlement because they aren’t really refugees, that would be perfectly legitimate.

But it doesn’t. In fact, not only has the world adopted the unique definition of refugeehood promulgated by the Palestinians’ personal refugee agency, UNRWA, but it actively supports this definition by funding UNRWA’s ever-expanding budget to keep pace with its ever-expanding number of “refugees.” And once having accepted the claim that these born-and-bred Gazans are actually refugees from an Israel they’ve never seen, the international community is morally obligated to ensure that they enjoy the same rights as all other refugees.

Instead, Palestinians are the only refugees in the world who are denied the right of resettlement. Whereas UNHCR resettles tens of thousands of refugees every year, UNRWA hasn’t resettled a single refugee in its 65 years of existence. On the contrary, the schools it runs for Palestinian refugees indoctrinate them from kindergarten on that there is one, and only one, way for them to end their refugee status: by “returning” to the towns or villages in Israel that their ancestors fled–which most of them have never seen, and some of which no longer even exist. In short, since Israel would never voluntarily accept all five million “refugees” on UNRWA’s rolls, it’s telling them that the only solution to their refugeehood is Israel’s destruction.

According to a poll taken in late August, a whopping 43 percent of Gazans would like to emigrate. Many of these would-be emigrants are presumably among the two-thirds of Gazans registered as refugees, meaning they ought to be entitled to resettlement aid. So here’s a modest proposal: Western countries, which are UNRWA’s main donors, should take a big chunk of the over $1 billion a year they give UNRWA and spend it instead on resettling those Gazans who want to leave. Not only would that help the Gazan refugees themselves, but it would save money in the long run by significantly reducing the number of refugees under UNRWA’s care.

Alternatively, they could tell UNRWA they’re no longer willing to go along with the fiction that its five million “refugees” are really refugees, and from now on will provide funds only for those refugees who actually meet UNHCR’s definition. The remaining money would go to the governments under which most of UNRWA’s registered refugees live–primarily Jordan, the Palestinian Authority, and Lebanon–to help them provide the services UNRWA now provides.

But to continue defining Palestinians as refugees while denying them the basic right to resettlement is unconscionable. And all those Westerners who claim to be so concerned over Palestinian rights should be the first to protest this hypocritical and discriminatory practice.