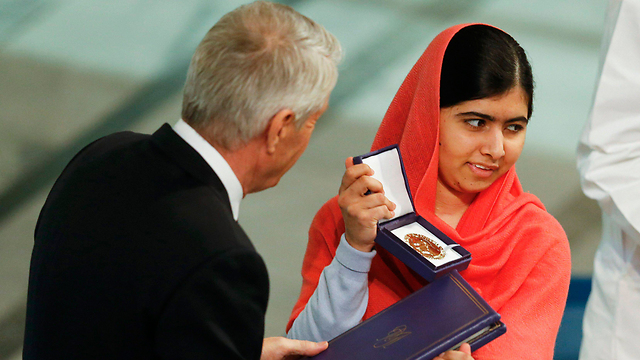 Palestinian human rights activist Bassem Eid is asking Nobel Peace Prize Laureate Malala Yousafzai to keep her promise to share her award money with the children of the Gaza Strip but to prevent the funds from falling into the hands of Hamas. In an “Open Letter to Malala” Eid shared with The Media Line, the noted activist told the young Pakistani laureate that “Hamas acts according to the principles of radical Islam, not of the UN principles.”

The text of the letter follows:

We see you have received the Nobel Peace Prize this week in honor of your activity for peace in Pakistan.

We congratulate you for your courage and for not being afraid to fight radical Islam in your nation.

I write these words as a proud fellow Muslim. I know how difficult it is with so many obstacles in your way, and for that reason, we need to support you. We are very proud of you. I appreciate your decision to contribute your prize money to the children of Palestinian refugees in Gaza, because they really need your help. Yet, I must advise you that if you want to make such a donation, please come here to do so in person and not through UNRWA – the United Nations Relief and Works Agency.

If you send funds through UNRWA, Palestinian refugee children will never benefit from it, because UNRWA funds in Gaza wind up in the hands of radical Islam.

You are personally invited to my home and my community in Jerusalem. We will organize a trip for you to travel to Gaza to meet Gazan school children and help you contribute your gift directly to children who need your help. Here are the facts at your finger tips:

That rocket launchers were found at UN facilities was hardly surprising. Fifteen years ago, the Gaza-based employees of the UNRWA held elections to determine its union leaders. Hamas took advantage of the campaign and took over the entire school system. By 2012, more than 90 percent of UNRWA employees had become Hamas supporters.

As a result of the takeover, Hamas created an entire apparatus whose mission was to maintain its grip on all of the Gaza-based UNRWA schools.

The organization Al-Kutla Al-Islamiya (the Islamic Bloc), changed the school curriculum and introduced new textbooks. Anyone looking at the subject matter would see an organization bent on disseminating its lethal ideology to young Gazans.

The takeover of UNRWA was an “inside job” carried out by the Hamas representatives assigned to each school whose job is to recruit students to the Islamic Bloc. This ensures that UNRWA schools have programs that prepare pupils for the armed struggle against Israel.

This involves grooming children as “would-be shaheeds (martyrs)” and brainwashing them on the unachievable “right of return” to Arab villages from before 1948 that no longer exist.

For you to get a an idea of the indoctrination that is taking place in Gaza, it would suffice to look at the Islamic Bloc’s YouTube clips, which feature UNRWA instructors acting at Hamas’ bidding.

The footage clearly shows that Gazan children are not introduced to the values of the UN but rather to the values of jihad, “liberation of Palestine” and the “right of return,” by force and arms.

Despite all this being an open secret — all of UNRWA’s donors are in the know, including the United States and Israel — the organization is still considered a welfare and relief agency that could provide an “alternative to Hamas.”

But if you ask Gazans what UNRWA has done for them, they would say “nothing,” (that is, except perpetuate their refugee status). Hamas knows the reason. It has a vested interest in ensuring that conditions of poverty remain unchanged and that the millions of greenbacks keep flowing in. This keeps the “right of return” relevant.

To state it simply: Donors hand over funds to UNRWA officials who are affiliated with Hamas who then act according to principles of Radical Islam, not of the UN principles.

Rockets and tunnels were the most pressing concern from Gaza this past summer.

Over the long haul, it is the Hamas brainwashing of Gaza’s school children that should have us worried.