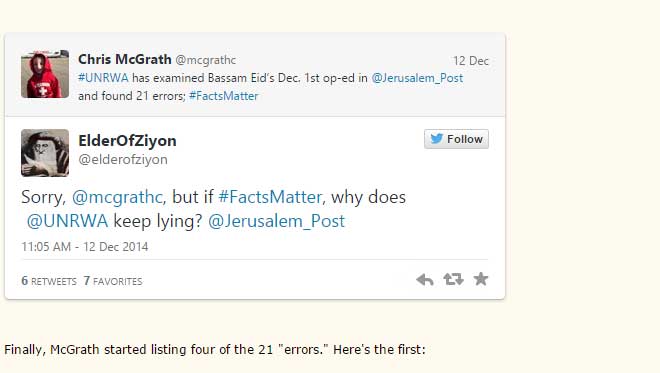 Early last year [UNRWA] set up a D.C. “liaison” office. With whom is it liaisoning? Mostly Congress, it turns out. U.S. law forbids the United Nations from lobbying Congress, but as we learned with Newt Gingrich “lobbying” or a “lobbyist” is in the eye of the beholder. UNRWA employs two full-time staffers in D.C., both of whom have loads of experience on Capitol Hill. Chris McGrath is a former aide for Sen. Harry Reid (D-Nev.); his boss, Matthew Reynolds, worked in legislative affairs for the State Department. I was assured no “lobbying” goes on, but they do meet virtually nonstop with lawmakers — appropriators are key — to answer questions about how taxpayer dollars are spent, why UNRWA’s work is important and how it makes sure money isn’t going to terrorists.

It seems American tax dollars are going, in part, to fund this office that in effect makes sure Congress doesn’t get fed up and cut off the money flow. Kirk might want to find out just how much liasioning is going on and whether the letter and spirit of the ban on lobbying are being strictly adhered to.

This paid political hack Chris McGrath has been actively – and absurdly – defending UNRWA on Twitter.

So, for example, after Chris Gunness spent a day hysterically going after the Jerusalem Post and calling for everyone to boycott it using the words “Boycott the JPost,” McGrath tweeted:

You may recall that the reason Gunness and UNRWA were up in arms was a devastating op-ed piece by Palestinian human rights leader Bassam Eid slamming UNRWA. On Friday, Chris McGrath tweeted:

As I waited to read details on these supposed 21 errors, I had fun with the hashtag #FactsMatter:

Eid didn’t say that UNRWA runs the camps. However, he did refer to “UNRWA refugee camps.” Guess who else does?

Here are his other “errors” and my responses:

McGrath’s arguments that UNRWA is fully audited and transparent is truly a joke.

Anyway, I am stil waiting for the remaining 17 supposed “errors” in Bassam Eid’s piece. There is more fun to be had.