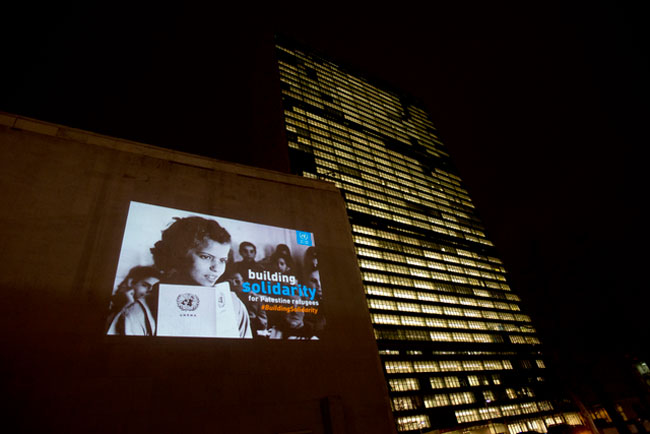 In Britain’s House of Commons a week ago, a meeting I attended heard a shocking bill of indictment against UNRWA, the UN Relief and Works Agency.

UNRWA was set up in 1950, two years after Israel was created, specifically to administer humanitarian relief to one group of refugees, the Palestinians.

UNRWA’s stewardship of the stateless Palestinians, as well as its role in creating their unique designation as “refugees” in the first place, has long been a cause for concern.

During last summer’s Gaza war, its relationship with Hamas came under a spotlight when rocket launchers and other paraphernalia of war were shown to be housed in, under or next to UNRWA schools and clinics. UNRWA fiercely denied any Hamas association.

Yet at the Commons meeting, presentations by the Jerusalem-based Center for Near East Policy persuasively suggested that UNRWA was helping to incite the stateless Arabs under its care to hatred, violence and jihad against Israel.

Most shocking was the film screened at this meeting in which UNRWA teachers boasted of encouraging their pupils to jihad against Israel, teenagers stated that their UNRWA teachers told them they must reclaim Israeli cities, and small girls were drilled by UNRWA teachers in chanting “Jerusalem is ours!” with their left arms pumping the air.

Before this meeting I interviewed UNRWA’s spokesman Chris Gunness for my show on Voice of Israel, the new English-language radio station. Wasn’t UNRWA’s definition of a refugee indefensible? Uniquely, it is extended to all descendants through the male line of those who were displaced by the Arab war against Israel between 1946 and 1948. More than 60 years on, many of these “refugees” are not only still in refugee camps but their number has accordingly multiplied by more than 600 percent.

Since I am a descendant of Eastern European refugees, I suggested to him, perhaps I too would qualify as a refugee under UNRWA’s definition? Not so, he replied, because anyone who took citizenship in another country no longer qualified as a refugee.

But UNRWA includes in its total of 5 million Palestinian refugees 2 million who have Jordanian citizenship. Cornered by that, Gunness claimed this was in accordance with the operational definition of a refugee provided by the UN General Assembly.

But the General Assembly resolutions which provided and subsequently expanded UNRWA’s mandate to provide relief did not define a refugee. That definition was laid down by UNRWA itself. As it said in 1951: “For working purposes, the Agency has decided that a refugee is a needy person, who, as a result of the war in Palestine, has lost his home and his means of livelihood.”

(Its current definition, incidentally, has changed “needy person” to “any person.”) The one issue where Gunness acknowledged there might be a problem was over the teaching of hatred and jihad through UNRWA’s educational materials. After sending up a lot of chaff about having to use the Palestinians’ own textbooks, and how UNRWA had “frameworks” for raising concerns over the content, he conceded that this was an area of difficulty.

But when I raised the fact that most UNRWA staff supported Islamic radicals, Gunness reverted to denial and evasion.

There was no evidence of this, he insisted; no party affiliation had ever appeared on staff union ballot papers.

For heaven’s sake – as if such ballot papers would actually say “Hamas’! The fact remains that, in 2012, candidates affiliated with Hamas were elected to 25 out of 27 seats on a union board that represents ten thousand UNRWA workers.

Before that election, the pro-Hamas Al-Resala newspaper wrote: “It is noteworthy that Hamas has controlled the UNRWA staff union in the elections since its inception, particularly the teachers sector in [the union], but the electoral system cannot list it to prevent [official] partisan affiliations of UNRWA employees.”

The reality is that UNRWA simply could not operate in Gaza without mutual cooperation with the Hamas administration. And Gaza’s children are being indoctrinated into hatred and war by Hamas supporters teaching in UNRWA schools.

Mamoun Abunaser is a deputy principal at an UNRWA school in Syria. His profile picture on Facebook says: “When injustice becomes law, resistance becomes duty.” Luay Shehab is a UNRWA school principal in Nablus.

He shows photographs of Israelis in burial shrouds and coffins on his Facebook page, with a caption reading: “Oh Allah, make the number of their dead as [every time a Muslim says] “Amen”! And several UNRWA teachers are known to be highly connected Hamas supporters.

Yet enraged by an article in this paper by Bassam Eid, Gunness last week tweeted a call to boycott The Jerusalem Post. Clearly, he employs as creative an approach to the word “neutrality” as he does toward the word “refugee.”

At the end of last month, Israel marked the first annual Day of Commemoration for Jewish Refugees. This was a long overdue public recognition of the 850,000 Jews ethnically cleansed from Arab and Muslim lands, a process which started in the 1920s but greatly accelerated after the State of Israel was created.

It is shameful that it has taken so long for Israel to acknowledge this forgotten exodus.

But the reason it could be overlooked is these genuine refugees did what most refugees do: resettle and move on.

The UN says it is running out of money for humanitarian relief for desperate people like the Syrian refugees.

Yet UNRWA’s basic budget for the coming year is $1.4 billion – for people who are not refugees at all. We should stop calling them Palestinian refugees. We should call them instead what they actually are: displaced Arabs.

These exploited people are deliberately kept in misery and incited to hatred and violence against Israel by Arab states as a weapon of existential war – aided and abetted by UNRWA and the Western governments that fund it.

Melanie Phillips is a columnist for The Times (UK).