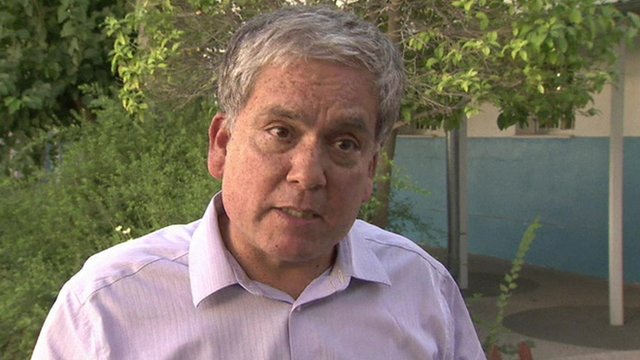 Much has been said about the controversial work of the United Nations Relief and Works Agency for Palestine Refugees in the Near East, aka UNRWA. Once established for providing a relief for Arab refugees of the Israeli-Arab conflict of 1948, it is now establishing itself as the main cause of the continuation of the conflict. For a while now, UNRWA has been operating as a “non-territorial government,” which undermines the ability of those it serves to become independent productive citizens. In the worst cases, UNRWA’s facilities have become a safe haven for terrorist activity. Another key issue is UNRWA school’s textbooks supplied by the PA, which include anti-Semitic and anti-Israel material. Jennifer Rubin of The Washington Post asked UNRWA to provide her with any data on the textbook’s audits. As far as I know, she is still waiting for a reply.

According to The Cambridge Online Dictionary, a ‘spokesperson’ is “someone who is chosen or employed by a person or organization to speak officially to the public for them”. Who is this public? We are. A spokesperson’s job is to speak with us. You, me, and of course the with the press. Nonetheless, a spokesperson’s job is much more than just speaking. It also include conveying a message as a public figure, setting things straight, providing valuable information or even managing a PR crisis. Well, at least if you are not Chris Gunness, the spokesperson for UNRWA.

On November 6th 2014, investigative blogger Elder of Ziyon, who is well known for his efficient foot-work when it comes to revealing incitement on social media and the internet, discovered the following alarming story: In 2010, UNRWA announced that it would take excelling Gazan students to the United States, where they would visit New-York City and the US Holocaust Museum in Washington D.C. According to the media, Hamas demanded UNRWA to cancel the “suspicious” tour. Apparently, the reasons for the cancellation were far more disturbing, as written by Gaza’s UNRWA union, on February 2011 (translated from Arabic):

Peace, mercy and blessings of God,

From the premise that everyone has responsibilities, and so as not to repeat the tragedies and mistakes made, we tried through continuous communication with UNRWA management to demonstrate the enormity of what they are doing with the latest travel delegation of our excelling students to go on a trip to America and visit the Holocaust Museum in New York [sic] for the so-called “Holocaust” and try to feed students concepts and ideas about the fake injustices suffered by the Jews. But it seems that the Agency’s management did not understand the message well and insisted on the repetition of such trips. They are today preparing for the new journey with the same goals and they have been promised large sums of money in addition to the upcoming initiative to build a curriculum on so-called human rights, which will include passages about the alleged Holocaust.

Based on the above we emphasize the following:

First: the rejection of such trips and this alleged curriculum. We will work with all to raise our voices to stop this unacceptable behavior, which is contrary to our religion and patriotism and humanity.

Secondly, we appeal to parents to take caution and vigilance and not to send their children to dive in the mud and to deal with such fake trips which will certainly affect the ideas of these outstanding students.

Third: We appeal to our fellow teachers not to deal with these trips.

Fourth: We demand the management of the agency [UNRWA] to reconsider its accounts in advance and take advantage of this exorbitant money to build schools and improve the classrooms that cannot accommodate our students and the provision of basic needs for the success of the educational process.

Our colleagues are our colleagues, God willing, we will remain watchful and defend our rights.

Let me sum this up: Mr. Da’las, the Deputy Chief of Staff at UNRWA’s Gaza Union, released an official statement that is even more extreme than the statement made by Hamas. In this official statement, he rejects the offer to send Palestinian students on an educational tour to the US, because it includes a “fake trip” to a museum revolving “the alleged Holocaust,” where educators will “try to feed students concepts and ideas about the fake injustices suffered by the Jews” according to a “curriculum on so-called human rights.”

Is it possible that a curriculum that was consisted with Holocaust education content was rejected by a United Nations’ agency official because of a claim that the Holocaust never happened? Ever since this disturbing story was published, I have been trying to get a clarification from UNRWA’s spokesperson, Chris Gunness at the most popular arena of our time for media personnel and news sources to exchange ideas and thoughts: Twitter. I had a good reason to believe that I will get a proper reply since Chris Gunness owns a Twitter account, which he is using on a regular basis to post UNRWA-related updates and interact with others.

After asking a few times for a reply without receiving any response, I found out that it is because I was blocked from following him or reading his Twitter feed. Turns out I was not the only one: Mr. Gunness’ segregation and discrimination doctrine was also the fate of journalists, bloggers, diplomats and even an entire newspaper. Yes, Chris Gunness urged his followers to ‘boycott The Jerusalem Post’, apparently, just because he did not like an op-ed that was published there by Palestinian human rights activist Bassem Eid, urging a reform in UNRWA. The last comment sparked a controversy, and was criticized by The US State Department, calling UNRWA to “uphold its stated policy of neutrality”.

In what world does a spokesperson blocks journalists, avoids crucial questions about the organization he represents or blocks all criticism? Apparently, only in the Chris Gunness world. Every single one of us should be worried about the unbearable ease when a United Nations agency and its spokesperson are deliberately shutting any slight mention of a debate about the mounting evidence of the growing hate among its employees, including teachers of children. Holocaust denial, the same as racism, are forms of incitement that should be confronted, not covered up. Besides being an offense of common morals of human society, Holocaust denial is also an offense to every single thing the United Nations should stand for. United Nations Secretary-General Ban Ki-Moon has clearly stated his position on this matter, and has condemned Holocaust denial from the early days of his tenure:
“Denying historical facts, especially on such an important subject as the Holocaust, is just not acceptable. Nor is it acceptable to call for the elimination of any state or people. I would like to see this fundamental principle respected both in rhetoric and in practice by all the members of the international community”.

Mr. Gunness, if you read this, I am still waiting for an answer to my question: why did UNRWA union deny the Holocaust?