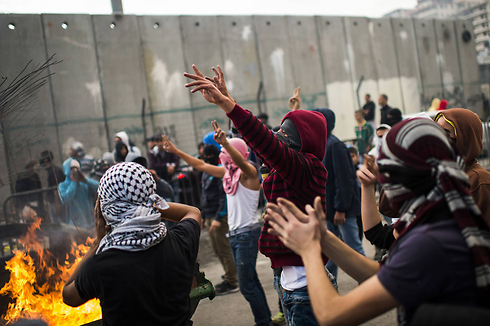 On January 4, 2014, the East Jerusalem newspaper Al-Quds revealed the content of a conversation between Palestinian Authority Chairman Mahmoud Abbas and U.S. Secretary of State John Kerry, which dealt with the Palestinian motion at the UN Security Council.  According to the newspaper, when Kerry despaired of convincing Abbas to desist from his move, he threatened him with the words: “You will lose the Authority, you will lose the two-state solution, and you will lose yourself.”

Yet Abbas, for his part, is not prepared to surrender, and the message he conveys to the Palestinians and the countries of the world is that the Palestinians have nothing to lose, and that he will maintain his strategy whatever its outcomes.

Muhammad Ashtiyeh, a member of the Fatah Executive Committee and one of Abbas’ closest associates, defined the new strategy.

In an interview to the Al Jazeera network on January 4, Ashtiyeh said:

The Palestinian Authority knows that its cause is just, that all the cards in the Palestinians’ hands are winning cards from a legal standpoint, and the Palestinians are now moving to a strategy of internationalization of the conflict with Israel, but it will not win real success if it is not accompanied by a nonviolent popular intifada. [emphasis added]

Concurrently, Abbas is threatening to dismantle the Palestinian Authority and hand over its keys to Israel, which will then have to deal with the situation in the territories by itself.

According to Fatah sources, in recent days Abbas has conveyed messages in this vein to several Arab states.

In his statements Abbas expresses great self-confidence and no fear of the sanctions the Israeli government imposed on him by withholding NIS 400 million of the tax revenues Israel collects for the Authority. He also shows no fear of the possibility that the United States will end its annual aid to the PA.

Senior PA officials say the money Israel is withholding is not a “gift” but rather money that belongs to the Palestinians, and therefore Israel is committing “official thievery.”

The Palestinian message emerged clearly in an editorial published on January 4 in Al-Quds under the headline “Pressure Will Not Solve Any Problem but Rather Will Lead to an Explosion.”

The editorial ends with the words: “They are wrong if they think we will submit to their pressures and that we will be an Authority without authority; all these pressures will lead to an explosion in different forms.”

The Palestinians demand that the Arab states provide them with an economic safety net amounting to $100 million in aid per month, as was promised to them in earlier summit conferences, so they can withstand Israel’s sanctions and also, possibly, future U.S. sanctions.

They likewise demand that the Arab states, especially those that are members of the anti-Islamic State coalition, pressure the United States to moderate its policy toward the PA.

The Palestinians’ expectations of the Arab states are not high. Their experience with them is negative, as evidenced by the fact that most of the money for the rehabilitation of the Gaza Strip promised at the donors’ conference in Cairo, to the tune of $5.5 billion, has yet to arrive.