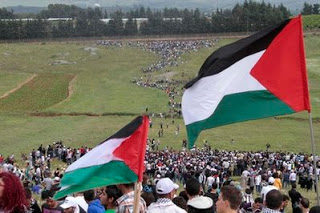 On January 1, 2015, the New York Times editorial page led with a piece titled “The Palestinians Desperation Move.” The opinion piece advanced the case that acting Palestinian Authority President Mahmoud Abbas must be frustrated in his mission to create a new Palestinian State.

Desperate people take what they can. They view their options as limited and prospects as weak. They seize any opportunities to advance their main goal, whatever that might be.

Witness early Zionists agreeing to any size and configuration of a Jewish state, despite their dream for a larger state based on the British Mandate of Palestine in 1922. They voted “yes” to a United Nations partition in 1947. They voted “yes” to greater Jerusalem and greater Bethlehem being international cities.

The Arabs, on the other hand, consistently voted “no” at every juncture.

These are not activities of a people that is “desperate” for a state. These are not actions of leaders who are willing to make compromises to establish a country and move their people forward.

Palestinian actions have consistently had three main areas of focus:

A Jew-free Palestinian state: Palestinians have sought to recreate the conditions of the Arab-controlled regions that expelled and barred the Jews from 1949 to 1967. The Palestinian leadership has continually called for preventing any “settlements”, meaning barring any Jewish people from living anywhere in Gaza, the West Bank and the eastern part of Jerusalem that was controlled by Jordan from 1949-1967. Various Palestinian efforts towards peace talks have demanded a pre-condition of Jewish settlement freezes before any peace talks could begin.  They have lobbied the United Nations to condemn any and all settlements as illegal (even though Jews always lived in the lands before the illegal Jordanian takeover in 1949).

Palestinian law has repeatedly cemented the position of a Jew-free state. In 1973, it passed legislation that made the sale of any land or home to an Israeli to be a capital offense. The Palestinian Authority announced in 1997 that it would seek the death penalty for anyone selling land to a Jew or Israeli.

Abbas has repeatedly voiced his vision of a Jew-free Palestine, stating that he would not allow the presence of a single Israeli- civilian or soldier – in a new Palestine.

Abbas and other members of the Palestinian Authority have also called on the world to engage in a BDS- Boycott, Divestment and Sanction – of any Israeli company that has a presence in the territories they hope will become a Palestinian state. Their aggressive efforts in advancing BDS further underscores their desire to not only prevent any Jews living in a future state, but even establishing businesses there as well.

Even the Universities on the West Bank have laws that prohibit Jews from stepping foot onto campuses.

In short, Palestinian law and leadership calls for banning Jews from visiting, working, buying land or living in the territories it wants for a future state.

Those are the official positions of the “moderate” acting-president of the Palestinian Authority and the existing Palestinian laws. However, the majority of the Palestinian people are in favor of Hamas and would elect someone from Hamas as president according to every poll over the past few years. The Palestinian public elected Hamas to 58% of the Palestinian parliament in their last election in January 2006. Hamas’s charter and its leaders call for the outright killing of Jews and have specifically identified the Jewish nature of Israel as the root cause of the conflict: “In face of the Jews’ usurpation of Palestine, it is compulsory that the banner of Jihad be raised…”

Hamas calls for a single Arab Palestine to cover Gaza, the West Bank and all of Israel. They have never backed down or waivered from their 1988 charter in any statement from any leader since that time.

Abbas’ Fatah party has stated that it will “compromise” for a Palestine that follows the “1967 borders.” It states this, despite the fact the 1967 “borders” were not borders but Armistice Lines established in 1949 with Egypt and Jordan. Both of those armistice agreements specifically stated that those lines were not intended to be borders. After repeated invasions and wars by the Palestinians and its Arab allies, Israel has made clear that it will not accept those 1949 Armistice lines as final borders.

“Moderate” Palestinians argue that United Nations Resolution 242 stated that Israel should remove its armed forces from territory acquired during the 1967 war. While the Israelis point out that the language specifically does not state that it must leave “all” of the territory, Abbas is demanding such complete withdrawal; a “maximum” position within the two-state framework.

No recognition of the Jewish State. For much of Israel’s existence, the Arab world refused to recognize Israel in any matter at all and viewed Israel’s entire existence as illegitimate. The Arab world underscored the point with the famous three “no’s” in 1967 including refusing to recognize the basic existence of Israel.

In 1975, Yasser Arafat and the PLO effectively lobbied the United Nations to label the national aspirations of Jews to be a form of racial discrimination. Specifically, Resolution 3379 adopted by the General Assembly referred to the “the racist regime in occupied Palestine” and determined “that zionism is a form of racism and racial discrimination.” Such efforts have nothing to do with establishing a new country and everything to do with delegitimizing the rights and claims of Jews to their own state.

Today, Palestinian leadership continues on the same path of delegitimizing Israel.  Palestinian leadership makes a point of denying Jewish history in the Holy land. Whether addressing the United Nations General Assembly or speaking to reporters, acting Palestinian president Mahmoud Abbas denies any connection between Jews and their history in the land. In 2014, Abbas stated that “they [Israel] imagine that by brute force they can invent a history, establish claims and erase solid religious and historical facts.”

Abbas has made very clear that he will never recognize the Jewishness of the state of Israel:

Underscoring these points is the insistence of a “Right of return” for descendants of pseudo-refugees to the state of Israel. He believes that the 4.6 million SAPs (Stateless Arabs from Palestine) should be entitled to move into Israel as opposed to a new Palestinian state. The entire point of partitioning the land for two peoples and creating a new Palestinian state is to create a home for these Arabs. What is the point of sending the grandchildren of Arabs who left homes in 1948 to a country they despise (Israel) when they are just creating the country they dreamed of (Palestine)?

For almost a century, the Palestinians have tried various paths to achieve their goals: broad regional wars;  local wars; intifadas; riots; peace talks and lobbying the United Nations.  But what are they hoping to achieve?

If the primary goal of the Palestinian people was a state, would they care if a small number of Jews lived there? Would they so strongly object to recognizing Israel as a Jewish State? Would they insist on an all-or-nothing strategy of getting everything in negotiations?

Are Palestinians truly desperate for a state or are they desperate to deny any rights and legitimacy of Jews to live in the land?

No response to Olmert plan: http://www.haaretz.com/news/olmert-abbas-never-responded-to-my-peace-offer-1.263328

Maximum of Olmert is short of Minimum for Abbas: http://www.israelnationalnews.com/News/News.aspx/175910#.VKl5bJs5CUl

Palestinian law banning the sale of land to Jews: http://www.jpost.com/Middle-East/PA-affirms-death-penalty-for-land-sales-to-Israelis

Palestinians are “Desperate” for…