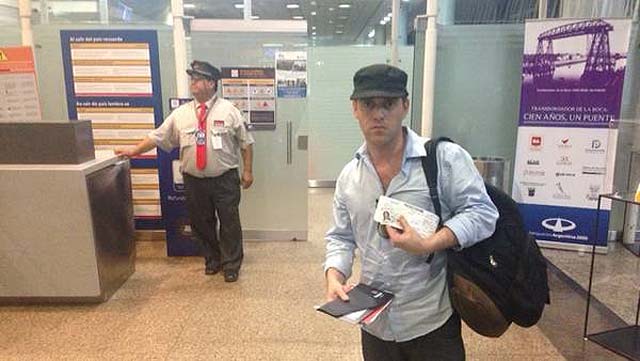 Damian Pachter, the first journalist to report the murder of Jewish-Argentine prosecutor Alberto Nisman, said on Friday that he was being followed by unknown people and feared for his safety, his employer at the English-language Buenos Aires Herald said. Today, according to Haaretz, Pachter, an Israeli citizen, landed in Tel Aviv.

Nisman, the lead prosecutor in the investigation of alleged collaboration between Iran, Hezbollah and the Kirchner government over the coverup of the 1994 bombing of the Jewish center in Buenos Aires, was found dead under suspicious circumstance with a gunshot to his head at his home.

The day after his death, Nisman was scheduled to testify before a congressional hearing, where he planned to accuse President Kirchner of shielding the Iranians in return for oil.

“I’m leaving because my life is in danger. My phones are tapped,” Pachter told the website Infobae. The website carried a photograph of Pachter, wearing a cap and carrying sunglasses, at the airport before boarding an Aerolineas Argentinas flight.

Argentine state-run news agency Telam reported that the flight was bound for Uruguay.

“I’m going to come back to this country when my sources tell me the conditions have changed. I don’t think that will be during this government,” Patcher told Infobae.

Apparently, Pachter drove directly from the offices of the Herald to the airport Thursday night, without stopping at his apartment, fearing that an assassin was already waiting for him there. His car remained in his building’s parking lot.

Earlier this week, President Kirchner claimed Alberto Nisman was murdered to implicate her. She argued that Nisman did not commit suicide, but was instead killed in an “operation” that targeted her government.

Prosecutor Viviana Fein, who is leading the investigation into Nisman’s death, said that the shot had been fired “from a distance no greater than a centimeter.” She noted that ballistics analysis will be needed to determine whether or not the bullet taken from Mr Nisman’s body matches the gun found at the scene.