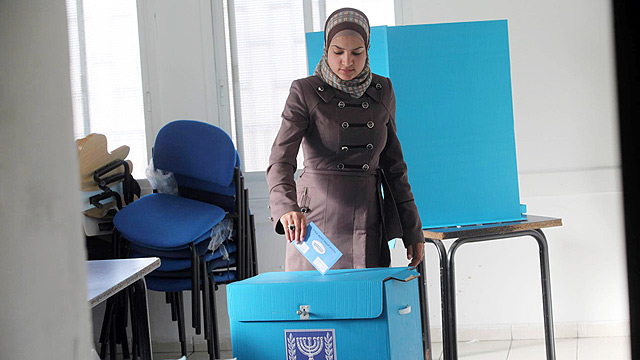 [Dr. Aaron Lerner – IMRA: Let’s get this straight: The Likud Party didn’t
encourage its members to try to interfere with Israeli Arabs as they went
about participating in the Knesset elections. All the Likud Party did was
encourage its own members to VOTE. And while AMERICAN money bankrolled the
efforts to get out the Israeli-Arab vote, that doesn’t mean that it is
somehow unfair for the Likud to bring this phenomenon to the attention of
their members so that they appreciate that the outcome of the elections will
reflect a higher participation rate of people who are NOT voting Likud – in
this case Israeli-Arabs, and thus a Likud victory requires a higher
participation rate of Likud supporters than would otherwise be the case.

To repeat: THE SPOKESMAN OF THE PRESIDENT OF THE NATION THAT IS THE
CHAMPION OF DEMOCRACY IN THE WORLD IS ATTACKING AN ISRAELI POLITICAL PARTY
FOR ENCOURAGING ITS MEMBERS TO VOTE!!!!!

And for the record: if we are talking about anti-democratic behavior during
the course of the voting, the MOST BLATANT EXAMPLE of anti democratic
behavior took place at Israeli Arab polling stations:
17 March 2015: Haaretz Blog: 1:20 P.M. Yisrael Beiteinu is filing a
petition with the Central Elections Committee,… the party claims that its
representatives with entry permits were not allowed into many polling
stations in Arab villages. “Yisrael Beiteinu strongly condemns attempts to
falsely alter the election results within the Arab community and violently
prevent Zionist party representatives from observing and preserving the
election’s integrity in Arab villages.” (Barak Ravid)
=======================
The White House
Office of the Press Secretary
Press Gaggle by Press Secretary Josh Earnest en route Cleveland, OH, 3/18/15
Aboard Air Force One
En Route Cleveland, Ohio

Q Did the President speak with Prime Minister Netanyahu after the
election?

Just as a relevant piece of recent historical context is that there have
been two Israeli elections during the Obama administration. In both
situations, in the aftermath of both elections, the President did not
telephone Prime Minister Netanyahu until he’d already been directed by the
Israeli President to begin the process of forming a coalition government.

Q — talking about the Palestinian state issue over the last couple of
days, citing the election. But now that the election is over and Prime
Minister Netanyahu has been reelected, can you talk a little bit about what
that means for the U.S. goals in the peace process and the hope for a
two-state solution?

MR. EARNEST: That’s a good question, Justin. I’ve got a couple of things
to say about that. The first is that the unprecedented security cooperation
between the United States and Israel, including our strong military and
intelligence relationships, will continue. And that relationship will
continue because those relationships are essential to the security of the
Israeli people, and the President is committed to continuing that important
security cooperation.

The second thing I wanted to say is that it has been the policy of the
United States for more than 20 years that a two-state solution is the goal
of resolving the conflict between the Israelis and the Palestinian people.
And that two-state solution has been pursuit of a democratic and Jewish
state of Israel living side by side in peace and security with an
independent and sovereign Palestinian state. That has been the policy of
the United States under both Democratic and Republican Presidents.

In the context of the recent election, Prime Minister Netanyahu indicated a
change in his position. And based on those comments, the United States will
evaluate our approach to the situation moving forward.

Q — that you guys may no longer favor a two-state solution, or that you
may reevaluate sort of your ability to cooperate with Netanyahu?

MR. EARNEST: What I’m suggesting is that it has been the longstanding
policy of the United States that a two-state solution is the best way to
address this conflict, primarily because it is in the security interest of
the Israeli people — again, in the view of the United States — it is in
the best interest of the Israeli people because it would be the best way to
resolve the very legitimate security concerns that they have.

The United States also happens to believe, and the President also happens to
believe that this would be the best way to resolve the situation, this
conflict in a way that satisfies the concerns of the Palestinian people as
well. They seek a sovereign, independent state. This solution also has the
benefit of best addressing the stability of the region; that this ongoing
conflict has contributed to instability throughout the region and that
addressing this conflict by establishing a Jewish independent state of
Israel living side by side in peace and security with a sovereign,
independent Palestinian state is the best way to defuse regional tensions as
well.

Of course, it’s not going to solve every problem, but we know that this
ongoing conflict does serve to inflame tensions around the region and
promote instability. And it has long been the policy of the United States
and it continues to be the view of the President that a two-state solution
is the best way to address those tensions and address that instability.

Q Netanyahu said that there would not be a Palestinian state for as long
as he’s Prime Minister. So the U.S. position is that you favor a two-state
solution. But he’s saying that he doesn’t want that as long as he’s in
office. So does that mean the Mideast peace process is essentially dormant
for the rest of the Obama administration?

MR. EARNEST: It means for today — it means that for today that based on
Prime Minister Netanyahu’s comments, the United States will reevaluate our
position and the path forward in the situation.

Q Josh, is having his congratulating Prime Minister Netanyahu — other
world leaders, like Canadian Prime Minister Stephen Harper extended his
congratulations. And given the sensitivity of this election with the
Iranian nuclear negotiations, was there any thought give to changing the
protocol that you guys have used in the past and maybe speeding up the
timing of the President’s call to the Prime Minister?

That is the historical context. But what I would anticipate is that in the
coming days, the President will make his own call to the Prime Minister.
…

Q Josh, a couple more on Bibi. Republicans have put out the most
celebratory statements on the results. Some like Ted Cruz have pointed out
that in their view, Netanyahu seems to have won despite the efforts of the
Obama administration — the Obama political machine, I think he put it. I
wonder if you care to respond to that. And also, could you address what
this does to efforts to prevent passage of either new sanctions without a
veto-proof majority, also the Corker bill to require congressional —

MR. EARNEST: I don’t anticipate that this will have a substantial impact on
our ongoing efforts to resolve diplomatically the international community’s
concerns with Iran’s nuclear program. And the reason for that is, obviously
Prime Minister Netanyahu has had ample opportunity to make very clear what
his views are about that situation, so I’m not sure that the events over the
last 24 hours or so has a material impact on that.

As it relates to some of the comments from Republicans, I’ll just point out
that the administration, in very conspicuous fashion, avoided leaving
anybody with even the appearance of an administration effort to influence
the outcome of the elections one way or the other. The President pointedly
avoided commenting on the political back-and-forth that took place in the
context of the election. The President avoided meeting with Prime Minister
Netanyahu when he traveled to the United States only because it was two or
three weeks before the election.

So this administration has gone to great lengths to avoid weighing in on one
side or the other. And the reason for that is we believe that the interest
between our two countries is well served by preventing this relationship
from being subjected to a lot of aggressive partisan rhetoric. And the
President has certainly done his part to ensure that we’re protecting the
U.S.-Israeli relationship from that kind of political back-and-forth. And,
again, that is consistent with the tradition that other U.S. Presidents have
prioritized, which is avoiding sort of the kind of partisanship that is part
of the U.S. democratic process from infecting the U.S.-Israel relationship.

Q And then, I don’t know if you’ve had much time to talk to the
President — do you know if he was monitoring the election returns closely,
or was he briefed on sort of the progress as the night went on?

MR. EARNEST: I don’t know that he was getting minute-by-minute updates, but
I do know that he has had an opportunity to talk with his team about the
results of the election.
…
MR. EARNEST: …There’s one other thing that I anticipated might come up
that I just did want to mention as it relates to the Israeli elections.
Specifically, there has been a lot of coverage in the media about some of
the rhetoric that emerged yesterday that was propagated by the Likud Party
to encourage turnout of their supporters that sought to, frankly,
marginalize Arab-Israeli citizens. The United States and this
administration is deeply concerned by divisive rhetoric that seeks to
marginalize Arab-Israeli citizens.

It undermines the values and democratic ideals that have been important to
our democracy and an important part of what binds the United States and
Israel together. We’ve talked a lot about how our shared values are an
important part of what binds our two countries together, and rhetoric that
seeks to marginalize one segment of their population is deeply concerning
and it is divisive. And I can tell you that these are views that the
administration intends to communicate directly to the Israelis.

Q So will the President speak about that directly with Prime Minster
Netanyahu when he speaks with him?

MR. EARNEST: At this point I don’t want to preview any details about the
call. But I can tell you that these are — that there is deep concern about
this divisive rhetoric and we will share those deep concerns directly with
the Israelis.

Q Did Secretary Kerry bring that up when he spoke with the Prime Minster?

MR. EARNEST: I don’t have a detailed readout of Secretary Kerry’s call.

Okay. All right. Thank you, guys. I appreciate it.