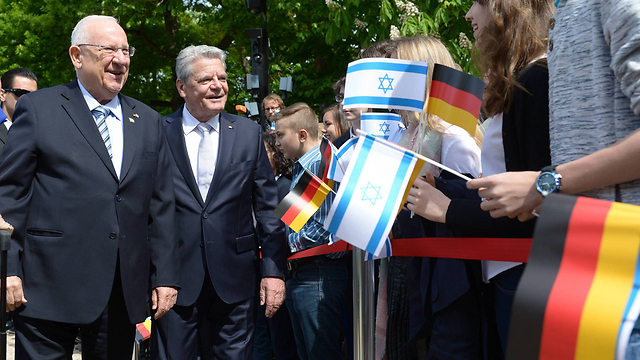 Op-ed: Will the German foreign minister come to Israel’s rescue when dangerous terrorists return to the ‘Palestinian state’ and start firing missiles at Ben-Gurion Airport, Tel Aviv, Haifa and Jerusalem?

“Lasting security for a Jewish and democratic Israel will not be possible without a viable and democratic Palestinian state,” German Foreign Minister Frank-Walter Steinmeier said in a speech to Israel’s citizens in honor of the 50th anniversary of diplomatic relations between Israel and Germany.

Unfortunately, this sentence points to arrogance – once again, a German thinks he knows better than the Jews what is good for them – but also to a blatant intervention in our national affairs.

This resembles a situation in which the Israeli foreign minister would make it clear to the Germans that Germany’s security would be impossible without granting the growing Muslim minority in the country an autonomy and applying the Islamic Sharia law – and such a demand will be made there at some point. The Germans wouldn’t be able to tolerate it – so why are they doing the same thing now to the people they define as friends?

Now let’s examine this intrinsically. Regarding the Palestinian democracy, Palestinian Authority Chairman Mahmoud Abbas completed his term six years ago, after being elected in January 2005 under Israel’s sponsorship. Today he is just a private person. He dissolved the Palestinian Parliament upon its election, after Hamas actually won it, and in any event his term ended five years ago.

There are no elections and there is no Palestinian agreement on elections, because if that happens Hamas will take over everything after brutally taking over the Gaza Strip in 2007. And so Gaza is now controlled by a terror organization, and Ramallah is controlled by a gang which lacks any public and legal legitimacy.

This is their democracy: No preparedness for a state, no institutions, no politics, no sources of income, no parties and no meeting between parties. President Reuven Rivlin with German President Joachim Gauck in Berlin. Are the Germans done dealing with anti-Semitism and the millions of infiltrators in Europe? (Photo: Amos Ben Gershom, GPO)

And as for security, an independent Arab territory in Judea and Samaria means the end of the Jewish state which Germany is allegedly so concerned for. Does the German foreign minister know that the border is supposed to pass two kilometers away from the Knesset, which will be threatened by snipers? That Abbas plans to bring hundreds of thousands and maybe even millions from Syria, Iraq and Lebanon into that territory? It’s “the return,” and these are the most dangerous terrorists, and their missiles will reach Ben-Gurion Airport, Tel Aviv, Haifa and Jerusalem.

Will Mr. Steinmeier come to save us then? Did he work to save the hundreds of thousands of dead people in Syria, Iraq, Libya, Yemen and Egypt? Is he working to save Ukraine? Israel’s tiny size is the most dangerous of all these cases. Would he agree to divide Berlin with the Islamic State according to the quarters’ demography? Jerusalem’s unification was the example for Berlin’s unification, so why does Berlin want to divide Jerusalem?

A reasonable person asks himself why are the Germans so obsessed with the Palestinians, when the latter are the only ones in our region who are living a good and protected life, under Israel’s mercy. There is no occupation here, but rather a rescue, otherwise they would have already grabbed each other in the throat, like what is happening in the entire region around us, which has been destroyed. Syria, Iraq, Libya, Yemen – they have all been destroyed already, with some 10 million refugees and hundreds of thousands of dead people. And maybe this obsession is not with the Palestinians, but rather with the Jews?

And anyway, are the Germans done dealing with the millions of infiltrators in Europe, who are threatening to change its demography? Are they done dealing with the anti-Semitism, which is again striking the Jews on their land? Did they thing they could buy us with a few ships, which can anyway be purchased from a long list of other countries?

When Germany talks about the Jewish state, it has no right to criticize, reprimand, or offer advice, but only to show some modesty. After all, it was Germany, and no other country, which carried out the cruelest evil in the history of humanity, against the Jewish people.