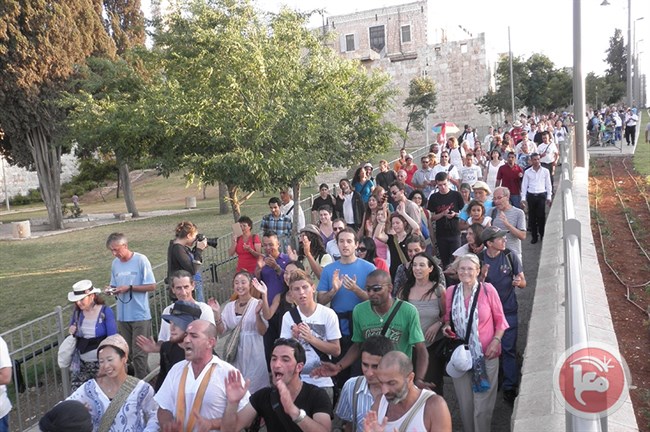 Activists confronted participants in the so-called “Jerusalem hug” march in which Palestinian and Israelis participated in Jerusalem on Thursday.

Palestinians from Jerusalem gathered near Damascus Gate, where the march took place, and started telling Palestinian participants in the event that it had “normalization” goals.
There were minor scuffles and exchanges of swearing between the two sides.

Head of Fatah’s Jerusalem youth council Ahmad al-Ghoul told Ma’an that Palestinian participants in the march — from the West Bank cities of Bethlehem, Ramallah, Nablus, and Tulkarem — were deceived into joining it by luring them with permits to enter Jerusalem.

Al-Ghoul said that the organization claimed that the march was a “humanitarian project for people in the West Bank” and provided them with permits and the necessary transportation without showing them the “normalization” goals of the visit.

He added that such organizations equate the “victim and the executioner” and show the world a picture of Palestinians and Israelis living in peace and love, spending millions of shekels in the process.

Israeli police detained Mahdi Abu Sbeih and Shadi al-Labban, who were trying to stop the march.