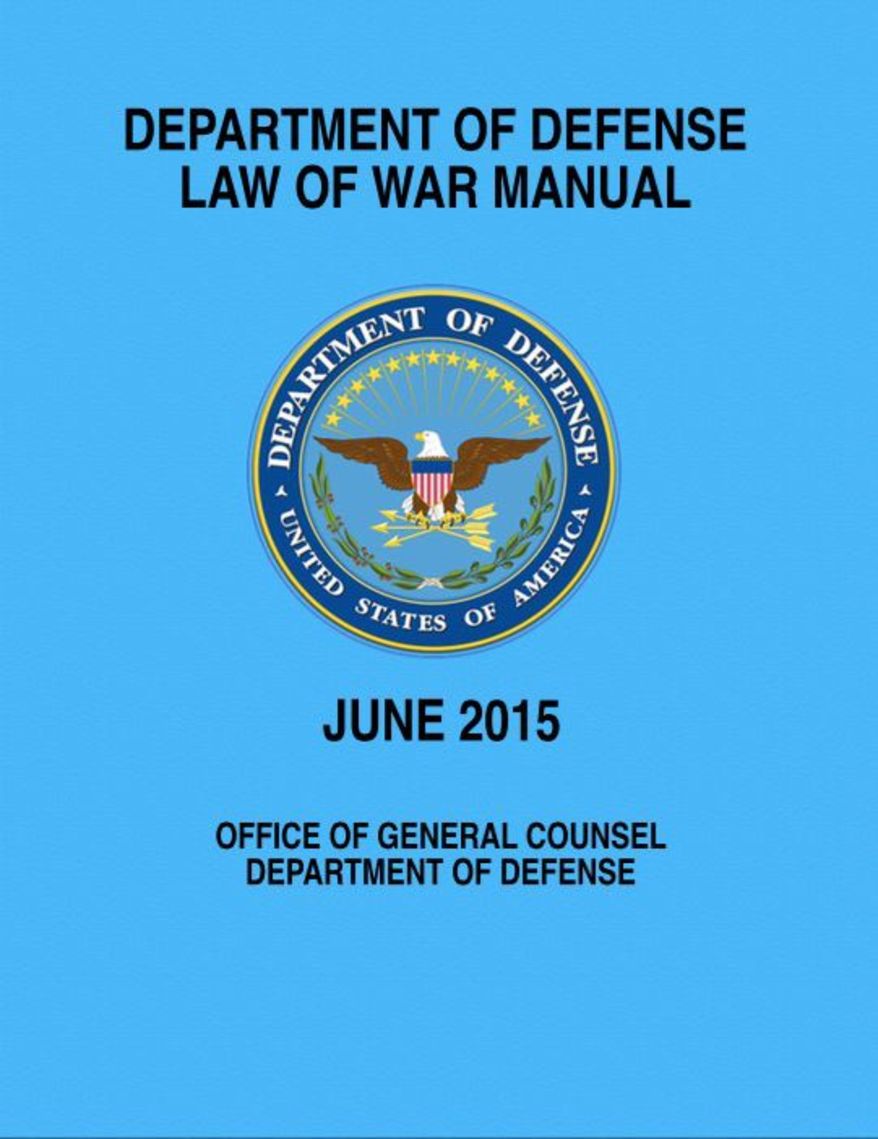 The Pentagon’s new thick book of instructions for waging war the legal way says that terrorists also can be journalists.

The description appears in a 1,176-page, richly footnoted “Department of Defense Law of War Manual” that tells commanders the right and wrong way to kill the enemy. It says it’s OK to shoot, explode, bomb, stab or cut the enemy. Surprise attacks and killing retreating troops also are permitted. But a U.S. warrior may not use poison or asphyxiating gases.

Going back decades, this is the Pentagon’s first comprehensive, all-in-one legal guide for the four military branches, who over the years had issued their own law of war pamphlets for air, sea and ground warfare.

The manual pushes aside the George W. Bush-era label of “unlawful enemy combatant” for al Qaeda and the like. The new term of choice: “unprivileged belligerent.”

An eye-catching section deals with a definition of journalists and how they are expected to stay out of the fight.

Lumping terrorist writers with bona fide scribes prompted one officer to call the paragraph “odd.” A civilian lawyer who opines on war crime cases called the wording “an odd and provocative thing for them to write.”

“It’s a realization that not everyone abides by the same standards we do,” said Mr. Rubin. “Just as Hamas uses United Nations schools as weapons depots and Iran uses charity workers for surveillance, many terrorist groups use journalists as cover.”

“Journalists are the new consultant. Anyone can claim to be one,” he said. “No American serviceman should ever be killed because a politician told them they had to take a foreign journalist at his or her word.”

Army Lt. Col. Joseph R. Sowers, a Pentagon spokesman, explained the reasoning behind the inclusion of “unprivileged belligerents” as journalists.

“We do not think that there is any legal significance to the manual listing unprivileged belligerents as sometimes being journalists because the manual does not, itself, create new law,” Col. Sowers said.

Journalists, propagandists, spies
In the age of attacks by radical Islamic militants, unprivileged belligerents most often fall into the category of terrorists. If captured, they are not entitled to all the rights of a prisoner of war under the Geneva Conventions, are subject to indefinite detention and can be tried by a commission or war crimes tribunal instead of a civilian court.

Perhaps the best-known terrorism publication is Inspire magazine, started by al Qaeda in the Arabian Peninsula (AQAP) and its American-born operative, the late Anwar al-Awlaki.

He viewed the online English language diatribes as a way to recruit Muslims in the West, just as the Islamic State, also known as ISIL or ISIS, sees social media as the means to persuade followers to commit murder in their countries.

“Some people might characterize the persons who put out Inspire magazine as ‘journalists,’ but ‘propagandist’ would be more apt,” Col. Sowers said. “Members of nonstate armed groups, such as al Qaeda, who also do work that could be characterized as journalism, would continue to be unprivileged belligerents notwithstanding their work as journalists. As another example, enemy spies that used journalism as a cover would likely also be considered unprivileged belligerents if they are caught while engaged in espionage.”

The Islamic State has taken the idea of a propaganda sheet such as Inspire and expanded it, times thousands, in waves of social media blasts on Twitter and elsewhere. The aim is the same: spread propaganda about the supposed Muslim utopia being built in Syria and Iraq and recruit terrorists.

A prominent writer for the Islamic State is a British resident who moved his family to Syria. Last month, he published something of a travel guide on Iraq and Syria and how the terrorist group will take care of immigrant fighters as they wage jihad.

“A Brief Guide to the Islamic State [2015]” is written by Abu Rumaysah al Britani, who in Britain went by the name Siddhartha Dhar, according to the Middle East Media Research Institute (MEMRI), which provided an analysis of his guide.

The law of war

“If you thought London or New York was cosmopolitan then wait until you step foot in the Islamic State, because it screams diversity,” al Britani wrote of the self-proclaimed country that routinely commits mass murder. “In my short time here I have met people from absolutely every walk of life, proof that the Caliphate’s pulling power is strong and tenacious. The country has also become a magnet for talent. It has been successful in recruiting skilled professionals that are crucial for state building. Scholars, judges, preachers, soldiers, doctors, data analysts, telecommunication experts, economists, mechanics, chefs, teachers, civil engineers etc. are just some examples that I can rattle off the top of my head, and are also real life examples of people I have physically met.”

MEMRI has identified a number of Islamic State fighters who present themselves as journalists.

Last week, he tweeted an article from a fellow fighter urging women to come to Syria and pledging that the Islamic State-controlled areas of “Sham,” a reference to Syria, are safe: “Daily life goes on for the civilians, the souks open up, the business men go to their offices, the children go to school, and life goes on like normal. I have been in Sham since January 2014 and I have never seen dead bodies lying on the road, or ever had fear of the enemy shooting me while I’m walking the streets “

The Pentagon’s “Law of War Manual” was released by Department of Defense General Counsel Stephen W. Preston, who said the thick booklet represents “many years of labor and expertise.”

“The law of war is a part of our military heritage, and obeying it is the right thing to do,” he wrote in the foreword. “But we also know that the law of war poses no obstacle to fighting well and prevailing. Nations have developed the law of war to be fundamentally consistent with the military doctrines that are the basis for effective combat operations.”

There are many rules.

The manual, for example, states that the only population that is due a warning of attack is civilians.

“The law of war does not prohibit the use of surprise to conduct attacks, such as the use of surprise in ambushes, sniper attacks, air raids, and attacks by special operations forces carried out behind enemy lines,” it states, adding that “combatants need not offer opponents an opportunity to surrender before carrying out an attack.”

As for the shift from “unlawful enemy combatant” and to an embrace of “unprivileged belligerents,” Col. Sowers said the change “is largely a stylistic one.”