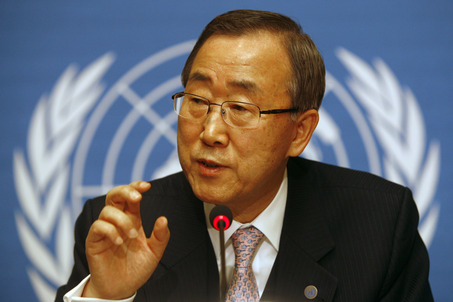 Following is a letter to UN Secretary-General Ban Ki-moon, with a copy to U.S. Ambassador Samantha Power and the ADL, sent today by the Geneva-based non-governmental organization UN Watch.

UN Watch is gravely concerned that the UN’s special relief agency for Palestinians, which received some $400 million from the U.S. last year in exchange for its signed promise to refrain from supporting terrorism and to uphold neutrality, is nevertheless disseminating crude, anti-Semitic caricatures on the Internet that incite to the murder of Jews. We respectfully demand that you take action immediately to remove the images, apply accountability to the highest levels of UNRWA, and apologize.

We call your attention to two of the ten first items appearing on the UNRWA Facebook page of the Rameh school, based in the Jaramaneh camp outside Damascus, which are cartoons celebrating Palestinian car attacks against Israeli Jewish civilians.

One of the cartoons posted by UNRWA resorts to classic anti-Semitic imagery, depicting a hook-nosed ultra-Orthodox Jew dressed in black, with a Star of David marked on his black hat: Another of UNRWA’s images shows cars attacking people, with the caption that translates to “Cars intifada Daes,” using the Ara­bic term “Daes” (Run-over), a play on the Ara­bic word for “Daesh” (ISIS): In these postings, UNRWA joins the terror-inciting social media campaign that praise the Palestinian car attacks such as the one in Jerusalem on 22 October 2014, which killed 3-month-old baby Chaya Zissel Braun, and 22-year-old Karen Jemima Mosquera of Ecuador, and wounded eight others.

This vile cam­paign prais­es car attacks as a form of “resis­tance,” and incites oth­ers to per­pe­trate sim­i­lar attacks and, as documented by the Anti-Defamation League, fea­tures vio­lent expres­sions of anti-Semitism.

Excellency, at a time when UNRWA claims to be in crisis, it is shameful that an UNRWA facility featured on a UN video asking for help for victims in Syria would be the same one engaged in incitement to racism, terrorism and murder.

All of this follows the April report of your board of inquiry which found that UNRWA effectively turned a blind eye to Hamas rockets and other terrorist weapons being stored in its facilities.

The UN cannot demand more and more funding for UNRWA from the U.S. and others while this agency aids, abets and incites to terrorism, murder and anti-Semitism.

Accordingly, we respectfully demand that you take action immediately to remove the images, apply accountability to the highest levels of UNRWA, and apologize.