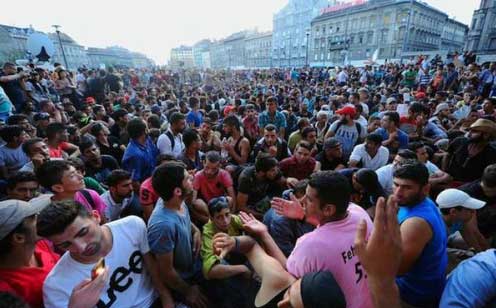 The UN’s humanitarian agencies are on the verge of bankruptcy and unable to meet the basic needs of millions of people because of the size of the refugee crisis in the Middle East, Africa and Europe, senior figures within the UN have told the Guardian.

The deteriorating conditions in Lebanon and Jordan, particularly the lack of food and healthcare, have become intolerable for many of the 4 million people who have fled Syria, driving fresh waves of refugees north-west towards Europe and aggravating the current crisis.

So Gunness decided to do some serious research. On Twitter.

Do any colleagues in #UNHCR @LDUNHCR @melissarfleming or peeps know how many #Palestinians r among those arriving in Europe & elsewhere ? RT

He didn’t get an answer. But he tweeted:

But let’s look at the numbers.

Before the Syrian war, there were about 500,000 Arabs of Palestinian ancestry in Syria, out of a population of about 23 million, or about 2%.

So of the 4 million who have fled Syria, how many are Palestinian? Even if every single Palestinian Arab left Syria that would only be 10% of the total!

But UNRWA is asking for $415 million, and trying to say that if only those tightwad Europeans would pay more to UNRWA, then they wouldn’t have so many refugees beating on their doors!

By any math, this simply is a lie.

This is besides the fact that Gunness is claiming that the reasons Syrians are fleeing is because they don’t have support. That may be part of it, but if barrel bombs are dropping on your town, you would flee away no matter how well-funded the local UNRWA program is.

There are scores of agencies raising money for victims of the Syrian war. UNRWA is trying to take the money that would go to help everyone and redirect it to its own operations which may be important but would barely make a dent in the larger set of fundraising for Syria.

In other words, UNRWA’s Chris Gunness is cynically taking advantage of a true humanitarian crisis by inflating UNRWA’s importance and acting like a baby when the media rightly doesn’t place UNRWA on the top of its list of agencies helping Syrians, a list that is quite long.