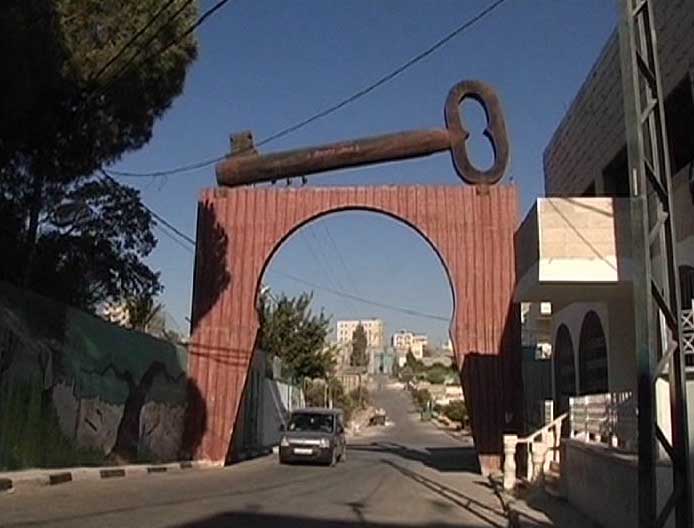 Between the years 2000-2006 The PA introduced a new curriculum to be taught in all schools in Judea, Samaria and Gaza, as well as in schools in East Jerusalem.

Over 250 books for grades 1-12 in various subjects were published within a project partly financed by European countries..

The books are continuously reprinted with some changes, but the fundamentals regarding Israel and the Jews have not been altered: delegitimization of both Israel and of the Jews’ very presence in the country, demonization of Israel and the Jews, non-advocacy of a peaceful solution to the conflict and, instead, emphasis on a violent struggle for the liberation of Palestine without limiting it to the areas of the West Bank and Gaza. Jihad, martyrdom and the so-called “Right of Return” are part and parcel of that violent struggle.

Following are examples taken from the newest versions available that were mostly published in 2012 and 2013.

1. Israel’s establishment in 1948 by virtue of the 1947 UN Partition Resolution is considered “occupation”:

2. The country in its entirety is “Arab and Muslim”, as shown on the map:

“Lesson Four: Palestine is Arab and Muslim”
“The Palestinian people is part of the Arab-Muslim nation”
[The inscription next to the country says:] “Palestine” 3. Palestine replaces Israel in the region:

“I learn
The land of the Levant [Bilad al-Sham in Arabic] presently comprises the following states:
1. Palestine
2. The Hashemite Kingdom of Jordan
3. The Republic of Lebanon
4. The Syrian Arab Republic” (History of the Ancient Civilizations, Grade 5 (2004) p. 30)
Note: Later editions feature “Palestine, Jordan, Lebanon, Syria” only, with no titles. The State of Israel is missing in both versions.

4. The State of Palestine replaces Israel in the following illustration that accompanies a mathematics assignment:

“13. The independence of the State of Palestine was proclaimed in the year 1988 [in Algiers]. How many years have passed since the proclamation of independence?
The answer: …..”

5. Israel’s 6-million Jews are not counted among the inhabitants of the country, while Israel’s Arab citizens are (and note the use of the word “Interior” as an interlocution for Israeli territory): 2. Jews/Israelis are described as invading snakes:

“By your life! How come that snakes invade us…”

Violent Struggle, Jihad, Martyrdom and the Right of Return rather than Peace

1. Jihad in Palestine (the first verse of a poem):

“Lesson 11: Palestine By the poet Ali Mahmud Taha
O brother, the oppressors have exceeded all bounds and Jihad and sacrifice are necessary…”

2. The “Martyr” poem (Excerpts – including a verse directly callimg for martyrdom):

“The Martyr [Excerpts]
…
Hearing [weapons’] clash is pleasant to my ear
And the flow of blood gladdens my soul
As well as a body thrown upon the ground
Skirmished over by the desert predators
…
By your life! This is the death of men
And whoever asks for a noble death – this is it!” 3. Another poetical verse portrays martyrdom as a wedding party:

“O my homeland, I would not cry in this wedding party
For our Arabness refuses that we cry over the martyrs”

4. The violent character of the presumed return of millions of the so-called refugees into present-day Israel: The foregoing examples speak for themselves. They clearly show that the PA does not educate Palestinian children for peace. Rather, the opposite is true. Dr. Arnon Groiss is an Arabic-language journalist who has just retired from the Voice of Israel Arabic Radio after 42-year work there beginning in 1973.

On the basis of his experience in this field, Dr. Groiss was appointed as a member of the Scientific Advisory Panel (SAP) of the Palestinian-Israeli Schoolbook Research Project commissioned by the Council of Religious Institutions of the Holy Land (CRIHL). The project was funded by the US State Department and ended in February 2013. Dr. Groiss’ evaluation paper of this research project is to be found at

Dr. Groiss is currently retained by the Nahum Bedein Center For Near East Policy Research.
.