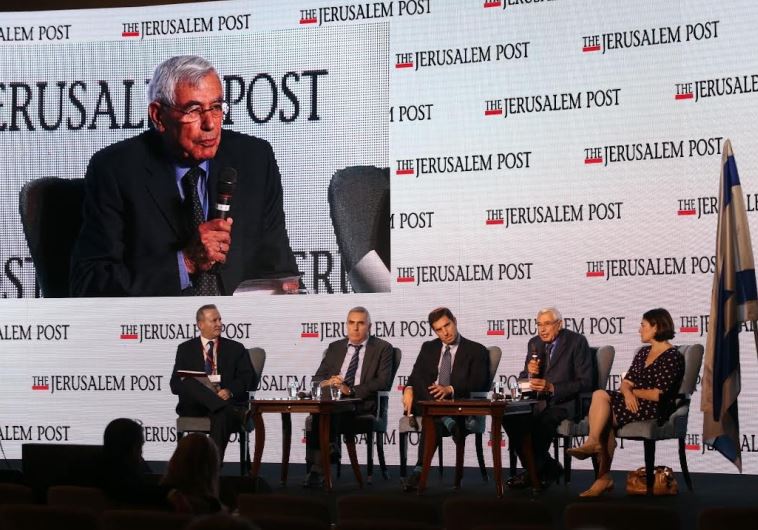 The conference was held this week and attended by the diplomatic corps as well as foreign and local media. J-Wire’s Michael Kuttner was there and has filed this report:An interesting line up of speakers guaranteed an interesting day and so it proved.

Anyone who has ever attended an Israeli wedding will know that the chuppah never commences at the advertised time and the same can usually be said for other events. Advertised to start at 9am, attendees were told to arrive already at 7am because of the delays anticipated by security checks and a very tight schedule. As the Prime Minister was due to speak, security was stricter than usual but arriving at the crack of dawn seemed a bit over the top. Obviously others thought the same and as a result the conference only started at 9.30am. By the time the last speaker had spoken we were running an hour late.

It did not worry me as I had a free day but for participants with other commitments it must have caused chaos.

The first speaker featured was the Leader of the Opposition, Yitzhak Herzog. Predictably he rejected the PM’s assertion that peace is unattainable at the moment and optimistically maintained that most of the Arab world realized that Israel is here to stay. While believing that terror must be combated he also articulated the usual leftist belief that those who incite and murder must be given a diplomatic vision which would presumably then turn the murderers into peace partners. Although he received a polite round of applause at the end of his speech I doubt very much that apart from members of the diplomatic community and like-minded media journalists, many others in the audience were convinced.

Next up was Yuval Steinitz, Minister of Energy, who spoke about opportunities presenting themselves as a result of the discovery of large gas resources. He also, as did every speaker, express sympathy for the victims of Islamic terror in Paris.

The Minister of Justice, Ayelet Shaked, reiterated her commitment to combat terror groups, labeling of Israeli products and making anti Israel NGO’s accountable for the funding they receive from foreign sources.

The French Ambassador and Prime Minister Netanyahu took the podium together. The audience was asked to stand for a minute of silence in solidarity with the victims of the Paris terror. Monsieur Maisonnave then assured us that Israel did not stand alone as it faced terror. He reiterated that France was now at war with ISIS and would do whatever it takes to defeat them. There is no doubt that he feels deeply about the dangers France and Israel both face but it will take more than rousing rhetoric to convince most Israelis that Europe really understands and supports us.

The Prime Minister was then interviewed by the JP’s diplomatic reporter. In a series of questions and answers he laid out his assessment of the current situation and prognosis for the future. Traversing the full range of problems confronting Israel such as terror, peace prospects, Abbas, boycotts, security and the economy, several significant points stood out. First, is an uncompromising war on terrorists and their supporters. Second, condemnation of the EU labeling policy and a promise to fight this blatant bias. He reiterated that Israel’s economy was strong and that any boycotts and labeling would only hurt the Palestinian Arabs themselves. As far as peace was concerned he remained ready to engage Abbas in meaningful talks but that the PA leader refused to sit down and discuss anything which might require compromise and an end to the conflict. It was vital to remain rooted in reality and not be mesmerized by pie in the sky balloons detached from earth. An interesting comment was Bibi’s reference to possible unilateral moves in the face of continued Palestinian Arab intransigence. While expressing an aversion to such moves he did say that perhaps certain conditions might cause steps to be taken in the future which most people would not have anticipated.

Next speaker was Naftali Bennett, Education Minister and leader of HaBayit Yehudi Party. His aim was to provide an education system which amongst other things would enable Israeli Arabs to gain meaningful employment and take their place as productive and loyal citizens of the country. Not mincing his words he made it clear that those who plotted against the State would be dealt with and that he and his party were adamantly opposed to the creation of an Iranian sponsored terror State in the heartland of Israel.

A panel discussion then took place on the future prospects for Israel following the discovery and utilization of large gas fields. Handled properly these discoveries and hopefully more to follow would give Israel enhanced economic and strategic independence.

Major General Amir Eshel, Israel Air Force Commander, gave a presentation on strategic challenges facing Israel and how the IDF and in particular the Air Force were planning to cope with an increasingly volatile and menacing scenario.

The US Ambassador spoke next and after the usual platitudes about Israel/US solidarity and support, spent the rest of his time extolling the triumphs and wisdom of Administration policies. Assuring the audience that Israel was the beneficiary of enhanced security co-operation and aid, he waxed eloquently about our mutually shared aspirations.

Caroline Glick of the Jerusalem Post delivered a damning condemnation of the EU’s recent moves against Israel and its hypocrisy and double standards when dealing with the Jewish State.

The final presentation of the day was a speech by the EU Ambassador to Israel, Lars Faaborg-Anderson. It was no surprise that he vehemently refuted all accusations made against the EU and tried to convince listeners that labeling was really a consumer protection law. Undoubtedly sincere in his beliefs there could have been very few who were convinced by his assertions of European solidarity and even handedness.

If nothing else, this array of speakers provided an opportunity to hear widely differing opinions, learn a few new facts and enable participants to meet and network with others, locally and from overseas.