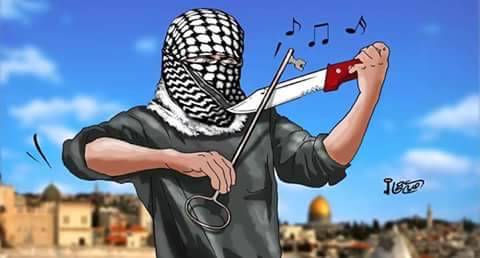 In spite of UN assurances to the contrary, Jew hatred and incitement to violence continue to grace the social media threads of teachers employed by the international body, pro-Israel blogger Elder of Ziyon reported on Wednesday.

The latest example highlighted by the anonymous blogger can be found on the Facebook page of Zia al Talouli, a teacher for the United Nations Relief and Works Agency (UNRWA) at the Beit Hanoun Elementary School in Gaza. Along with a photo of himself and a group of his young pupils engaged in a cheerful outdoor exercise, Talouli posted a cartoon of a terrorist – whose face is masked with a keffiyeh – playing a knife as though it were a violin, using a key (the Palestinian symbol for returning to their “homes” in the entire state of Israel) as a bow.

The knife imagery has become a common theme on social media, representing the stabbing attacks that best characterize the current surge in Palestinian terrorism that began in September. In fact, the cartoon itself has been circulating for several weeks.

An additional cartoon on his page illustrates “Palestinian reconciliation” – in the form of a handshake in the shape of a gun – shooting at the Israeli flag. The implication is that internal Palestinian strife, as between Fatah and Hamas, is set aside for the common cause of fighting Israel.

Elder of Ziyon asks rhetorically what one thinks this UNRWA educator is teaching his students.

This question was at the root of a number of complaints lodged by the Geneva-based non-profit human rights organization UN Watch to Secretary-General Ban Ki-moon about UNRWA teachers’ open encouragement of the killing of Jews. It was also behind UN Watch executive director Hillel Neuer’s warning to the United States and Europe – UNRWA’s largest donors – about where their more than $1 billion annually is going.

Neuer’s persistence has had a number of consequences. The first was an attack on his integrity, launched on Twitter by UNRWA Spokesman Chris Gunness, who told The Algemeiner in September that UNRWA “always investigates credible reports of neutrality violations by our staff and take appropriate action, including disciplinary action, where violations by UNRWA staff members are established. Our position on racism is clear. We condemn racism in all its forms.”

This comment came on the heels of a series of tweets by Gunness attacking Neuer, rather than addressing the issue.

The second was a very brief lull in the number of social media posts with blatantly antisemitic memes and caricatures. As Elder of Ziyon noted in November, “Many of the people I exposed have taken out their association with UNRWA in their profiles, and others took their pages down altogether.”

Still, Elder of Ziyon added, UNRWA has refrained from acknowledging that the phenomenon is widespread, and never comes out and calls for a halt to anti-Israel incitement.

To illustrate, he pointed out a passage of a speech delivered to the UN General Assembly on November 9 by UNRWA commissioner-general Pierre Krähenbühl:

UNRWA continues to operate in a highly polarized environment where emotions frequently run high. We enforce neutrality within our organization, but we are not immune from the context. There have recently been allegations of inappropriate statements by UNRWA staff, notably on social media. Let me state here unambiguously that UNRWA condemns any form of antisemitism or racism and its position on this issue is a matter of public record. We take every allegation seriously and when credible investigate it and will continue to take disciplinary actions as required.

The subsequent cropping up of many new antisemitic posts on social media by UNRWA teachers spurred Neuer to submit a report on November 30 to Ban Ki-moon, Krähenbühl, EU foreign affairs commissioner Federica Mogherini and US Ambassador to the UN Samantha Power, listing 10 egregious examples.

These included an UNRWA English teacher saying it’s important to know that “the Zionists and the Jews are sons of monkeys and pigs.”