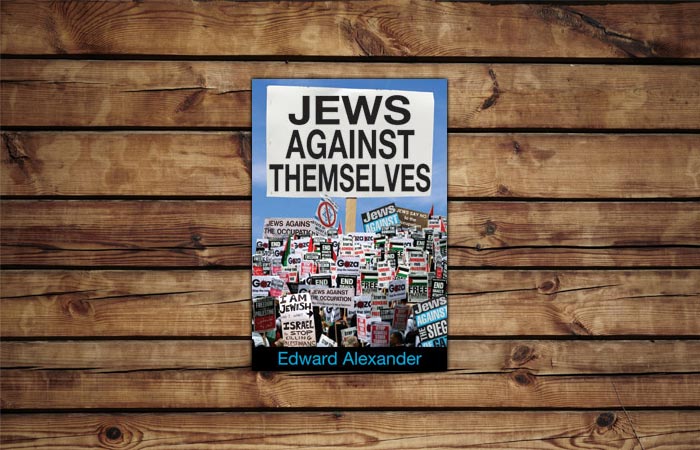 Jews Against Themselves is about the new forms taken by Jewish apostasy in an age when Jewish existence is threatened more starkly and immediately than at any time since the Hitler era.

Despite this, there will always be readers who express astonishment that there are Jews who question the Jewish right to live as a natural right, or hate Israel and are ashamed to have a state. Surely they are as rare as singing mice or card-playing pigs?

There are important differences between apostates like Pablo Christiani or Abner of Burgos of medieval Europe and Marc Ellis or Daniel Boyarin of modern America. Nevertheless we may say of those Jews who have, over the centuries, defamed, abandoned, and harmed their own people: “Plus ça change, plus c’est la même chose.” The broadest definition of their apostasy, and one that does not even mention conversion to Christianity or Islam, was given in the Middle Ages, by none other than Maimonides (1135–1204), and it still holds:

One who separates himself from the community, even if he does not commit a transgression but only holds aloof from the congregation of Israel, does not fulfill religious precepts in common with his people, shows himself indifferent when they are in distress, does not observe their fasts, but goes his own way, as if he were one of the gentiles and did not belong to the Jewish people—such a person has no share in the world to come.

Below is an exclusive excerpt from Jews Against Themselves:

My most vivid and satisfying memory of growing up in the Brownsville section of Brooklyn dates from May 1948, when I was eleven and a half years old. Jackie Robinson, who then lived adjacent to my high school, was beginning the second year of his brilliant career with the Dodgers, and for me and most of my friends, he was the greatest man in the world. Coming a close second to Robinson in our esteem was David Ben-Gurion, whose declaration that month that the Jews, like other peoples, now had a state of their own, ignited dancing in the streets.

These two heroic figures came together for me almost magically when I heard Robinson address a block party (either on Amboy Street or the adjacent Hopkinson Avenue) to celebrate Israel’s independence.
I consider myself lucky never to have been disillusioned about what my parents taught me: that both men symbolized the belated righting of ancient historical wrongs, that Robinson was indeed a uniquely
courageous figure and that the birth of Israel just a few years after the destruction of European Jewry was one of the greatest affirmations of life ever made by a martyred people, indeed what Ruth Wisse would later call the most hopeful sign for humanity since the dove came back to Noah with an olive leaf after the primeval flood.

Elsewhere in this book the reader will come upon Jewish memoirists who regret that their 1940s interest in baseball was a distraction from Jewish concerns, but my experience was the opposite. The linkage between Jewish and Negro rebirth was reinforced in my Hebrew school (providentially located on 500 Herzl Street) by Principal Rabbi Z. Harry Gutstein’s system of rewards for boys who could recite the Shema from memory or show mastery of Hebrew conjugations: good work was rewarded with points that could lead to tickets to Dodger games. Some years later I also came to understand that one reason why Brooklyn (and not Boston or Philadelphia or St. Louis) became the site for the experiment in integrating baseball was precisely its large Jewish population and its sense of brotherhood with the Negro. “Bliss was it in that dawn to be alive, and to be young was very heaven.”

But, like Wordsworth, I was to be disillusioned not by Israel, which has had to mobilize for, and survive, sixty-six years of relentless military and ideological onslaught, such as no other nation has endured (or could endure) but by Jews of the progressive persuasion. They have not only failed to mobilize their intellectual resources on behalf of a constantly besieged country, but have abandoned it to, where they have not actually joined, its enemies, and become “Jews against themselves.” Who among us could have imagined that liberalism, which so many modern Jews have adopted as their raison d’etre, would itself become dogmatic, would acquire a craving for forbidden fruit (and its legalization), and–this above all–would abandon the Jews, and turn against Zionism and the state of Israel? Ian Buruma did not exaggerate when he wrote, over a decade ago, in the New York Times Magazine, that the Palestinian cause has become the universal litmus of liberal credentials. (To readers of that newspaper, of course, this must have seemed the most banal of commonplaces.) Which of us youngsters was even aware of Zionism’s emphasis upon “negation of the Diaspora” lest the Diaspora negate Zionism? Indeed, how many adult Jews in 1948 could have imagined that the Holocaust would cast its specter of blood and shame over the Jews well into the next century, that its lesson would be not “Never again,” but–for the victims–“It happened once, it can happen again” and–for the perpetrators–“We did it once, we can do it again.”

Jews Against Themselves, by Edward Alexander is available for purchase here. (Paperback, May 2015. 181 pages.)