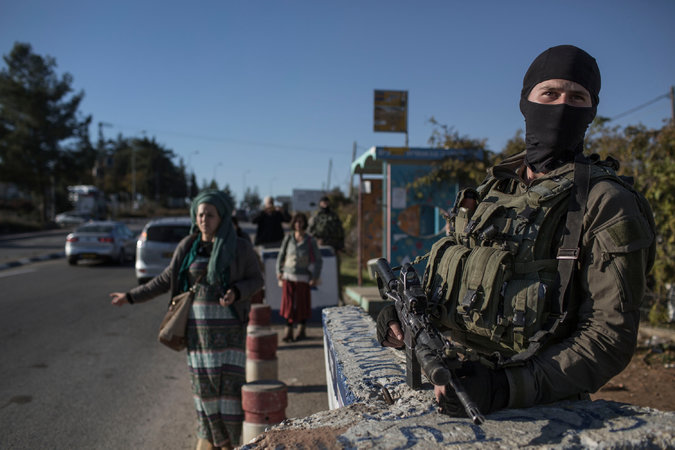 [In this article, “West Bank Shopping Complex, a Symbol of Coexistence, Is Shaken” published on December 14, 2015, New York Times writer Isabel Kershner correctly  depicts the disappointment that Jewish and Arab residents of Gush Etzion have been feeling these days, as they witness  tranquil setting of coffee shops and grocery stores that has been thrust into sudden turmoil of terror and confrontation. Sensitive human interest stories like this are appreciated at a  time when people in the Gush sometimes wonder if anyone knows what they are  going through. David Bedein]

GUSH ETZION JUNCTION, West Bank — On a recent crisp afternoon, a gleaming new Israeli supermarket opened its doors at this West Bank crossroads, a once-congenial meeting spot for Israelis and Palestinians that now resembles a battleground.

The supermarket, a branch of the Shufersal Deal chain, will compete with the Rami Levy store, an Israeli chain that has been the anchor of the shopping center here.

In addition to cut-price groceries, Rami Levy championed the idea of coexistence in this part of the Israeli-occupied West Bank, proudly advertising that half of its 120 employees were Jews and half were Arabs.

Yet amid a recent surge of violence, the manager of the new market, himself a resident of a nearby Jewish settlement, Efrat, has a very different sales pitch: Ninety-nine percent of his employees are Jewish settlers. While anybody is welcome to shop at the store, he said, only a few Arabs, veteran employees of the Shufersal chain, have been hired.

The mother of Abdulrahman Obeidallah, 13, who was killed by Israeli forces, at his funeral on Tuesday near Bethlehem.Fears of New Intifada Accompany Surge in Mideast ViolenceOCT. 6, 2015
A Palestinian woman watched an Israeli boy lighting candles at the site of a stabbing attack in Jerusalem this month.The Dueling Narratives of the Israeli-Palestinian ConflictOCT. 27, 2015
“That was my decision,” the manager, Rami Kaminsky, said as he watched a trickle of curious customers the day after his store’s opening. “I hope the fact that my workers are Jews will make people feel more comfortable.”

Rami Levy pioneered the retail boom at Gush Etzion Junction, opening about six years ago when the only other business was a gas station. The commercial center that has arisen piecemeal since includes a natural foods store, a bakery, a restaurant and auto repair shops that all employ and cater to both Jews and Palestinians.

Jewish settler leaders have promoted the slightly shabby complex as a symbol of peaceful coexistence and evidence that Israelis and Palestinians can share the hotly contested territory.

During the last two months, however, Palestinians have carried out about 10 attacks in the vicinity of the Gush Etzion junction, using knives, guns and even vehicles as weapons.

Masked, heavily armed Israeli commandos now stand guard at the crossroads, which has been fortified with cement barriers.

An eyewear store was closed for several days because the Jewish salespeople were afraid to come to work, according to employees. Palestinian customers have largely disappeared from the junction, and those who do show up are instructed to park their cars outside the compound. That restriction was imposed after a Palestinian man arrived in a taxi in late October and attacked an Israeli woman between Rami Levy and the bakery, stabbing her in the back.

She survived. But another woman, Hadar Buchris, 21, was fatally stabbed near a bus stop in November. Days earlier, a Palestinian gunman killed an Israeli settler, an American student and a Palestinian driver from Hebron as they waited in traffic approaching the junction.

And hours before the festive opening of Shufersal, a 16-year-old Palestinian boy from a nearby village tried to stab a man on the main road. He met the same fate as many of the assailants: Israeli forces shot him dead.

Shopkeepers and residents are now questioning if the attackers choose the junction because its image as a hub of coexistence made it a target.

“There are people who want to ruin it,” said Yisrael Rahamim, 60, a resident of Efrat who was volunteering at the “Warm Corner,” a rest stop for soldiers at the junction. Mr. Rahamim said that Palestinians from Hebron used to come by the busload, “like tourists.”

“Now it is deserted,” he said, noting that many of the assailants had been from the Hebron area.

Gush Etzion, or the Etzion block, a cluster of more than a dozen Jewish settlements, lies south of Jerusalem, in the Bethlehem area. It is often described as part of the Israeli “national consensus,” a chunk of West Bank land seized from Jordan in the Arab-Israeli War of 1967 that many Jewish Israelis assume will always be part of Israel, and it holds a special status in the country’s psyche, associated with tragedy and triumph.

The first Jewish settlers arrived in the 1920s. Four communities were established by the 1940s but they were destroyed in the war of 1948 over the creation of Israel. Jordanian forces killed scores of Jews who tried to defend the area and took scores more captive.

After Israel captured the West Bank in the 1967 war, a group of Israelis, including some descendants of those who had fought to defend it in 1948, reestablished Jewish settlements there.

The Palestinians and much of the world consider all settlements in the territories seized in 1967 as illegal and an obstacle to establishing a Palestinian state. While most peace plans envisage exchanges of land that could leave at least part of Gush Etzion under Israeli sovereignty, Israelis and Palestinians have never agreed on the size of the block.

The American student, Ezra Schwartz, 18, of Sharon, Mass., was fatally shot when he and several friends went to volunteer at a park, Oz Ve’Gaon, that had been established in memory of three Israeli teenagers who were kidnapped and murdered last year by Palestinians while hitchhiking in Gush Etzion. The Haaretz newspaper described the park as an unauthorized settlement outpost that is in the process of obtaining approval from Israeli authorities.

Some Jewish clientele have stayed away from the junction recently because of the violence. Tali Netanel, 50, a teacher, and her sister were sitting alone outside the English Cake bakery sipping cappuccinos and eating Hanukkah doughnuts. “There is fear,” she said. “But clichéd as it sounds, we carry on.”

Eli Sharon, the Israeli deputy manager of the store, said, “Relationships have been formed here, and most of the time they are normal. But when you hear shots outside everybody is in a panic — the Jews, the Arabs and the soldiers.”

In ordinary times, he said, you might see settlers and Palestinians from Hebron discussing a special offer or the pros and cons of a particular baby formula.

Shadi Ghnaim, 33, the Palestinian manager of the cleaning department, said, “Outside there are soldiers and security checks. They are scared of us, and we of them.” Inside the store, he said, “nothing has changed.”

As for the symbol of coexistence Fadi, 31, a Palestinian cashier, said the junction was now “a hostile environment for both sides.”

“I don’t think the occupied people are happy at being occupied,” he said, asking that only his first name be used to avoid problems with his neighbors, given the Palestinian campaign to boycott Israeli products and avoid working in settlements.

“But,” he added, “some Palestinians living here say this conflict will never end, we just want to live our lives.”

Over at Shufersal, three young Palestinian men were wandering the aisles. They were workers from Rami Levy who had come to check out the competition.