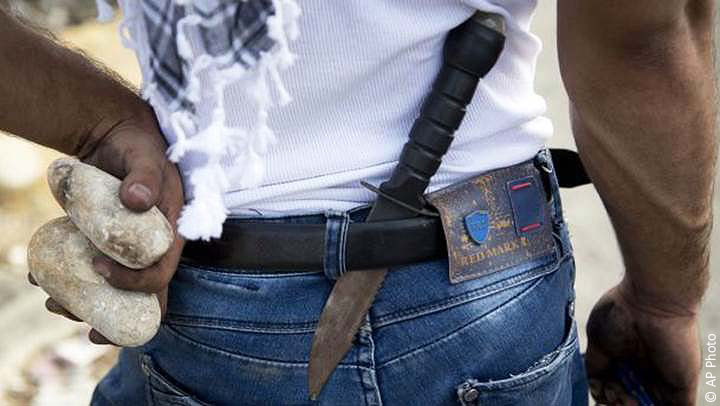 I run one of the few news agencies and research centers in Israel that   regularly interviews officials of Hamas, Fatah and NGO’s , who openly endorse the murder of Jews.

Our films which speak for themselves, where matter of fact calls to murder Jews emanate from Israel’ s antagonists like clock work, very openly, and without hesitation.

Pay attention to our interviews with convicted murders who express no regret for their actions:

Only yesterday, in preparation for our newest film, the administrator of an NGO, which helps descendants of Arab refugees in UNRWA facilities, gave our interviewed a taped interview in which this social worker endorsed acts of murder…in the context of the ‘right of return’ by force of arms.

Yet perpetrators of the call to kill Jews conform to charters of the Arab league, the PLO and Hamas, all of which state that their purpose in terms of their war aim, which has not changed since 1948; to expunge the Jews from Palestine

What about the Declaration of Principles signed by Arafat and Abbas in Oslo and in Washington in 1993?

Who revealed that the PLO did not ratify the DOP?

None other than Al HaMishmar, the now defunct daily newspaper of Mapam, the news anchor of the Meretz pro Oslo accord political party.

Al Hamishmar correspondent Pinchas Inbari covered the PLO-non-approval of the Oslo accord. And which academic revealed that the PLO charter was never cancelled?

None other than Prof. Yehoshua Porat, who ran as no. 13 on the Meretz ticket in 1992, who missed a seat in the Knesset by less than 500 votes.

Prof Porat viewed the protocols of the session where the PNC was supposed to cancel the PLO charter on April 24, 1996, where our agency had the only crew that filmed the non-event

Simply put, the PLO never ratified the accord and never cancelled its war covenant to destroy Israel

I am often asked what would deter the PLO, Hamas and the Arab League from endorsement these acts of murder.

The answer is clear: Death.

In a war, you kill your enemies until the enemy surrenders.

What deterred Sheich Achmad Yassin, the paraplegic head of Hamas. from continuing his rants to murder Jews?  A condemnation by Israel, or by the UN?

Hardly. What snuffed out Yassin was a carefully targeted missile, which blew Yassin and his wheel chair to kingdom come.

What price did Israel pay for killing Yassin?  Very little.

A case in point: On the morning that  the news broke that Israel had missiled yassin to death, I was visiting Mom, may she rest in peace, who lived in Philadelphia, located on the west bank of the Delaware River. I opened up the Philadelphia Inquirer, to see the press reaction of the newspaper of record in the City of Brotherly Love.

My eyes glanced at the headline: ATROCITY, as I prepared my nerves for yet another round of uneven handed reporting.

However, when I read the headline closer, the article was referring to the popular response to the destruction of the Philadelphia sports arena, where the Phillies, Eagles, 76ers and Flyers all had played. Philadelphians described the implosion of their holy sports facility in terms of an  ‘atrocity’,

Further down on the page, the Philadelphia Inquirer ran a smaller headline: ISRAEL KILLS TERRORIST, with no tendentious emotion whatsoever attached to the piece.

Just the facts. Yassin endorsed the murder of Jews and  paid the price for doing so.

12 years later, on the morning before Passover, in an item carried by all wire services, all Hamas leaders endorse the latest bus bombing in Jerusalem, while a dozen Jews of all ages are maimed for life from their wounds, as they prepare to spend Pesach writhing for the rest of their lives in pain instead of reciting the Hagadah at the Seder,

And what is the message, 12 years later?  This is the time for those who seek justice in the Middle East to demand of the government of Israel to permanently deter anyone who endorses the attempt to murder Jews. The way to deter murder is to invoke the legacy of Sheich Yassin

Israel’s current government is led by politicians who are sensitive to public pressure.

The time has come, on the eve of Passover, to let the government of Israel know that the death of those who endorse the murder of Jews would be a welcome moment in Jewish history.

In earlier generations, when Jews would read from their Hagada that “in every generation there are those who rise up to obliterate the Jews…” the Jewish people would have no recourse but to pray to God and hope for the best. Now the Jews have an army, which awaits its order to fire from above.

This is the time for people around the world to remind the government of Israel that it will pay no price whatsoever if the Jewish state were to kill its enemies, at this stage of the war… to silence those who endorse the wanton murder of Jews.

Sheich Yassin was deterred. He can no longer rally his people to murder Jews.

Sheich Yassin was a religious man who believed that he would be rewarded in his world to come.

Why should anyone who endorses murder not be silenced?

For those liberal minded folks who object to  targeted killings, Israel can use liberal terminology and call it : The Movement for Post Natal Abortions of Israel’s enemies.. or.. All the Noose That’s Fit to Print.