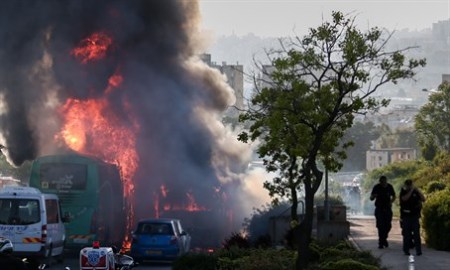 On April 18 Abd al-Hamid Abu Spour, a 19 year old Palestinian Arab, destroyed two public transportation buses in Jerusalem. There were numerous injuries, two of whom remain hospitalized, one with severe burns.  This was the first bus attack during the 7+ month long intifada being waged against Israelis, which has resulted in at least 34 deaths to date.

The one person killed in the attack was the perpetrator himself. All Palestinian factions welcomed the attack. In the eyes of many Muslims, dying while committing a terror attack means Abu Spour is a “shahid,” or martyr for Allah.

His family has lashed out saying he acted in “self-defense,” and “only you Israelis are guilty.” Such inflammatory rhetoric while disturbing, is not unusual from many Arab Muslims. However in this case reaction to the attack has gone beyond the family. It has taken on an official flavor.

On Monday, a week after the attack, a gathering took place at the UNRWA refugee camp in Aida, near Bethlehem. The location has a huge monument of a lock and key, symbolizing the defiant goal that the Palestinian Arabs will one day root out the Jews and take over the land they believe belongs to them.

The “festivities of the martyrs” event took place under the aegis of UNRWA (United Nations Relief Works Agency).  To think the official body representing the world’s community of nations is celebrating terrorism is bad enough. However, that is not the worst of it. The number 1 financial donor to UNRWA is the US, by far. The EU and UK are #2 and #3 in financial support. Their combined total represents over 50% of UNRWA’s donor support.

US and UK citizens should ask themselves how they feel about having their hard earned taxes paying for events that honor terrorists.

Aside from this there is another troubling element to the UNRWA sponsored event.

One might think a public event honoring terrorism sponsored by a branch of the United Nations would be widely covered by the media. Yet, when it comes to the Arab-Israeli conflict most of the world’s media seems to come under a spell of double standard. The abnormal becomes normal, the unacceptable turns into acceptable, and the victim is often seen as the bully.

There was virtually no media coverage of this publically supported terrorist-honoring event. One journalist, David Bedein who runs the Jerusalem based Israel Resource News Agency, did send a crew to cover it. According to Bedein, the crew didn’t just cover the event; they were interviewing the family of the terrorist. Soon they plan to release a film that will be screened at a forthcoming session of the Middle East Subcommittee of the US House Foreign Affairs Committee, when the debate on further US funds for UNRWA will be discussed.

On March 22, Bedein appeared in a closed session of that Middle East Subcommittee and suggested an UNRWA REFORM POLICY INITIATIVE formula as a new funding framework. This would make US financing for UNRWA contingent upon them taking concrete measures to assure transparency. It would also require a crackdown on UNRWA hosting terror entities in its midst, and the re-education for UNRWA residents. Currently they are promised the ”right of return” to villages that existed before 1948. The committee is chaired by Rep. Ilena Ros-Lehtinen (R) FL.

Senator Jim Risch (R- Idaho), chairman of the US Senate Subcommittee for the Near East, also met with Bedein in Washington. This week Senator Risch issued a statement that “we are looking to write a letter to the Government Accountability Office (GAO) to get them to update the audit of US monies that go both to UNRWA as well as funding for education related issues that the GAO had performed several years ago”.

Regarding media coverage, Bedein sent out a press release to over 600 journalists throughout Israel, informing them of the UNRWA event honoring the terrorist. Incredibly he received a reply from only one. This yawn by the media is yet another disturbing reminder of the double standard Israel receives from most of the world.

Picture this:  Suppose there was an event held in the US at a public school, sponsored by the Department of Education (using taxpayer money) honoring the Muslim couple who murdered 14 people in San Bernardino last year.  How much media coverage do you think there might be? Not only that, but those who were responsible for holding the event might be have some serious explaining to do, even in this era of political correctness.

Not so in the Arab-Israeli conflict, where it appears the media seems to have largely taken up the narrative of the perpetrators of terrorism.

There is no moral equivalence between terror and justice. It’s high time the UN stop making an exception when it comes to Israel.

Dan Calic is a free-lance writer, history student and speaker. For more of his articles visit his Facebook page.