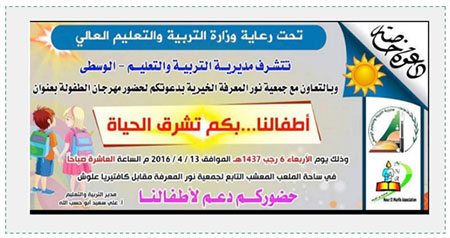 1. Events were recently held in the Gaza Strip as part of the 8th Children’s Festival. They were exploited to indoctrinate Gazan kindergarten children with hatred and the use of violence against Israel. One of the tactics used was having displays put on by masked, uniformed children armed with plastic rifles who simulated a variety of military activities against “Israeli security forces.” In one display children acted the parts of Abu Obeida, spokesman for the Izz al-Din Qassam Brigades, Hamas’ military-terrorist wing. The events were sponsored by two charitable organizations: the Hamas-affiliated Islamic Society,[1] which was outlawed in Israel; and the Nour el-Marifa Association, headed by a senior official in the Hamas-controlled and -supervised education system in the central Gaza Strip.

2. The following were two of the events held during the Children’s Festival:

1)      On April 13, 2016, the Nour el-Marifa Association sponsored an event in the Nuseirat refugee camp, attended by kindergarten children from the central Gaza Strip. They children put on a number of displays, including one in which they played the parts of armed IDF soldiers imprisoning Palestinian prisoners. In another Palestinian children “defended” the Temple Mount. Another display was a simulated press conference of the sort customarily held by Izz al-Din Qassam Brigades spokesman Abu Obeida (Facebook page of Nour el-Marifa, April 19, 2016).

2)      On May 5, 2016, the Hamas-affiliated Islamic Association sponsored an event in Khan Yunis in which Gazan kindergarten children put on various displays. In one of them children dressed in uniforms and armed with plastic rifles emerged from a tunnel and simulated the abduction of an IDF soldier. In another they threw stones at “IDF soldiers” (YouTube, May 5, 2016). An invitation from the education administration in the central Gaza Strip to the general public to participate in the Children’s Festival held on Nour el-Marifa Association’s lawn (Facebook page of Nour el-Marifa, April 10, 2016).

1)   A simulation of IDF soldiers imprisoning Palestinians: Children sat in a tent and pretended to be Palestinian prisoners. The sign on the tent read, “Freedom has no price.”
2)   A display in which Palestinian children “defend” the Temple Mount from Jews: The players included a Palestinian child dressed as an ultra-Orthodox Jew with sidelocks (Facebook page of Nour el-Marifa, April 19, 2016). “Protecting the Temple Mount from Jews.” At the right is a child dressed as an ultra-Orthodox Jew (Facebook page of Nour el-Marifa, April 19, 2016).

6. Abd Jalil Abdul Hamid Ghorab, Nour el-Marifa Association head, gave a speech in which he praised the displays and the children who had presented them. He said the displays “…send a strong message to the [Israeli] occupation and the world that the killing and siege [of the Gaza Strip] will not kill the children’s determination and creativity.” He added that the displays sent the message that the children would preserve the “principles” and “rights” of the Palestinians and transmit them to the coming generations.

7. The Islamic Society is a charitable organization in the Gaza Strip affiliated with Hamas(see Appendix). On May 5, 2016, its branch in Khan Yunis organized an event for the Children’s Festival called “A smile of hope.” The event was attended by public figures, representatives of charitable organizations operating in the Gaza Strip, educators and local residents. Children from Islamic Association kindergartens in Khan Yunis put on a number of displays, including the following (YouTube, May 5, 2016):

1)      Children dressed in military uniforms and armed with plastic riflesemerged from a “tunnel.” They abducted an “IDF soldier” from an “Israeli tank” and used the tunnel to “take him back” to the Gaza Strip.