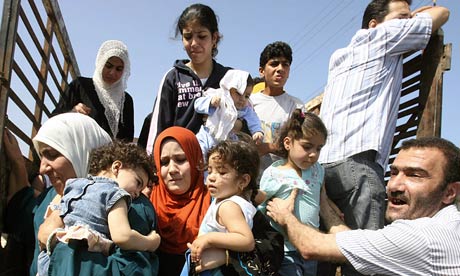 According to the first US Ambassador to Israel, James McDonald’s My Mission in Israel (published in 1951, pages 174-6): “The refugees were on [Arab leaders’] hands as a result of a war, which they had begun and lost…. Most Arab governments show no real concern for the refugees….”

The Cyprus-based British Near East (Arab) Broadcasting reported on April 3, 1949: “The Arab Higher Committeeencouraged the refugees’ flight from their homes.” The Commander-in-Chief of the invading Arab military force, Fawzi el-Kaukji, a known Nazi collaborator, threatened in August, 1947: “Should the UN vote the wrong way [to establish a Jewish state], we will initiate a total war… murder, wreck and ruin.” On November 24, 1947, the Acting Chairman of the Palestinian Arab Higher Committee, Jamal Al-Husseini threatened: “Palestine shall be consumed with fire and blood if the Jews get any part of it.”

The saga of the 1948/49 Arab refugees has been systematically sustained, distorted and abused – by the Arabs, the UN in general and UNRWA in particular – in order to dehumanize Israel.

Unlike the 320,000* Arab refugees of 1948/49 – who have been sacrificed by the Palestinian Authority, the PLO and the Arab regimes on the altar of Israel’s de-legitimization – about 100 million refugees from Europe, Asia and Africa have been integrated into their host countries since the end of WW2.

According to testimony by General Alexander Galloway, the UNRWA Director in Jordan, at a May 25, 1953 hearing of the Near East Senate Subcommittee: “The Arab states do not want to solve the refugee problem. They want to keep it as a weapon against Israel. Arab leaders don’t give a damn whether the refugees live or die.”

Actually, Jordan was the only Arab country to accept the January 26, 1952 UN Resolution #413, which approved a 3-year-$200MN plan proposed by the UN Secretary General, Dag Hammerskjold, to integrate Palestinian refugees into their host Arab countries.  On January 3, 1950, UN Secretary General, Trygve Lie said: “The refugees will lead an independent life in the countries which shelter them…. The refugees will no longer be maintained by an international organization….”  However, as reported by the NY Post on June 11, 1959, Dr. Elfan Rees, an adviser on refugees to the World Council of Churches, contended that due to Arab deception and pressure, “the UN Relief and Work Agency (UNRWA) is feeding the dead and non-refugees.”

UNRWA was established on December 8, 1949 as a temporary, 2-3-year relief agency, but became permanent, the largest UN agency, overstaffed, featuring a $1 BN pension fund, and used as a dagger aimed at Israel. UNRWA deals only with Palestinian refugees, employing 30,000 people, compared with 6,400 people employed by the UN High Commissioner for Refugees (UNHCR), which deals with 60 million refugees. The UNHCR terminates refugees’ status, while UNRWA perpetuates and exacerbates refugees’ status and inflates their numbers.

In contrast to the UNHCR, which adheres to the 1951 UN Convention on Refugees – refugee status is not inherited by descendants – UNRWA applies refugee status in perpetuity, with no serious scrutiny, to Arabs (including foreign laborers) who were in Palestine for only two years before the 1948 war.  In 1978 and 1986, UNRWA aborted Israeli offers to co-fund the resettling and re-training Arab refugees in Gaza, Judea and Samaria.

In 2012, UNRWA employees elected candidates affiliated with Hamas terrorists to 25 out of 27 seats on a union board that represents ten thousand UNRWA workers.  Furthermore, UNRWAfacilities were used by Hamas in its 2014’s war against Israel.

Had Arab countries refrained from invading the newly-established Israel in 1948, and had Israeli Arabs refrained from collaborating with the invasion – which was driven by the Islamic doctrine that the entire Middle East was divinely and exclusively ordained to Muslims – there would not have been war in 1948-49 nor 820,000 Jewish refugees from Arab lands and 320,000 Arab refugees. Had the Arabs accepted Israeli offers to resettle and job-train Arab refugees, there would not be any refugee left.

In fact, the most authentic, rogue and sadistic nature of the Palestinian Authority and other Arab regimes – and a key obstacle to peaceful coexistence – is reflected by their hate-education and opposition to the resettling of Arab refugees. They are determined to sustain the campaign to delegitimize, dehumanize and eventually eradicate the “infidel” Jewish state.

In 135 CE, the Roman Empire renamed/misrepresented Judea as Palestina – a derivative of Phillistia/Phillistines, who were not Arabs, but an Aegian (Greek) Sea tribe – in an attempt to eradicate Judaism from human memory. In 2016, the saga of the 1948/49 Arab refugees is dramatically misrepresented, as a tool to eradicate the Jewish State.

Ambassador (Retired) Yoram Ettinger is an insider on US-Israel relations, Mideast politics and overseas investments in Israel’s high tech. He is a consultant to members of the Israeli Cabinet and Knesset, and regularly briefs US legislators and their staff. His OpEds have been published in Israel and the US he has been interviewed in both Australia and the U.S. A graduate of UCLA and undergraduate at UTEP, he served amongst other things, as Minister for Congressional Affairs at Israel’s Embassy in Washington. He is the editor of “Straight from the Jerusalem Cloakroom and Boardroom” newsletters on issues of national security and overseas investments in Israel’s high-tech.