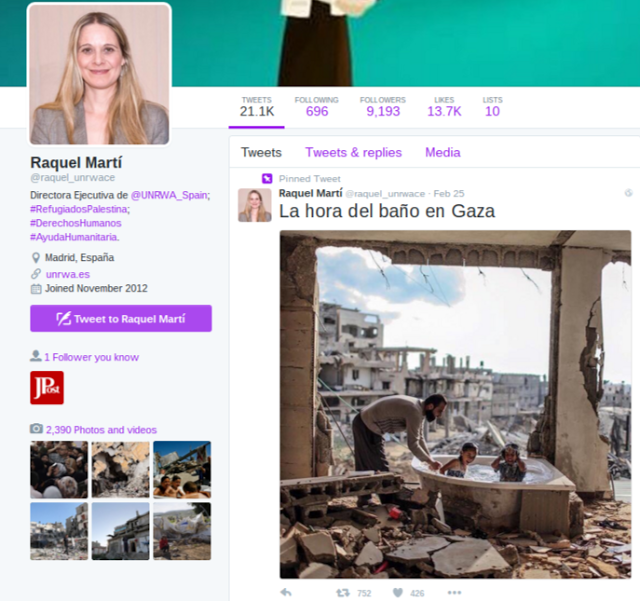 This is the pinned photo that has been on the top of the Twitter feed of Raquel Marti, UNRWA’s executive director in Spain, for months. She captioned it “Bath time in Gaza:”

The original photo was taken by Emad Nassar, with this description: 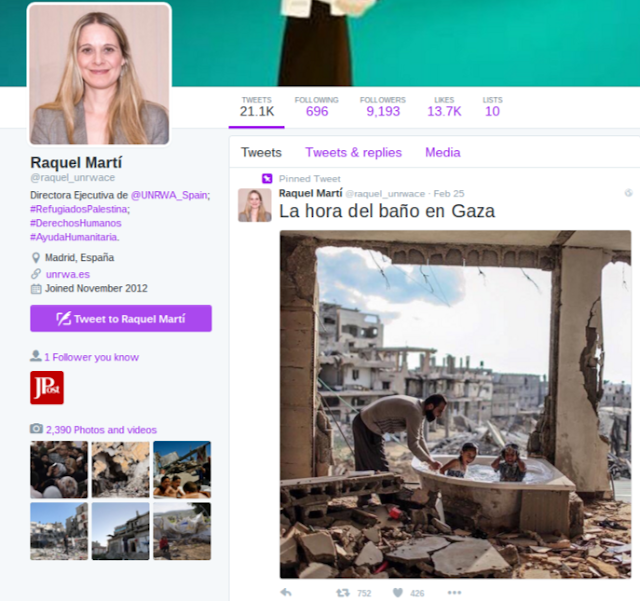 June 26, 2015 . Salem Saoody, 30, is getting his daughter Layan (L) and his niece Shaymaa 5 (R) in the only remaining piece from their damaged house, which is the bathing tub. They now live in a caravan near the rubble.

One minor question: Where did the water come from?

There is no rain in Gaza in June. The house does not appear to have running water. There is no hose visible in the picture.

What are the chances that Salem Saoody takes his daughters out of their mobile home and they carry over 100 liters of clean water with them to their former home to take a bath?

Emad Nassar saw the chance for a dramatic photo, so he staged it to win awards. And the girls were happy to play in a mini-pool on a summer day. So, it appears, Nassar and Saoody spent a morning carrying water to the old bathtub for the perfect photo.

The idea that the Saoodys are forced to give their girls a bath in their old bathtub does not pass any sanity test.

Last June, when this photo was taken, I noted that Hamas had turned the Shujaiyeh neighborhood into a showpiece to bring foreign reporters to show Israel’s evil – even though thousands of Gaza homes were being repaired, Hamas left Shujaiyeh untouched. There were a series of such obviously staged photos published by Hamas-leaning and duped photojournalists. And while the terror group kept the neighborhood as a zoo for gaping Westerners, it was building tunnelsunderneath the very same area.

UNRWA has something in common with Hamas. Both groups wanted to keep families in Shujaiyeh homeless, and the rubble uncleared, for as long as possible so they could maximize its propaganda value and get more funds from credulous Westerners. UNRWA actually made an entire film of such staged scenes in the neighborhood last year,

Of course, if you want to paint Gazans as eternal victims and implicitly blame Israel at every opportunity, this staged photo and inaccurate caption is perfect for you – and perfect for UNRWA and its lackeys. UNRWA created an entire film of such staged scenes in this neighborhood and told kids there to act in ludicrous scenes such as creating a makeshift see-saw in the middle of rubble.