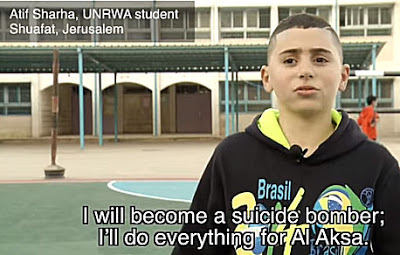 UNRWA was created almost seventy years ago and has evolved into the UN’s single largest arm, employing more than 30,000 staffers.

Ninety-nine percent of that incomprehensible total (we explain why in a moment) is made up of locally recruited Palestinian Arabs, says Wikipedia. A mind-numbing, ongoing flow of cash and diplomatic coddling ensures that UNRWA shows no signs of slowing down – or of achieving any of its stated goals.

relief of the Palestine refugees… to prevent conditions of starvation and distress among them and to further conditions of peace and stability, and that constructive measures should be undertaken at an early date with a view to the termination of international assistance for relief…

Palestine refugees are defined as “persons whose normal place of residence was Palestine during the period 1 June 1946 to 15 May 1948, and who lost both home and means of livelihood as a result of the 1948 conflict.” [UNRWA’s website]

Yes. If you had lived there for two years, you were entitled to UNRWA support (pensions, allowances, food, clothing, basic household items, schooling, psycho-social activities, health services, shelter, welfare services), and so are your children, and their great-great-great-great grandchildren until forever.

The UN incredibly defined Palestinian Arab refugee status as something you inherited… in perpetuity. How surprising is it to know the number of Palestinian Arab “refugees” has been exploding for decades? How could it not?

According to UNRWA’s published data:

In May 1951, UNRWA inherited a list of 950,000 persons from its predecessor agencies. In the first four months of operations, UNRWA reduced this list to 860,000 persons, based on painstaking census efforts and identification of fraudulent claims. The 1948 registered refugees and their descendants now number five million,

Having multiplied itself by a factor of nearly six in these 6+ decades of furthering “conditions of peace and stability” and of funding by others, does anyone imagine this number of beneficiaries is about to get smaller? Ever?

Yet on one perfectly reasonable view, UNRWA has succeeded. A large majority of those Palestinian Arab refugees live today in homes unconnected to refugee camps, reside in one of the two Palestinian Arab statelets – the one based in Ramallah, the other in Gaza – under Palestinian Arab control, or hold citizenship in various countries.

Needless to say, if you have been following the scandal down through the years, UNRWA and its fans don’t see this as success. Or as reality. They invest serious energy in endlessly reframing the catastrophe so that it’s about homeless, hopeless refugees, totally dependent on charity, driven by endless yearning for a lost homeland (the one that served many of them for 20 months), and always, but always, needing more cash.

Now let’s note that UNRWA is not the United Nations’ only refugee agency. UNHCR, the UN High Commissioner for Refugees, deals with all the world’s refugees except for those who come under the rubric of UNRWA. There are many times more refugees being helped by UNHCR than there are Palestinian Arabs being helped by UNRWA. Yet UNHCR, with by far the larger work load, has a staff that’s only about one third the size of UNRWA‘s:

At the end of 2015, we employed over 9,700 people. Around 89 per cent of our staff are based in the field. We work in 126 countries, with staff based in a mixture of regional and branch offices and sub and field offices. Our staff work hard to help the displaced, specializing in a wide range of disciplines, including legal protection, administration, community services, public affairs and health.[UNHCR Figures at a Glance]

And note this statistic: “UNHCR has one staff member for every 5,500 refugees and other persons of concern. UNRWA has one staff person for every 182 people registered by UNRWA.” [Source, March 2015]

So given that the UN operates two parallel but very separate refugee agencies with massively different per capita resource deployment (obviously favoring UNRWA), who pays for the Palestinian Arab one? The obscenely wealthy Arab oil potentates, perhaps? Or the Qataris who will host the 2022 FIFA World Cup and are spending, as The Guardian memorably reported half a year ago, $200,000,000,000 on soccer stadiums and other essentials?

We published a table of UNRWA’s main donors based on 2013 donations [source] a while back [“04-Jun-15: Exploding for decades: UNRWA needs more, more, more“] while explaining that its funding is perpetually in crisis. It listed the Top 20 contributors to UNRWA for that year, and showed that the Arab donors in the Top 20 contributed 16.1% of what the entire Top 20 gave.

And earlier still, the 2010 numbers [here] showed not a single Arab donor in the Top 20 list, and this after more than sixty years of UNRWA activity.

We have just taken a close look at the 2015 donations to UNRWA via an official UNRWA publication [online here]. The numbers are correct as of the last day of 2015. Some highlights:

Here is our list of UNRWA’s major enablers based on those December 2015 statistics:

The Arab donors contributed about 13.5% both on a Top 20 basis and on a whole-donor-list basis. That’s a significant decline, percentage-wise, over the 2013 numbers.

We think the video clip we showcased in another post of ours [“30-May-16: Listen to the children to understand who is weaponizing them and how [Video]“] just a few days ago gives a good sense of what UNRWA donors are getting for their donations – in business terms, their return on investment, or ROI. Though the video runs for less than ten minutes, it turns the turgid prose – and figures – above into very uncomfortable realities.

It also puts faces and voices to the hundreds of thousands of child-victims of the appalling UNRWA, a self-praised United Nations agency with a track-record of destroying lives, as we explained just last week here: “30-May-16: Barbarism, bigotry and blood-lust: What a UN-provided education delivers“. This is a humanitarian disaster that many prominent politicians and diplomats prefer we don’t comprehend or see.

To review some more of the awful things for which UNRWA stands and that keep on keeping us occupied, see

via This Ongoing War: A Blog http://ift.tt/1XtQkOa