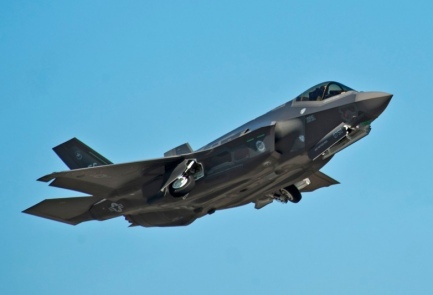 The Israeli Air Force will receive its first F-35 fighter jet on Wednesday — the first of 33 aircraft Israel has acquired — in a festive rollout ceremony to be held at the Lockheed Martin plant in Fort Worth, Texas. The aircraft is expected to arrive in Israel by the end of the year.

The F-35, or the Adir as it has been named in Hebrew, is a fifth generation stealth fighter jet that will position Israel’s air force at the cutting edge of technology. Questions regarding the aircraft’s capabilities have been raised but the Israeli Air Force is convinced that all the challenges facing its development have been nothing more than growing pains and that the aircraft is essential to Israel’s qualitative military superiority in the region.

Carter and Lieberman discussed regional security challenges in the Middle East and areas of mutual defense cooperation before Lieberman headed to Texas for the rollout ceremony.

Israel will be the first country outside the U.S. to receive the F-35.

Lieberman’s visit to the Pentagon came as the U.S. and Israel were in the process of negotiating a new 10-year defense aid agreement to replace the current one, which expires in 2018. Lieberman is interested in finalizing a deal with the U.S. before the next American president takes office in January.

It should be noted, however, that the main player in the talks with the Americans is Prime Minister Benjamin Netanyahu (via the National Security Council), not Lieberman.

In Israel, meanwhile, the air force will welcome four female graduates next week into its ranks of pilots, navigators and flight engineers following a grueling three-year training course.

Considering the fact that the course has only been open to women less than two decades, this year’s four graduates represent a relatively high number of women. The highest number of women graduated the course in 2011, totaling five. Forty-two women have completed the course since becoming eligible for it in the late 1990s, soon to be 46.

The air force has undertaken to increase the number of women in its ranks and has adapted the acceptance process into the training course to that end. The air force actively recruits women whose general profiles fit the course’s requirements rather than only passively accepting applications. The air force also holds recruitment conferences to raise awareness among women who are potential air crew members.