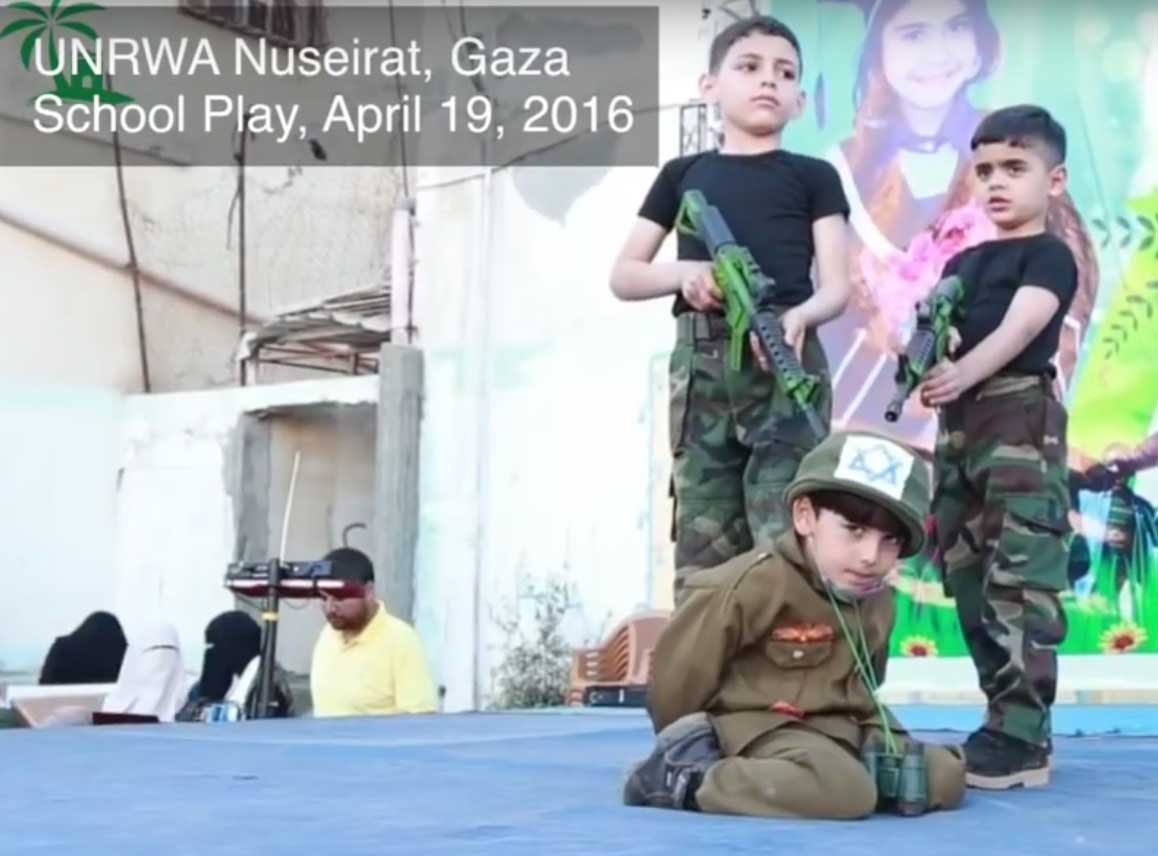 A newly released 10-minute online video produced by the Jerusalem-based Center for Near East Policy Research says that many of the Palestinians who have murdered Israelis during the so-called “stabbing intifada,” which began in September 2015, were educated in schools run by the United Nations Relief and Works Agency for Palestine Refugees in the Near East (UNRWA).

Titled “The UNRWA road to terror: Palestinian classroom incitement,” the video claims that the current wave of violence was not spontaneous, but rather has roots deriving “from an educational curriculum taught to Palestinians beginning in first grade.”

Thirty-eight Israelis and tourists have been murdered in the nine-month-long Palestinian terror wave, most recently the shooting at Tel Aviv’s Sarona market that killed four Israelis.

UNRWA’s curriculum, the video says, is focused on “jihad,” while UNRWA teachers glorify the so-called “right of return” of Palestinian refugees through war. The video reveals a military-themed school play held in April 2016 at the UNRWA Nuseirat School in Gaza, in which students hold an Israeli hostage at gunpoint and emerge from a tunnel in order to carry out an attack against Israelis—the latter scene mirroring the Hamas terror group’s efforts to attack the Jewish state through cross-border tunnels running underground from Gaza to Israel.

The footage begins by zooming in on classrooms of Palestinian children repeating phrases chanted by their teachers such as “Palestine is an Arab land from the river to the sea” and “We want Haifa, we want Acre,” with no recognition of a state called Israel.

The scene then shifts to numerous one-on-one interviews with Palestinian children in the courtyards of their schools in various Jerusalem neighborhoods and surrounding areas, in which they admit that they are taught in school that it is their destiny to violently “reclaim” the entire country they refer to only as “Palestine.”

One student from the Shuafat refugee camp says that his UNRWA educators “teach us in school that Jews are fickle, bad people.” He adds, “I am ready to stab a Jew and drive [a car] over them.” Another student from Shuafat says, “We have to constantly stab them, drive over them, and shoot them (the Jews).”

A child from Kalandia is filmed saying that he is taught about how “Zionists are our enemy, and [we] must fight them.” A different student at the same school says, “With Allah’s help I will fight for ISIS, the Islamic State.” Documentary filmmaker David Bedein, director of the Center of Near East Policy Research, says that the U.N. member states who are the funders of UNRWA schools should be held accountable for the agency’s hate education. Bedein says that at the top of that list of funders is the United States—UNRWA’s largest donor, providing $400 million of the organization’s annual $1.2 billion budget.

U.S. Rep. Doug Lamborn (R-Colo.) echoes Bedein, tellingFoxNews.com that an UNRWA education “does not in any way prepare the Palestinian population or future generations of Palestinians for peace with Israelis. It is unacceptable that the international community, including the United States, is funding UNRWA without demanding change.”

According to Bedein, about 100 Palestinian children studying in UNRWA schools were interviewed for the video. Those children, he tells JNS.org, “have been indoctrinated to believe that they have the right to kill Jews, because they took their land.”

He adds that the children “learn that in all of the villages that their great-grandparents lost in 1948, that it’s kosher to walk into any place that used to be one of those villages whether Tel Aviv or Jerusalem and kill the people who live there.”

Asked why the Israeli Ministry of Education doesn’t get involved in stopping UNWRA’s incitement, Bedein says the ministry’s hands are tied and that it can’t interfere with UNRWA schools. He says that Israel’s Defense Ministry and Foreign Ministry, however, “could have a say in it but choose not to.”

Bedein explains that the philosophy of the Israeli government “is that the U.N. schools give an opportunity to have peace education as an alternative to Hamas or terrorist education. However, the reality is that UNRWA is operating in a way that it’s providing worse incitement than the Palestinian Authority incitement or Hamas incitement. It’s a level of cognitive dissonance, and people don’t want to hear what they don’t want to hear.”

It is highly disturbing, says Bedein, that the students interviewed in the video weren’t living in Gaza under Hamas rule, but rather in or near Israel’s capital of Jerusalem.

“It’s literally a 10-minute ride from Mount Scopus in Jerusalem to the Shuafat refugee camp run by UNRWA, where this incitement is taking place,” he says.

The new video has started to gain traction on social media. The Israel education organization StandWithUs recently shared the video with its 970,000 followers on Facebook.

“The teaching of racism and religious supremacism in UNRWA schools plays a major role in the violence Palestinian terrorists are inflicting on innocent Israelis,” StandWithUs CEO Roz Rothstein tells JNS.org. “This incitement of Palestinian children hurts Israelis and Palestinians alike, and must be stopped for there to be lasting peace.”

When asked to comment on the video and on America’s annual $400 million support of UNRWA, a press attaché at the U.S. Consulate in Jerusalem declined comment and instead referred JNS.org to UNRWA. In an emailed response to JNS.org, UNRWA spokesperson Christopher Gunness denied the film’s accusations and questioned its standards.

Gunness says that the “generalized allegation made in the film that many Palestinian children who murdered Jews came from UNRWA schools is completely unsubstantiated in the film, which produces no evidence to prove this.”

According to Gunness, “In this latest, he (Bedein) takes non-UNRWA facilities and falsely claims they belong to UNRWA. He shows teachers claiming they are UNRWA teachers when in fact they are not and he plays the same tricks with students, often misrepresenting what they say in translations.”

“As a neutral U.N. humanitarian agency, UNRWA is committed to promoting non-violence and the highest standards of neutrality,” adds Gunness. “Our condemnation of all forms of racism, including anti-Semitism, is a matter of public record.”

In response to Gunness, Bedein—who says he has been monitoring UNRWA’s activities for 28 years—maintains that his research on UNRWA in the latest video and past videos is authentic, and that the videos “should be cause for this humanitarian organization (UNRWA) to carry out a self-introspection.”

“Instead of denying [the new video’s] validity,” says Bedein, “UNRWA should bring it to the attention of donor nations that they are funding war curriculum education within a U.N. organization, so that the situation can be rectified.”

Bedein says that his institution’s next project will be to translate all of the latest Palestinian Authority textbooks from Arabic into English, to prove that “despite the fact the U.S. government issued a statement that [the books] have been evaluated and teach ‘peace,’ we have seen the books, and that’s not the case.”