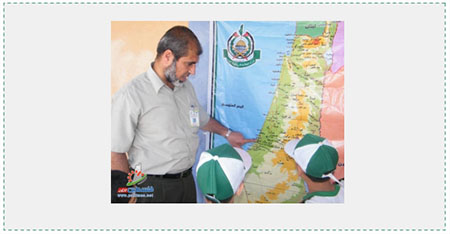 1.   On June 28, 2016, the UN secretary general went to the Gaza Strip for a visit lasting several hours. While there he was taken to a number of places, including UNRWA’s al-Zeitun school in the Tel al-Hawa neighborhood of Gaza City.

2.   During his visit a giant wall map of “Palestine,” which completely ignored the existence of the State of Israel was, was covered. That was apparently done to keep from embarrassing him and UNRWA. However, there was nothing unusual about the map itself, because many such maps can be found throughout the Gaza Strip, Judea and Samariain administration buildings, schools, textbooks and in the media.[1] The maps ignore the existence of the State of Israel, and many major Israeli cities do not appear.[2] “Educating” the younger generation with maps: A counsellor in a Hamas summer camp in the Gaza Strip points to a map of “Palestine” issued by Hamas which ignores the existence of the State of Israel (Filastin al-A’an, June 8, 2016). Important Israeli cities do not appear on the map. Jaffa, considered a “Palestinian city,” replaces Tel Aviv, and Um-Khaled, an Arab village which no longer exists, replaces Netanya.

4.    For reactions to the covering of the map, see the Appendix.