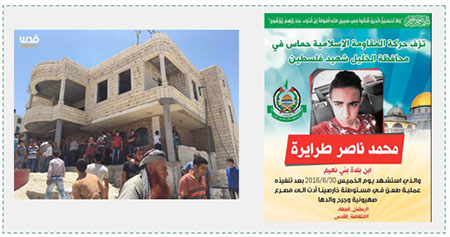 1.   In the early morning hours of June 30, 2016, a Palestinian terrorist climbed over the security fence around the Givat Harsina neighborhood in Kiryat Arba. He advanced about 150 meters (about 165 yards) to a house on the outskirts of the neighborhood, entered the bedroom Hallel Yaffa Ariel, a 13 year-old girl, and stabbed her to death in her sleep. The Kiryat Arba rapid response squad broke into the house. The murderer stabbed one of the squad members in the face, seriously wounding him. The murderer was shot and killed. Left: Residents of Bani Na’im gather at the house of Muhammad Tarayrah before IDF forces arrive (Facebook page of QudsN, June 30, 2016). Right: The death notice issued by the Hamas movement in Hebron for the death of Muhammad Tarayrah, a “shaheed of Palestine” from the village of Bani Na’im (Facebook page of the Hamas movement in Hebron, July 1, 2016).

3.   An examination of the Facebook account of Muhammad Tarayrah (which was closed a short time after the attack) indicated that in March 2016 he began writing posts about his feelings of pain and loss after his cousin’s death, and hung posters in his room commemorating the cousin. He was also influenced by the death of Majd al-Khudour, a young Palestinian woman who carried out a vehicular attack at the entrance to Kiryat Arba on June 24, 2016.[2] Five days before he murdered Hallel Yaffa Ariel he posted to his Facebook page that “Death is a right, and I demand my right.”

4.   His Facebook page served Muhammad Tarayrah as a platform for expressing his feelings and innermost thoughts. Although he dropped out of school, he was articulate and even wrote poetry. He was very active on Facebook late at night (possibly because of his work at the bakery).  For example, he answered the post of a friend at 4:37 a.m. An examination of his friend groups indicates he was also interested in issues characteristic of young people his age, such as entertainment and clothes.

5.   An examination of his Facebook page during the months before he carried out the murder shows the following:

a.   Identification with his cousin and the young woman from his village who were killed while carrying out terrorist attacks, and glorified them and their actions: After March 2016, when his cousin Yusef Walid Mustafa Tarayrah was killed while carrying out a vehicular attack, the nature of his Facebook postings changed. He began expressing feelings of pain and loss, and called his cousin “the heroic shaheed.” Relatives said he also hung posters in his room commemorating his cousin. Later on he was also influenced by the death of Majd al-Khudour, also from Bani Na’im, killed while carrying out a vehicular attack, whom he referred to as his “heroine sister.” He wrote poems for the two and praise for their actions, and posted them to his Facebook page.

b.   The desire to become a shaheed and enter Palestinian history: Beginning in March 2016, he often mentioned his desire to sacrifice himself and become a shaheed. More than once he stated his intention to follow in the footsteps of his cousin and Majd al-Khudour. On several occasions he called on others to follow the same path in order “to enter [Palestinian] history.”

c.   Motivation and political tendencies: His basic motivation was apparentlyPalestinian nationalism. He was critical of Mahmoud Abbas because of his so-called “attitude” towards Jerusalem and expressed his longing for Arafat. While Hamas rushed to issue a death notice for him, there was no mention on his Facebook page of solidarity or affiliation with Hamas or any other terrorist organization.

d.   There were no signs of religious piety: His profile picture shows him with his hair cut in the style currently adopted by secular boys his age. His correspondence with Facebook friends was similar to that of others his age. He surfed entertainment and clothing on the Al-Quds University website and was interested in news sites. However, like the Palestinian terrorists who preceded him, sometimes he used Islamist terminology and posted Qur’an quotations to his page, especially thoserelating to death, shaheeds and reaching paradise.