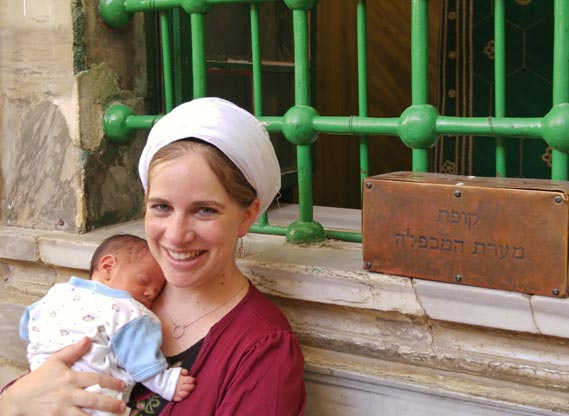 This past week, Leora Bastiker, daughter of David and Sara Bedein gave birth to a boy, her first  child. (the fifth grandchild for David and Sara)

The Brit covenant circumcision cerermony – which welcomed the little fellow into the Jewish people – was  held at the Cave of the Patriarchs in Hebron.

At the Brit, Leora & her husband Avichai gave their  first born  son the name of Avraham, who scioned the Hebrew nation and fought for justice on behalf of all peoples.

The name Avraham reminds everyone that the first piece of land that Avraham bought in the land of Israel was the Cave of the Patriarchs, which he purchased initially as the burial plot  for Avraham’s wife Sara, as described in Genesis 23.   This became the burial place for Avraham, Isaac , Jacob and their wives- Sara, Rivka and Leah

Backgrounder: The Jewish Community of Hebron and its Renewal

The name also reminds us of Avichai ‘s  grandfather Avraham, from Bombai , India, and who was murdered by a  Moslems , shortly before Avichai’s father, Rahamim, arrived in Israel as a child, courtesy of the Jewish Agency, in 1962.

Grandpa Abe, a veteran of World War I, served as the commander of the  American Legion in Long Island, New York in the 1930’s, where he led a lonely fight  to close down the American Nazi presence in the US.

The German American Bund was located near the home of Abe and Rose Levy in Lynnbrook, New York.  He  was ahead of his time when he fought against the Bund,  which retaliated in a counter attack  to discredit Abe Levy’s good name.

David Bedein often says that he inherited the tenacity to fight against all odds from what he learned from his grandfather’s passion to fight the Nazis in New York, long before they murdered six million Jews.