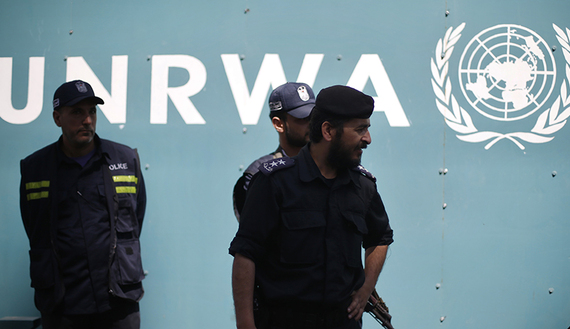 Over the past few weeks, reports have reached Israel that the new Canadian government is planning to renew its support for the United Nations Relief and Works Agency. The UNRWA helps Palestinian refugees throughout the Middle East, with special emphasis on those in the refugee camps of the West Bank and Gaza Strip. Under Prime Minister Stephen Harper, who was particularly supportive of Israel, the Canadians suspended their support for UNRWA. Jerusalem has now learned that Canada is about to restore its financial aid to the UN agency, if cautiously, by helping to fund special projects rather than providing regular support for the organization at large.

Former Finance Minister Yair Lapid, the chairman of Yesh Atid, was exasperated by the news. The man considered the strongest candidate to one day succeed Prime Minister Benjamin Netanyahu has been waging an all-out war against UNRWA and various other international aid organizations and institutions. He calls UNRWA anti-Semitic and says that it has been causing profound damage to Israel.

“Its staff,” Lapid told Al-Monitor in an interview, “includes quite a few members of Hamas, and its schools and preschools are being used to hide Qassam rockets and mortars. Worst of all,” he continues, “it manufactures refugees, thereby making a decisive contribution to perpetuating the Palestinian refugee phenomenon.”

Lapid has decided to fight the move, and is now trying to persuade the Canadians not to change their policy. He placed a few calls to prominent Jewish Canadian leaders and asked them to pressure their representatives in the parliament and the government, but when they got back to him a few days later, they had some surprising news. They had started sending out feelers, but were told that the Canadian government had already consulted with the Israeli Embassy and the ambassador himself, speaking for Jerusalem, informed them that the Israeli government does not oppose support for UNRWA. In fact, the opposite may be true.

Al-Monitor investigated the story, which was confirmed by senior Foreign Ministry officials. Spokesperson Emmanuel Nachshon told Al-Monitor, “It’s true. Israel is working with UNRWA and does not oppose contributions to the organization from donor nations.”

Lapid was furious to learn that he was practically the only figure in the Israeli political establishment to oppose support for UNRWA. “It’s preposterous!” he told Al-Monitor. “It is because of UNRWA that the Palestinians are the only people in the world for whom refugee status can be inherited. In the past, Israel officially tried to combat UNRWA and even had a few successes. Now it turns out that we are actually supporting UNRWA instead.”

Hiding beneath this specific argument is a much broader debate over principles. In this particular issue, Lapid represents a minority opinion. Almost all official Israeli sources, including the political leadership itself led by Netanyahu and Defense Minister Avigdor Liberman, grit their teeth and work with UNRWA, simply because Israel has no other choice. Lapid is almost alone on the other side. There is, however, one other person with him there: former Knesset member Einat Wilf, who is currently working on a book about UNRWA. In the past, Wilf called for Israel to “call UNRWA’s bluff.” In this particular case, Lapid, who is normally positioned to the left of Netanyahu’s far right government, finds himself outflanking the government from the opposite direction.

“It’s a complicated issue,” said a high-ranking officer in the IDF’s Office of the Coordinator of Government Activities in the Territories. Talking on condition of anonymity, he told Al-Monitor, “We are working with UNRWA, which takes care of hundreds of thousands of refugees, feeds about half of the Palestinian population in Gaza and tends to the welfare and education of its children.” He added that UNRWA has cooperated with Israel and coordinates all of its operations with the Coordinator of Government Activities in the Territories.

“The alternative is much worse,” said the IDF source. “UNRWA is one of the few addresses we can turn to in the Gaza Strip.” This resource helps Israel turn a blind eye and overlook the fact that most UNRWA employees are affiliated with Hamas. It allows the government to ignore the instances in which Hamas used UNRWA facilities to fire rockets and mortars or to store weapons.

During Operation Protective Edge, three IDF soldier were killed when a booby-trapped UNRWA clinic exploded. “The UNRWA staff tries to make sure that things like that don’t happen,” one senior Israeli political figure told Al-Monitor on condition of anonymity. “We receive a report whenever attempts are made to exploit UNRWA for terrorist purposes. There is progress in everything to do with the curricula taught in UNRWA schools, too,” the source added. “UNRWA is one of the main reasons there is no humanitarian crisis in Gaza, why most of the children aren’t roaming the streets, why no epidemics have erupted and why people continue to function on a reasonable level. Israel has no interest in disrupting this sensitive situation.”

Yair Lapid is unconvinced. “I have no problem with education or granting humanitarian assistance to the people of Gaza,” he told Al-Monitor. “I support the construction of a seaport in Gaza, just as I did when I was in the cabinet. The problem is that the international community will not even set minimal requirements for how its money may be used. They simply shove money at UN organizations without any supervision whatsoever and these organizations that have undergone a hostile takeover by the Palestinians. Officially, Israel chooses to ignore the implications of this in favor of easy solutions. The same thing happened after Operation Protective Edge. We allowed the donor committee to approve billions of dollars to rehabilitate Gaza without setting a single precondition, such as demilitarization. Less than a billion dollars reached Gaza in the end, but even then, a sizable portion of that money went to support rebuilding the military and terrorism.”

Lapid said that Israel should join the game and start pressuring groups like UNRWA to return to “the straight and narrow path.” He went on, “Making the money they get conditional on appropriate behavior could change the entire picture. As for the Canadian issue — and American support, too — I have been in regular contact with American and Canadian legislators. I spoke with quite a few European ambassadors, too. Before we restore financial support to UNRWA, it is only fitting that we demand that closed-circuit cameras be installed in clinics and schools to prevent Hamas weapons from being brought in. It also behooves us to demand that incendiary and anti-Semitic materials be removed from textbooks. These demands are completely reasonable. The problem is that no one is raising these demands at all. We’re simply not on the playing field.”