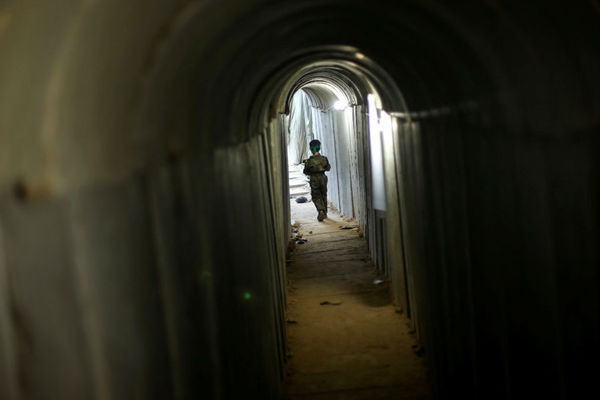 For parents choosing a summer camp in the Gaza Strip, the diversity of options is on par with the most posh American suburb – though the menu of activities is decidedly different.

For religious folks aligned with Hamas, there’s the “Pioneers of Liberation” camp for teens, where your son can learn how to shoot a Kalashnikov and dive into a tunnel. For those with means, there’s horseback riding and swimming, at $100 a week. And for the many struggling to make ends meet, there’s the cost free UNRWA camps, with slides and trampolines.

The camps tell a lot about the diverse mentalities in Gaza, and the future of these children. Young people under the age of 18 make up more than 50 percent of Gaza’s population, compared to 24 percent in the United States. That gives young Palestinians here an outsized role in shaping the future of this tiny coastal territory. So far, all they have known is perpetual conflict between Gaza’s armed factions and Israel next door.

Hamas, for one, is eager to impress upon these young people the importance of keeping up Palestinian resistance to win their freedom and their land from Jewish state, which has engaged in three devastating wars with Hamas since 2008. Israel and the US, which characterize Hamas as a terrorist organization, have blamed Palestinian incitement among schoolchildren for perpetuating the conflict.

On a recent summer day, hundreds of children gather in a very hot open area, as dozens more stream in from buses that have come from all over Gaza. Hamas’s green flags are flapping everywhere over their heads, as well as pictures of senior Hamas leaders killed. Wide smiles spread over the faces of the boys with black uniforms rushing to the camp. This is Hamas’s “Pioneers of Liberation’’ summer camp for teenagers.

“I’m very excited, I love military trainings so much,” says one young teen, running alone to get to training. He came all the way from Jabalya, a half-hour walk away, to be a part of the program. “My parents are Hamas-affiliated and they encouraged me to enroll at the camp.”

When a reporter from The Christian Science Monitor tried to enter the camp, trainers using megaphones asked her to leave immediately.

The camps are run by the Al-Qassam Brigades, the armed wing of Hamas, which has ruled Gaza since violently ousting its secular rival Fatah in 2007. Thousands of boys and young men, from 15 to 21 years old, signed up at mosques and military camps and attended one-week training camps across the Gaza Strip.

Their experience was far different than that of Salwa and Yafa, who were among dozens of girls playing on slides and trampolines at an UNRWA school in the southern Gaza Strip.

Salwa says she’s here because her teacher invited her – and her father, who works at an electric machines shop, can’t afford a paid camp. And he’s better off than many. In Gaza, the unemployment rate stands at 43 percent, the highest in the world according to the World Bank, which puts Gaza’s youth unemployment at 60 percent.

Her friend Yafa says she is very happy with the activities they do at the camp such as painting and dabkeh, a traditional Palestinian dance. “I could go to any other camp but I chose this one because I always participate at the UNRWA camp and find [the activities] interesting.”

Aside from the military camps and UNRWA free camps, Gaza also has many prestigious camps run by private organizations and schools, such as the Career Institute’s summer camp. The institute, which is located in Gaza City’s French neighborhood, specializes in language and business courses for adults, yet it holds many summer camps each year.

Siham Yaaqoub, the head of the institute, says that she invests a lot of time and thought into the summer camps at her institute so she can offer a different camp with high quality. “We once chose learning etiquette as a theme, running a business as another theme; we take care to keep the children up-to-date with the rest of the world’s children.’’

The fee for Ms. Yaaqoub’s camp is $100 per child, an amount that seems high according to the hard economic situation in Gaza. Yet she says it’s not a large amount according to the income of children who attend the camps she organizes indoors and outdoors.

At one of the classes, couple of boys and girls were chanting and clapping happily along with their supervisor. Among them was Juman Shaat, 12, who says she has been attending this summer camp for six years now and she is not planning to change it until she grows old.

“I love it here, I love all the original activities, I ride horses, I go swimming,” says Juman, as she assists in leading the group. “This is exactly how I want to spend summer.”