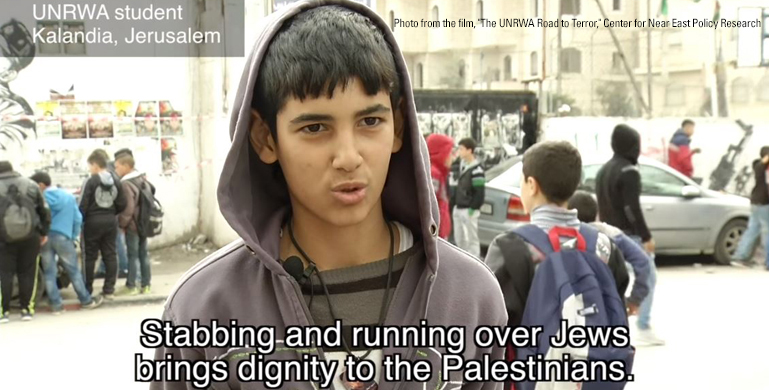 The United Nations Relief and Works Agency (UNRWA) teaches over 500,000 students that Arabs own all of Palestine—and Israel must be destroyed. UNRWA schools also extol the glory of Islamic jihad and suicide martyrdom and have served as launch pads for Hamas missiles. Moreover, UNRWA perpetuates a welfare state for five million faux “refugees.”

What are the facts?

“Right now I am prepared to be a suicide bomber,” says a 13-year-old Palestinian boy at a school run by the United Nations Relief and Works Agency. Another UNRWA student says, “They teach us that Jews are fickle, bad people. I am ready to stab a Jew and drive [a car] over them.”

Despite UNRWA’s slogan—“Peace Starts Here”—in reality the organization promotes Islamist jihad, terrorism and hatred of Jews. UNRWA, founded in 1949 to aid 750,000 Palestinian refugees displaced during the Arab war opposing Jewish independence in 1948, has instead served to perpetuate and extend refugee status today to some five million people in Gaza, Judea and Samaria (the “West Bank”), Syria, Lebanon and Jordan. Many of its 30,000 mostly Palestinian employees are members of the internationally designated terror group Hamas.

Despite UNRWA’s slogan—“Peace Starts Here”—in reality the organization promotes Islamist jihad, terrorism and hatred of Jews. UNRWA, founded in 1949 to aid 750,000 Palestinian refugees displaced during the Arab war opposing Jewish independence in 1948, has instead served to perpetuate and extend refugee status today to some five million people in Gaza, Judea and Samaria (the “West Bank”), Syria, Lebanon and Jordan. Many of its 30,000 mostly Palestinian employees are members of the internationally designated terror group Hamas.

How UNRWA schools support hate. A film, “The UNRWA Road to Terror: Palestinian Classroom Incitement,” shows a Palestinian teacher leading her class in chanting “Palestine is an Arab land from the river to the sea!” and teaching children that Jews are “wolves.” Maps of Palestine in UNRWA schools show no state of Israel. Another UNRWA teacher assures her students that by waging holy jihad “we will return to our villages with power and honor.” Indeed, the curriculum at UNRWA schools repeatedly rejects Israel’s right to exist, portrays Jews as sub-human, casts Palestinian terror as an Islamic duty, and characterizes Israel’s founding not as an act of self-determination by the region’s indigenous Jewish people, but as Western colonialism imposed by foreign interlopers. Condemning this indoctrination, U.S. Representative Doug Lamborn of Colorado said, “It is a crime against humanity, an outrage, and does not in any way prepare the . . . Palestinians for peace.”

How UNRWA supports terrorist jihad. U.N. investigators have found rockets stored in three UNRWA schools, as well as proof that Hamas and/or Islamic Jihad rockets were fired at Israeli civilians from UNRWA’s Nuseirat Preparatory school during the 2014 Gaza war. In addition, more than 100,000 students attend UNRWA summer camps, where young campers are taught that their “right of return” to Israel is “holy,” to be won through Islamic jihad. In short, UNRWA teaches children that the conflict with Israel is not strictly a struggle for land, but rather is a religious war against Jews, promising exalted martyrdom to those who die in its cause. Little surprise that recent Palestinian suicide knife, gun and car attacks against Israelis were committed by former UNRWA students and campers.

How UNRWA promotes perpetual refugees. Of the 750,000 Palestinian refugees who either fled or were removed from Israel during its 1948 war against Arab armies from Syria, Jordan, Iraq and Egypt, only approximately 40,000 are still alive. However, in a breach of all international convention, UNRWA also categorizes an additional five million of their multigenerational descendants as refugees. Using such arithmetic, the Palestinian refugee population will eventually top ten million and more, without end. Nonetheless UNRWA provides services to all these “refugees” in camps around the Middle East, promoting the myth of their right to “return” to present-day Israel, a land almost none has ever seen, and most all of whom have stable residence in other countries, including the U.S.

Should American taxpayers support UNRWA? International donors currently fund UNRWA with some $1.2 billion annually, of which the U.S. supplies about one third. Given UNRWA’s aid to the ongoing terrorist war against Israel, as well as the agency’s promotion of an ever-expanding refugee entitlement program—rather than assisting refugees to resettle—U.S. Congressional committees are currently drafting legislation demanding that the State Department justify such enormous expenditures. Florida Representative Ileana Ros-Lehtinen said, “The U.S. can’t continue to send $400 million to UNRWA while ignoring the . . . anti-Semitic bias and incitement to violence we see from its employees.”

U.S. taxpayers have spent more than $4 billion supporting UNRWA, an agency that promotes Islamic jihad against our ally Israel, plus a self-perpetuating and degrading welfare system for five million would-be refugees. Congress should immediately cut support to this organization, which fervently opposes U.S. interests.