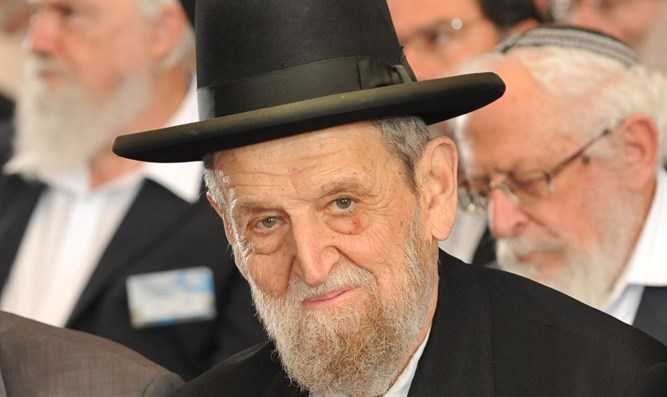 The death of the Chief Rabbi of Haifa, Rabbi She’ar-Yashuv Cohen, brings to mind the most stirring episodes of the history of the modern state of Israel.

Yet there was yet another mission of this Rabbi to Jerusalem which went little reported.

In August, 2005, Rabbi She’ar-Yashuv Cohen traveled to Jerusalem to make a last minute plea with Prime Minister Ariel Sharon to reconsider his plan to retreat from Gush Katif, which involved Israel’s obliteration of the 21 Jewish communities , including 325 thriving Jewish farms and 86 synagogues and Jewish study centers. Rav She’ar-Yashuv Cohen told me at the time that the chemistry remained between him and Sharon had lasted since his days of captivity after the 1948 war and that Rav She’ar-Yashuv was the only Rabbi whom was ready to speak with him at the time.

Sharon gave a clear answer to Rabbi Cohen: “This is what the US is demanding that I do and I must do it.”

It does not matter that half of the 9,000 Jews who lived in Gush Katif had nowhere to go, and that their relocation plans still left up in the air.

It did  not matter that the Israeli government could not offer more than two containers to each family to help them remove their possessions.

It did not seem to matter that the experts in Israel’s security establishment correctly  warned that the result of Israel’s  retreat will be the creation of a lethal Islamic terror base.

Rav She’ar-Yashuv Cohen heard Sharon make it clear that the pressure was from the US government and that is that. The myth of an autonomous Israeli policy in this regard had nothing to do with reality.

Indeed, one of the common assumptions until this day  was  that the Sharon government’s plan to expel Jews from Gaza and northern Samaria, and unilaterally hand the area over to an independent Palestinian entity, had been an entirely autonomous Israeli decision.

US government was behind it all along.

In meetings with concerned American citizens, Danny Ayalon, Israeli ambassador to the US at the time, clearly stated that Sharon’s Retreat Plan was  part of an overall Israeli-American agreement.

In late June, 2005, Ayalon met with representatives of the Orthodox Union, one of the largest contingents of American Orthodox Jews, and told them clearly that “Prime Minister Sharon is left with no choice. He is doing exactly what the US expects him to do.”

In an interview with the Jewish Journal of Greater Los Angeles, published on June 22nd, 2005, Ayalon reversed earlier Israeli government statements, saying that Israel does not expect the Palestinian Authority (PA) to dismantle terrorist infrastructure until after the planned expulsion. He mentioned that ending terrorism and anti-Israel incitement had been conditions Israel had demanded from the PA before carrying out the plan.

In the final interview given by Benyamin Netanyahu before his resignation from the Sharon government, to the Jerusalem Post on August 5th, 2005, he indicated that the current policy pursued by the government of Israel should be perceived as a threat to the security interests of the US and of all Western countries, since it created a terror base in Gaza, and since the Palestinian Authority incorporated the Hamas and other Palestinian terrorist organizations instead of dismantling them.

Yet the dictate of the US State Department remained undaunted: Prime Minister Ariel Sharon had to must dismantle and withdraw every Jewish community in the Katif district of Gaza by mid-August, 2005.

When Israel did go ahead with the retreat of the  IDF and the expulsion of the Jewish communities from Katif and the Northern Shomron,  Rav She’ar-Yashuv Cohen told me that he wanted to tell the world that this policy was implemented  as a the result of this clear US government directive to Sharon. This was not meant as a rationalization for Sharon’s policy.

Few people want to hear the warnings of Rav She’ar-Yashuv Cohen that Israeli policy is often dictated from Washington.