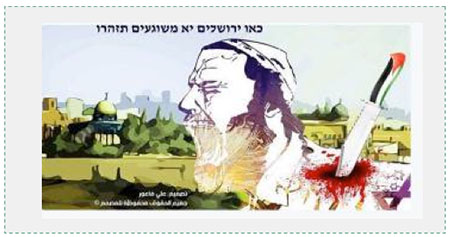 1.   The 7th Fatah Movement conference held in Ramallah between November 29 and December 4, 2016 dealt mostly with internal Palestinian issues, with the struggle for Mahmoud Abbas’ successor in the background. It also discussed strategies for dealing with Israel on the ground and in the international arena. The speeches given by Mahmoud Abbas and statements made by senior Fatah figures indicated the conference’s decision to strengthen the concept of “popular resistance”(decided on at the 6th Fatah Movement conference in August 2009). The concept “popular resistance” is represented as legal, unarmed and peaceful. However, developments on the ground since the 6th conference indicate that behind the term “peaceful popular resistance” hides support given by Mahmoud Abbas, Fatah and the Palestinian Authority (PA) to popular terrorism, which again erupted violently in September 2015 and has since also entered Israeli territory.

2.   What is the nature of the “popular resistance” adopted by the 6th Fatah Movement conference and again confirmed by the 7th conference?

a.       The so-called “popular resistance”has been the main course of Palestinian action on the ground since 2009. It is combined with the political, economic, propaganda and legal campaign waged against Israel by the PA. As far as Fatah and the PA are concerned, the “popular resistance” creates constant monitored, controlled tension between Israel and the Palestinians, used to exert pressure on Israelto the degree considered appropriate for the needs of the PA’s political campaign against Israel. In the internal Palestinian arena, however, the PA and Fatah use the “popular resistance” as an acceptable alternative to Hamas’ concept of “armed struggle,” which the PA and Fatah do not regard as useful at the present stage of the Palestinians’ anti-Israeli struggle (although Fatah does not reject it in principle).

b.       The “popular resistance” is not a non-violent quiet protest, as claimed by the Mahmoud Abbas and the PA.[1] It makes massive use of violence, especially the throwing of stones and Molotov cocktails, as well as stabbing and vehicular attacks. The use of cold weapons against Israeli security forces and civilians has been the major form of anti-Israel violence in Judea and Samaria, but occasionally there are military-type attacks involving firearms (attacks which the PA also does not condemn). During the past year the “popular resistance,” which Israel refers to as popular terrorism, has caused the deaths of dozens of Israeli civilians and members of the Israeli security forces.[2]

c.       The PA and Fatah publicly support attacks carried out as part of the “popular resistance” and do not consider them terrorism. They actively legitimize and aid Palestinians who carry them out by providing them with financial and media support(as well as providing aid for Palestinian prisoners held in Israeli jails and the families of martyrs). In the international arena as well, the PA fully legitimizes the “popular resistance,” attempting to blur and minimize its extensive use of violence. The PA does not consider “popular resistance” attacks, even the most deadly, as terrorism, a term is reserves for Israel and the settlers. Speaking at the 7th Fatah Movement conference, Mahmoud Abbas rejected terrorism “regardless of motive or source,” including state terrorism (i.e., so-called “Israeli terrorism”) and that of the Israeli settlers, claiming that “We adhere to a culture of peace and tolerance” (Palestinian TV, November 29, 2016). Fatah notice calling on Palestinians to stab Israelis in Jerusalem (Twitter account of Fatah’s office for recruitment and organization, October 4, 2015) The PA holds a military-type governmental funeral for Palestinian terrorist Ibrahim Samir Ibrahim Sakafi, 22, who carried out a vehicular attack near Halhul. His body is carried on the shoulders of operatives of the Palestinian national security forces (Wafa, November 5, 2013).

3.   On the other hand, the PA objects to the use of firearms and to turning the “popular resistance” into a military-type intifada against Israel, as advocated by Hamas. The PA and its security forces enforce that positionon Hamasand the other terrorist organizations with ongoing preventive activities and security cooperation with the Israeli security forces(despite harsh criticism from Hamas). In principle, however, Fatah does not rule out the concept of “armed struggle.” According to the platform of the 6th Fatah conference in August 2009, the concept of “armed struggle” remains a possible future option, to be put into practice when the political and societal conditions of the conflict with Israel make it necessary. That can be seen in Fatah and the PA’s preservation of the legacy and symbols of the “armed struggle” against Israel by commemorating shaheeds (of all the terrorist organizations) killed while carrying out terrorist attacks against Israel.

Preserving the Legacy of the Armed Struggle Left: Dedicating the Dalal al-Magribi square in al-Bireh. Al-Magribi was a member of the Fatah terrorist squad that carried out the massacre on the Coastal Road between Tel Aviv and Haifa in March 1978 (35 murdered, 13 of them children, and 71 wounded). After her death she won great admiration and became a role model for Palestinians. Holding the banner in the center and wearing a white suit is Tawfiq al-Tirawi, a senior Fatah figure (al-Quds, March 11, 2010). Right: The sign on Yahya Ayyash street in Ramallah (Photo courtesy of Israel Channel 10 TV, April 7, 2010). Yahya Ayyash, aka “the engineer,” was a senior Hamas terrorist operative who was responsible for a series of deadly suicide bombing attacks throughout Israel whose objective was to sabotage the Oslo Accords. The Palestinian presidential building lies on the street named for him.

4.   In the wake of the 7th Fatah Movement conference Mahmoud Abbas, the PA and Fatah can be expected to continue their support of violence carried out as part of the “popular resistance.”They will continue to providefinancial support and media backup for the Palestinians who carry out popular terrorism attacks, while avowedly objecting to the military-type terrorism favored by Hamas. At the same time, in the international arena the PA will blur and minimize its support for violence and terrorism, and continue to spout deceptive slogans about its “peaceful popular resistance” against Israel.

a. Statements by Mahmoud Abbas and senior Fatah figures during and after the 7thFatah Movement conference regarding the “popular resistance”

b. Adopting the concept of “popular resistance” at the 6th Fatah Movement conference and its implementation during the past seven years.