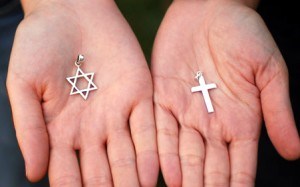 Israel as a country can never be properly understood without context in both historical and geographical Judaism.

Judaism, however, is normally seen only in its historical context as one of the three monotheisms of Western civilisation.

The most heard reference is the phrase, “Judeo-Christian values”.

This description invokes the ethics of Scripture yet also feeds into the view of Humanism that declares that now we have the values, religion is no longer needed.

These less heard phrases better encapsulate the fact that both Jewish and Christian activity and influences contributed in many ways other than simply with ethical values to developments, both religious and secular, in the Western world, down the centuries.

There is, however, a curious geographical fact, the significance of which needs to be appreciated. The two other monotheisms now exist in vast land areas with vast populations while Judaism has had not one square inch of land for two millennia and exists in much smaller numbers. Instead, the dispersed Jewish people have spread individually and in relatively small communities throughout Christian and Muslim lands. There is need to ask how has this vast discrepancy affected human history. Has it affected progress and development, and in what ways has it affected the people who today represent Judaism in the world?

At a time when communication technology was limited, the fact is that this dispersion created a situation in which interaction between the inherent characters of each entity was facilitated. Interaction would not have occurred to anything like such an extent if all three monotheisms existed only side by side.

For most of its history, Islam was side by side. It interacted with Christian areas more creatively only for a few hundred years of its history. It was interaction created by the Jewish diaspora – influencing and being influenced – that was crucial in stimulating the creativity that resulted in the technological progress that was made in the West, and which enriched art, philosophy and other cultural pursuits. The religious debates sharpened minds while other influences contributed to a climate conducive to creative activity. Individual Jews, Christians and Muslims were involved, but it was the interaction that underlaid their achievements.  If the dispersion had not happened, it would have had to be created for this purpose. Perhaps, in some mysterious way, it was.

However, what was good for the world was not good for the Jews. While the Jewish people were engaged in this vital role, they were left vulnerable because of their small numbers and their landlessness. This made them perfect for scapegoating and attack. Another word for anti-Semitism could be simply bullying. This cannot now continue. The world in which the Jewish people survived against the odds has changed. Without a land, it would be in serious danger of disappearing. Even with a land, the remnant of Jewry in Europe is now fast fleeing many European countries.  The number of Jews in the UK is small.

They have virtually no presence any longer in Muslim lands.

Without a land, assimilation and secularism presents problems that that are met differently in a homeland.

Justice surely demands at least a tiny land to be an essential feature of Jewish survival but it needs to be seen not just for the survival of a few million people, but for the very survival of Judaism.

To continue to countenance this discrepancy is morally unacceptable. Providentially there was enough undeveloped space in what is now Israel to provide a tiny but viable homeland. The debate over the value or otherwise of faith and religious survival is still not over, but the destruction of that part of civilisation embodied in the Jewish people should not be a matter of debate.

But Israel is not seen in that light. It has been reduced to a political problem in the Middle East.  The world that has benefited so much from Judaism should be taking powerful steps towards ensuring the survival of one of its three great monotheisms. Instead, tiny Israel is surrounded by enemies dedicated to its destruction, enemies who have not made use of technologies for a better economy and remain envious of what Israel has achieved and are therefore aggressive towards it, enemies which are not challenged by the world but are to a great extent supported by it for its own economic and political enrichment.  It needs to realised that such policy is already starting to backfire.  Enemies of Israel are now attacking Christians in horrifying numbers in both ‘Christian’ and ‘Muslim’ lands. (There is complaint when Israel wishes to call itself a ‘Jewish’ land.) Christian churches are being infiltrated and taken over or destroyed in Christian lands where there are large non-Christian communities.

There is a case for a continuation of a situation in which there is interaction between people of different backgrounds in a country but also for the essential character and identity of countries to be maintained. This still happens in the UK, and was happening in Europe before the world wars

Now Europe, except for the UK, is virtually devoid of a vital Jewish presence.

Jews remaining are increasingly fleeing, and identities are being attacked in other ways. This identity issue is a major problem for the modern world. It is essential that it is not allowed to destroy Israel

All this has provided Israel with problems impossible to negotiate to everybody’s satisfaction, impossible always to know how best to deal with all that is thrown at it.

It is time for it to be seen in a proper context, one in which it can survive and continue to benefit the world with its unique qualities alongside of all that is good in the world. Only when seen properly in context can the difficulties be understood and resolved more easily.