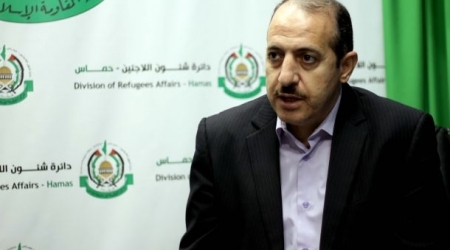 [The US now donates one third of the UNRWA budget of $1.2 billlion. http://israelbehindthenews.com/wp-content/uploads/2016/05/2015-ranking-of-countries-making-contributions-to-UNWRA.pdf . Hence, the importance of the fears of the leaders of the UNRWA community – David Bedein ]

1. In February 2017 elections were held for Hamas’ new political bureau in the Gaza Strip, its highest leadership body in Gaza. Of the 15 members elected, two were senior UNRWA employees: Dr. Suhail al-Hindi, chairman of the UNRWA staff union in Gaza and principal of an UNRWA school; and an engineer named Muhammad al-Jamassi, head of UNRWA’s engineering department for the refugee camps in the central Gaza Strip. A number of days after their election was exposed in the Palestinian and Israeli media, UNRWA announced Dr. Suhail al-Hindi’s suspension.

2. The election of two senior UNRWA employees to the new Hamas leadership led Israel to engage in extensive political and media activity with the United States and other countries that fund the agency. The Israeli media reported that on March 8, while Israeli Defense Minister Avigdor Lieberman visited the United States, he met with Rex Tillerson, the American secretary of state. Lieberman asked that the United States reevaluate its polices regarding the UN’s Human Rights Council and UNRWA.

According to the Israeli media, Lieberman said in a statement that both agencies did not fulfill their assigned roles (Haaretz, March 9, 2017). According to a report in the American media, Lieberman asked Tillerson “to review the management and criteria of UNRWA” (JTA.org, Washington, March 6, 2017).