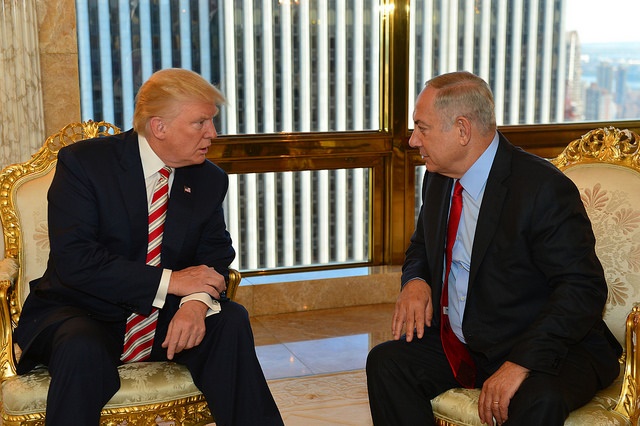 We are currently in the throes of a frenetic frenzy in advance of the visit of Donald Trump to Israel…writes Michael Kuttner.

Those unfortunate enough to be living anywhere near the King David Hotel in Jerusalem are preparing for a total lockdown as security paranoia takes hold. Everyone residing within a few blocks of the hotel has already been advised that no cars will be allowed to be parked on the street. Those which are parked will be towed away to another part of Jerusalem. Residents not only adjacent to the King David but also in neighbouring suburbs will be virtual prisoners as streets are blocked off and travel becomes impossible. Even those of us living twenty minutes or more by car from Jerusalem will be affected especially when the President goes to Bethlehem and most roads in southern parts of the Capital are closed.

If there was a certainty that all this mayhem was worth it because at the end of the day peace would break out then we could at least tolerate this disruption to our daily lives for three whole days. However notwithstanding high expectations one can already see that this visit will not usher in the messianic age.

Given the past dismal track record of the US State Department when it comes to Jews and Israel it comes as no shattering surprise to see that embedded unnamed officials are doing their best to make sure that endemic biases remain alive and well. President Trump promised to drain the Washington swamps. So far this has not happened and the same advisers who promoted unbalanced and one-sided policies in the past seem to be still eagerly beavering away and serving up the same failed goods. Trump was seen as a breath of fresh air when it comes to the fight against terror and its sponsors and this has been proven in the cases of Syria and Afghanistan. However, when it comes to Israel and the terrorist groups dedicated to its demise there is apparently a different tune being composed.

How does one explain the royal reception given to Abbas at the White House? Here is a daily promoter of delegitimisation, hate and terrorists who instead of being firmly admonished and warned about his behaviour is rather given a VIP reception and heralded as a facilitator of a peace which would in effect reward rather than sanction him. Despite heaps of evidence that Abbas and his colleagues are in cahoots with terror groups and use international aid to pay stipends to murderers and their families the President is going to laud him during his visit to Bethlehem.

Reports of conflict between officials who are advising a new more realistic and robust policy and those who are peddling the usual biased scare mongering scenarios prove that far from having been drained the State Department swamp is murkier and fouler smelling than ever.

The questions of the status of Israel’s Capital and the Kotel (Western Wall) are indicative of the struggle now being waged between the realists fed up with past failed policies and those dedicated to perpetrating historical injustices.

On the US President’s itinerary is a visit to the Kotel. At a meeting of those tasked with preparing for this event two American diplomatic representatives asserted:

“….the Western Wall is not your territory. It’s part of the West Bank,”

When the Israeli delegation protested the Americans retorted again:

“What are you talking about? It’s none of your business. It’s not even part of your responsibility. It’s not your territory. It’s part of the West Bank.”

Needless to say this precipitated a storm of condemnations which in turn resulted in a denial from the White House that these views represented Trump policy. Subsequently it transpired that those having made these assertions were diplomats stationed at the East Jerusalem American Consulate which of course represents American interests in the Palestinian Authority areas. Known for their slavish adherence to the usual State Department script it is obvious that there exists a serious dysfunctional situation between those touting the usual worn-out failed slogans and Trump staffers trying to inject some reality.

This does not always work out because it seems that the right hand does not know what the left hand is thinking or intends to do. Nikki Haley the US Ambassador to the UN has stated that of course the Kotel is in Israel and Jerusalem is the Capital. Sean Spicer on the other hand stated that the Kotel is in Jerusalem but refused to confirm that the city was Israel’s Capital. Trump’s national security adviser likewise was unsure as to the city’s status. Meanwhile the new US Ambassador headed straight to the Kotel from the airport and had no trouble identifying the site as part of Israel’s Capital. With this amount of confusion abounding we can only stand back and anticipate in amazement as to what sort of balagan (shambles) is going to play out in the coming days.

Here are some inconvenient truths which should be taken on board by the Trump team as they visit the region. They certainly will not hear any of this from either the media or the drooling politicians who will be outdoing each other in flattering rhetoric.

President Trump is meeting in Saudi Arabia with representatives of the Islamic world. He apparently will be telling them that they need to start dealing with Islamic extremism. However does anyone recognise the immense irony of the leader of the free world meeting in a country which suppresses the rights of women, promotes a most extreme form of Islam and forbids any religion other than Islam from openly being practiced in the kingdom? How many of those gathered there actually represent democracies and champion human rights for all? One of those invited is the President of Sudan who is a wanted war criminal as designated by the International Criminal Court. These paragons of hypocrisy are going to be telling President Trump that the only way to fight terror is by forcing the region’s only true democracy to commit national suicide.

In advance of this visit the Palestinian Arab “peace” negotiator has declared that Israel must apologise for its creation and the Nakba (catastrophe) which resulted. Of course no mention will be made of the fact that any catastrophe visited upon the local Arabs was as a result of their own rejection of the 1947 partition plan and subsequent attempts to wipe out the Jewish State or indeed recognise its right to exist. For good measure an apology for the Balfour Declaration is still being demanded.

On the eve of Trump’s visit the Arab residents of Hebron elected a convicted murderer of six Jews as their Mayor.

Will President Trump and his advisers be able to discern the real problem facing us, namely the rejection of a valid Jewish presence, or will they be seduced by the same sort of disinformation and endemic bias which has characterised the international community’s attitudes for the last seventy years or more?

Actually, will the Trump Presidency implode before any “peace” deals even get off the ground?

It promises to be a week of high drama.