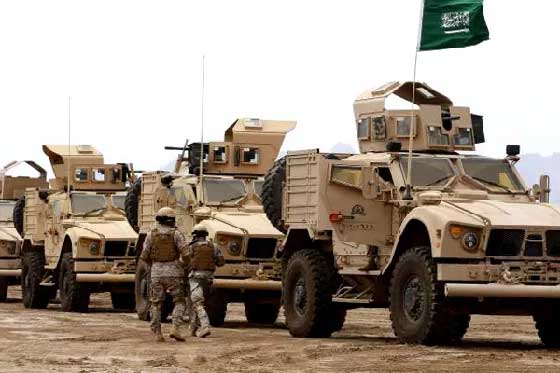 The Senate voted to support a sale of $510 million in precision-guided munitions to the Kingdom of Saudi Arabia on Tuesday, defeating a resolution to block the deal in a narrow 47-to-53 vote.

The bipartisan resolution was introduced by Kentucky Sen. Rand Paul and Connecticut Sen. Chris Murphy, both of whom also backed a similar resolution last year to prevent a tank sale to the Saudis under the Obama administration, which was easily killed, 71-27.

Sen. Paul voiced concern over the deal on CNN on Tuesday.

“I think one of the most important emails, and information we got from the leaked emails from Hillary Clinton, was an email she sent to John Podesta,” Paul said. “In it, she said ‘we need to put pressure on the Saudis and the Qataris because they’re giving financial and logistical help to ISIS.’ So we’re going to sell $350 billion worth of weapons to a country that the insiders were saying were actually giving weapons to ISIS? That’s a real problem for me.”

The senator was referring to the total sum of deals made with Saudi Arabia last month, not all of which are for weapons.

In addition to the precision-guided munitions, the Saudis are slated to receive 48 Boeing CH-47F Chinook cargo helicopters, worth $3.5 billion, as well as seven THAAD missile defense batteries, priced at $13.5 billion (a complete list of potential sales can be found here).

In the leaked Clinton-Podesta email invoked by Sen. Paul, the then-Democratic nominee asserts in no uncertain terms the ties between Gulf sheikdoms and the Islamic State militant organization, as if it were common knowledge. While among some quarters that may be the case, many Americans would be shocked to hear such a candid admission about one of America’s closest allies—especially since it is continually armed to the teeth with American weapons.

“While this military/para-military operation is moving forward, we need to use our diplomatic and more traditional intelligence assets to bring pressure on the governments of Qatar and Saudi Arabia, which are providing clandestine financial and logistic support to ISIL and other radical Sunni groups in the region,” Clinton wrote in the email, using an alternative acronym for the Islamic State.

Aside from sordid ties with terrorist factions behind the scenes, the Saudis are overtly engaged in a bombing campaign over the Gulf state of Yemen, the poorest in the Arab world. Thousands of non-combatants have been killed in the Saudi-led coalition’s air war, and the country’s civilian infrastructure has been devastated, creating a humanitarian disaster. The newly-purchased munitions, no doubt, will soon inflict more carnage on the besieged nation.

Over half of Yemen’s population has long been food insecure due to wartime conditions, according to the United Nations, and Yemenis are ill-equipped to handle basic medical ailments, let alone a recent cholera outbreak.

All along, American diplomats have ran interference for Saudi starvation tactics, while American-made bombs are dropped from American-made planes maintained and fueled by American mechanics on targets chosen with the help of American intelligence. From Obama to Trump, the United States owns the atrocities unfolding in Yemen; without U.S. support, there would be no war.

In his CNN appearance, Sen. Paul went on to explain the dynamics between Iran and Saudi Arabia, with the former developing ballistic missiles in order to thwart the arsenal America provides the Kingdom.

“Guess what? Iran develops [missiles] in response to Saudi Arabia getting more weapons. It’s an arms race over there, and we’re fueling it.”

Officials in the Trump administration have insisted Iran is the largest state-sponsor of terrorism, but in light of what is known about the Saudis’ support for ISIS, as well as likely ties to several Sept. 11 hijackers, that honor is better applied to Saudi Arabia, the birthplace of Wahhabism, or the ultra-orthodox strain of Islam practiced by the royal family and spread worldwide via Saudi-sponsored madrasas.

Sens. Paul and Murphy argue that the United States should not provide the Saudis munitions because of their reckless actions in Yemen.

The Leahy amendment is supposed to prohibit the Pentagon or State Department from providing weapons or other military assistance to foreign military units engaged in human rights violations, but it has not even phased American weapons deals to the Saudis.

In 2015, the year the Saudi-led coalition began its assault on Yemen, the United Nations allowed the Saudis to essentially investigate themselves after allegations of human rights violations arose. Rights organizations from Human Rights Watch to Amnesty International have condemned the Saudi-led coalition’s actions in the country year after year, but the complaints have had no effect on the U.S.-Saudi relationship.

In May, a bipartisan group of lawmakers, including Sen. Paul, urged the Trump administration to reconsider its policies regarding Yemen. Along with the other pleas from NGOs, rights groups, and senators to stop the murderous bombing campaign over the country—as well as the arms deals that allow it to happen in the first place—the initiative fell on deaf ears.