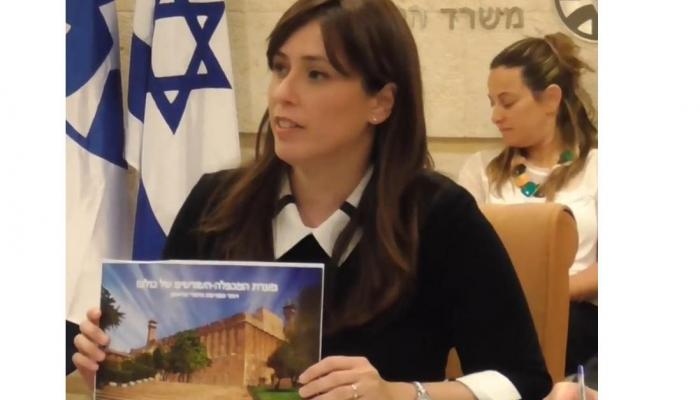 Israel’s Deputy Minister in the Ministry of Foreign Affairs Tzipi Hotovely spoke with foreign ambassadors in Jerusalem this week about the upcoming UNESCO vote on World Heritage Sites in Danger. She explained that the Tomb of Machpela (Cave of the Matriarchs & Patriarchs) in Hebron is not in danger, rather has freedom of worship for Jews and Muslims alike. She accused the Palestinian Authority of politicizing UNESCO with fake history and denying Israel’s rights to the burial site of the Jewish founding fathers and mothers.

During a meeting at the Minister of Foreign Affairs offices in Jerusalem, she displayed maps and photographs of Hebron to explain why PA claims of abuses are a farce.

The deputy minister commented on Muslim prayer services during the holy month of Ramadan, which ended on Sunday. The Tomb of Machpela complex was reserved for Muslims only on every Friday of the month. PA and Israeli officials worked together to provide smooth access for worshipers. She noted, unlike in other places in Israel and around the world, there were no violent incidents throughout the entire month.”We did not get any complaints from Palestinians. There is a big gap between what is really happening and the delegation that is trying to politicize UNESCO.”
She also said that photographs the PA delegation is using to push through the emergency recognition of the site as a Palestinian heritage site have nothing to do with the actual Tomb of Machpela.
“I saw the pictures that the Palestinians are basing their claims on. They are taking photos of other sites in Hebron and claiming that it is the Cave of the Patriarchs. You’re intelligent enough to realize that they are using you as tools in order to promote their propaganda.”
A sharing agreement between Israel and the PA regarding the holy site stipulates that ten days out of the year will be reserved for exclusive Muslim worship and ten days of of the year will be for Jewish worship. last year, during Ramadan, a large, elaborate mezuzah was ripped off. It was replaced and no damage occurred this year. However vandalism of Jewish items is common during Muslim-only prayer times.
Hotively also displayed a map of Hebron showing the division of the city since 1997. The PA enjoys 80% of the city including four Jewish holy sites which are off limits to Jews, despite the Hebron Accords. H1 Hebron, the PA side, includes several shopping centers, a sports arena, four hospitals, three universities and hundreds of factories and warehouses that do regular business with Israel.
H2, the Israeli controlled side of the city contains the Tomb of Machpela and Jewish historical neighborhoods including what was called the “Jewish ghetto” during Ottoman times. Starting with the Mamelukes in the year 1267, Jews were forbidden from entering the Cave of the Matriarchs and Patriarchs.
Hotovely noted the irony stating, “only under Israeli sovereignty have these places been open to all religions and all faiths.”She added, “when they’re trying to disconnect 4,000 years of history and basically erase it by using UNESCO in order to get international approval, it makes UNESCO a farce. We don’t want this important organization to be used as a political tool. They are not providing maps, they are not speaking about ;specific problems. I would be more than happy to show you the reality on a tour.”