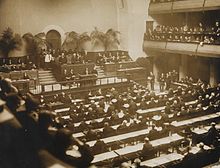 • Attempts to label Jewish presence in ancient Judea and Samaria (the West Bank) as illegal and “colonial” in nature ignores the complexity of this issue, the history of the land, and the unique legal circumstances of this case.

• Jewish communities in this territory have existed from time immemorial and express the deep connection of the Jewish people to the land which is the cradle of their civilization, as affirmed by the League of Nations Mandate for Palestine, and from which they, or their ancestors, were ousted.

• The prohibition under the Fourth Geneva Convention against the forcible transfer of civilians to territory of an occupied state was not intended to relate to the circumstances of voluntary Jewish settlement in their ancestral homelands in the West Bank on legitimately acquired land which did not belong to a previous lawful sovereign and which was designated to be part of the Jewish State under the League of Nations Mandate.

• Existing bilateral Israeli-Palestinian agreements specifically affirm that settlements are subject to agreed and exclusive Israeli jurisdiction pending the outcome of peace negotiations, and do not prohibit settlement activity.