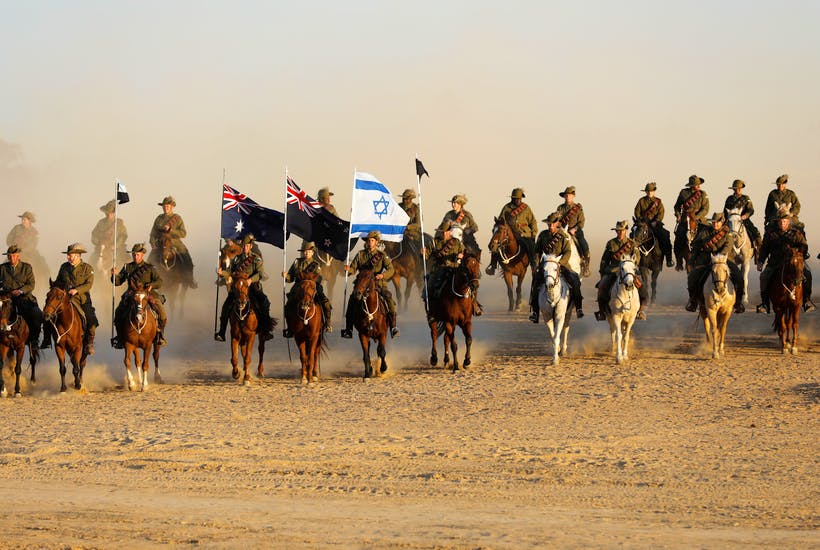 It is hard to describe the feelings of being in Israel for this very special moment.

Particularly, that of being an Australian in Israel and more specifically, spending Tuesday in Beersheba.

Overlay that with being a Jewish Australian and words fail to capture the incredible symbiotic and deep connections that embody a relationship that actually goes back 102 years to Gallipoli as Prime Minister Netanyahu pointed out.

Tuesday, however, belonged to a particular milestone event where we remembered and celebrated the centenary of the last charge of mounted soldiers.

Between 600 and 800 Australian soldiers – with hindsight, in one way all madmen – engaged in the seemingly impossible task of liberating Beersheba from the Ottomans and ultimately laying the groundwork for the future establishment of the State of Israel.

As crazy as it was, the charge succeeded.

And as many speakers pointed out, this was never supposed to be a charge. These brave Australians were not cavalry. They were infantry. The horses were supposed to carry them to the battle lines, where the intention was to dismount and fight as infantry.

The Turks were experienced fighters, not lacking in bravery themselves and had in fact defeated the Australians previously at Gallipoli.

And yet in Beersheba, two years later, the Australian Light Horse, with minimal weapons, weary after their many hours of riding through the desert, never having charged before, facing a force far larger in size who were well dug into their trenches and with heavy weaponry in place – took the risky decision to charge.

And so they did.

And they were brave.

And they were magnificent.

And they were victorious.

The commemoration events actually began the night before with an Australia Israel Chamber of Commerce reception at the King David Hotel in Jerusalem.

It is simply impossible to name everyone involved in all of the events and to acknowledge everyone – but one needs to start at least with an appreciation of just what work the Chamber does and how important it is.

Minister Josh Frydenberg laid the tone for the entire couple of days when he began by telling a story of Menachem Begin’s visit to the USA in the 1970s as opposition leader.

Begin, a fierce opponent of the then Israeli government when engaged in Israeli politics took an entirely different tone when outside of Israel.

That is, when travelling overseas, the internal differences were far less important than the overall relationship between Israel and in that case, the USA.

And so it was here with the Australians taking a similar position. There were no Liberal or Labor delegations. There was just one very large and high-level Australian delegation led by Prime Minister Turnbull and Lucy Turnbull and including leader of the opposition Bill Shorten and Chloe Shorten.

In fact, it was quite a testament to the relationship just how many Australian political leaders came to Jerusalem from both federal and state levels.

The reception itself was like a reunion. It was impossible to move more than two feet around the room at any one time, without bumping into old friends, supporters of Israel from over the years and people who truly came together to celebrate the Australia Israel relationship.

The day in Beersheba began early with the Battle of Beersheba and Sinai-Palestine Campaign Centenary Service at the Commonwealth War Graves Cemetery.

This was a joint Australian and New Zealand Commemorative Service.

Speakers included The New Zealand Governor-General Dame Patsy Reddy who said: “The military campaign changed political conditions in this region in the most profound way. The bonds between Australians and New Zealanders forged at Gallipoli were strengthened in the campaign. It is only fitting that we should join together today in remembering their service and their sacrifice. We will remember them.”

What was clear when it came to the Australia Israel relationship, and following on from Netanyahu’s trip to Australia early this year, was that the words expressed by the PM’s were not merely speeches prepared by their advisors, but that there was warmth and depth and a genuine friendship at play here and that on this for the Australians, it was bipartisan.

The Light Horse charge also proved decisive for the Zionist dream of a future Jewish state. Two days later, after word of the victory reached London, Britain’s Foreign Minister, Lord Arthur Balfour, issued a declaration calling for “The establishment in Palestine of a national home for the Jewish people.”

Prime Minister Turnbull said “They spurred their horses through that fire, those mad Australians, through that fire, and took the town of Beersheba, and secured the victory that did not create the State of Israel but enabled its creation.

“Had the Ottoman rule in Palestine and Syria not been overthrown by the Australians and the New Zealanders, the Balfour declaration would have been empty words,” he added. “But this was a step for the creation of Israel.”

Although at one point Prime Minister Turnbull did make the audience hold its collective breath when he referred to “Bill the Bastard” … until he made clear that he was referring to a particularly special horse that took part in the campaign 100 years ago.

Then there was the parade down the central street of Beersheba by the Diggers on horseback – so great to see.

The re-enactment of the charge itself also turned out to be a celebration of music from that period and a description by Kelvin Crombie of the historical implications of the charge. As he described it, “leading to the creation of five Arab States and tiny Israel”.

Crombie also quoted from Martin Luther King who said: “Peace for Israel means security, and we must stand with all our might to protect its right to exist, its territorial integrity. I see Israel as one of the great outposts of democracy in the world, and a marvellous example of what can be done, how desert land can be transformed into an oasis of brotherhood and democracy. Peace for Israel means security and that security must be a reality. Israel’s right to exist as a state in security is incontestable.”

The sight of over 100 Australians in uniform on horseback was indeed something to behold. And when overlaid with the strong personal and familial ties some of the riders had with the original Light Horse, I am sure that no one who was there will ever forget that moment.

The day concluded with an Australian service and huge Aussie barbecue at the Park of the Australian soldier. And what a barbecue it was.

Beersheba had done its job and provided us with wonderful weather all day and the evening was no different – stories were exchanged, strangers became friends and the good atmosphere flowed.

Each conversation only exceeded the previous one in the joy of listening to and speaking with true friends of the State of Israel, express their oh so positive views.

Special mention must be made of the Pratt Foundation who had put so much into these centenary events and who played such a generous role in enabling all of us to appreciate them.

We will always remember the ANZACS of 100 years ago and we will also remember always, the privilege of being able to be present for this Centenary.

There was never a day of personal experience, to be a more proud Australian Jewish Zionist – for all of those intertwining elements and their deepest meanings – than October 31 2017.

Got something to add? Join the discussion and comment below.