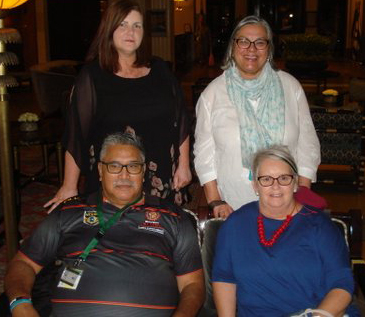 Among the thousands of visitors to Israel for the centenary commemorations of the Anzac liberation of Beersheba are Aborigine descendants of the original soldiers who took part in the battles.

Hosted by KKL Israel and JNF Australia these five family members have had an extensive tour of Israel seeing for themselves the places where their ancestors fought to liberate Palestine from Ottoman occupation. In addition they have been able to witness the remarkable revival that has occurred in previously barren sites thanks to the rehabilitation, tree planting and development projects undertaken by KKL-JNF.

Visits to the Commonwealth War Cemeteries on Mount Scopus, Jerusalem, and at Beersheba were emotional highlights. As first time visitors to Israel they have been “blown away” by the sights and sounds and vibrancy of the country and marveled at its smallness as compared to the vast continent of Australia.

I had the opportunity of catching up with them in Jerusalem and hearing about their observations and experiences.

I learnt that 100 years ago the indigenous people of Australia suffered discrimination and that this was a major contributing factor in the decision of young Aborigine men to join the army. They hoped that by doing so it would afford them an opportunity to see the world and escape from an environment which treated them so badly. As expert horse handlers their skills were much sought after and they rapidly became known as fearless and brave warriors. Apparently these heroes hoped and believed that their contributions to the war effort and their sacrifices would ensure acceptance back home. Unfortunately it seems that this was not to be and it was not until many years later that they were accepted as citizens of Australia with full civic rights.

Today’s descendants feel very deeply about the belated recognition afforded their soldier ancestors. In many ways this trip and participation in the memorial ceremonies is the closing of a circle. Finally they can pay tribute in person to the valour of their ancestors, witness how respected their bravery is honoured in Israel and see at first hand how the Anzacs’ liberation of Palestine resulted in the restoration of Jewish sovereignty. The affinity of the Aborigine people with the Jewish people has much to do with a common history of discrimination, oppression and courage under the most trying circumstances.

KKL Israel and JNF Australia are to be commended for enabling these visitors to join in this most memorable occasion and affording them the opportunity of paying tribute to the heroes from “down under.”

Here is a brief summary of the families:

Great niece of Charles Fitzroy Stafford of the 12th. Light Horse Regiment.  Peta said: “I believe that the service and sacrifice of Indigenous Australians in WW1 needs to be acknowledged & remembered.”

Great Granddaughter of David Mullett  – 1st. Remount Unit ,No.2 Squadron. Doris commented: “The story of our great grandfather, his accomplishments in education and his life after returning has remained in the memories of my father and aunty and shared in the family.”

Son in law of Colin Victor Leftwich, nephew of Harry Doyle – 11th. Light Horse Regiment. Adrian said: “I started doing a research project with the young people I was working with to honour the Black Diggers of WW1. I am committed to passing on the family history and stories to my children and grandchildren. I believe this is foundational for their sense of identity and strength of spirit.”

Great Niece of Allan McDonald –  8th. Light Horse Regiment. Judith said: “I believe that Uncle Allan’s skills, knowledge and bush experience assisted with his survival. Uncle Allan married late in life and had no children and no direct descendants, therefore his legacy needs to be preserved and his story needs to be told.”

Ernest is buried in Beersheba.

Terry told J-Wire: “I feel excited and honoured to be part of this project. It means I will be the only member of my family to visit Ernie’s grave. I will pay my respects and gratitude.”