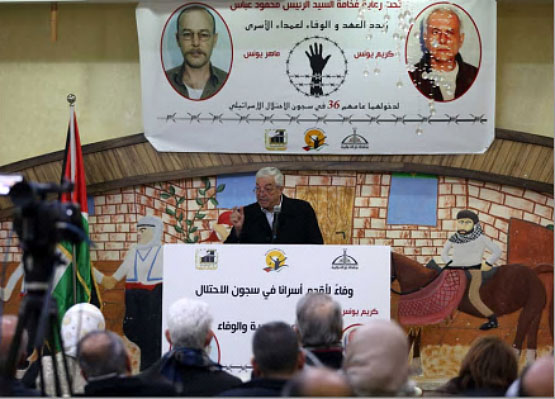 The PA and Fatah routinely support the Palestinian terrorists imprisoned in Israel, considering them national heroes and not terrorists or criminals. Their support is given to all the organizations, including those who murdered women and children. In practical terms, generous financial aid is given to the families of prisoners and shaheeds and to prisoners and released prisoners. That is behind Mahmoud Abbas’ strong refusal to accept the American demand, reiterated in his opening speech at the PLO’s Central Council conference. In addition, the PA gives them moral support by holding ceremonies to honor them and by naming institutions, streets and city squares for them.

Karim Yunes and Maher Yunes are cousins from the village of ‘Ara (central Israel) who hold Israeli citizenship. Following instructions from a relative named Sami Yunes from the village of ‘Arara, they murdered Sergeant Avraham Bromberg in November 1980, while giving him a ride from his army base in the Golan Heights to his home in Zichron Yaakov. The three were detained in January 1983. A military court sentenced them to death but later reduced the sentence to life imprisonment. In 2012 the sentences was further reduced to forty years. Sami Yunes was sentenced to life imprisonment and released in the Gilad Shalit prisoner exchange deal. In May 2017 Fatah’s Revolutionary Council appointed “veteran prisoner” Karim Yunes to Fatah’s Central Committee. Right: Senior Fatah figure Mahmoud al-‘Alul speaks in the name of Mahmoud Abbas, the sponsor of the ceremony honoring the Palestinian terrorists (Wafa, January 4, 2018). Left: The sign hung behind the speaker’s podium. The Arabic reads, “Under the sponsorship of his honor chairman Mahmoud Abbas [in red]. Renewing the commitment and loyalty to the veteran prisoners Karim Yunes and Maher Yunes as they enter their 36th year in the jail of the Israeli occupation” (Facebook page of Dr. Laila Ghannam, January 14, 2018). Pictures from the ceremony in Ramallah Right: Ibrahim Ramadan, governor of the Jenin district, next to the mother of terrorist Karim Yunes at the inauguration of the “Karim Yunes square” in Jenin . They hold a sign of Karim Yunes flanked on the left by Yasser Arafat and the right by Mahmoud Abbas. The Arabic reads, “Fatah/Jenin. Detained since January 6, 1983. The square [named for] the oldest prisoner. Prisoners and hero, Karim Yunes” (bukra.net, May 18, 2017). Left: Issam Abu Bakr, governor of the Tulkarm district, inaugurates the “Maher Yunes square” in Tulkarm (bukra.net, May 12, 2017).

[1] From a study by Brigadier General (Ret.) Yossi Kuperwasser, “Incentivizing Terrorism: Palestinian Authority Allocations to Terrorists and Their Families,” published by the Jerusalem Center for Public Affairs, 2017. ↑
[2] For further information, see the June 26, 2017 bulletin, “During diplomatic contacts with the Americans, the Palestinian Authority rejected demands to stop financial support for terrorist prisoners and the families of shaheeds.” ↑