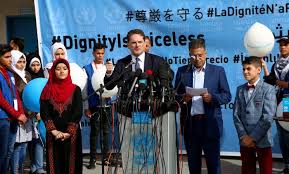 UNRWA is going on a new fundraising drive to allow future generations of Palestinian Arabs to remain stateless, disenfranchised, dependent on outside charity, and victims of discrimination in the entire Arab world because of their artificial designation as “refugees,” a designation that they cannot escape according to UNRWA rules.

The name of this initiative? “Dignity Is Priceless.”