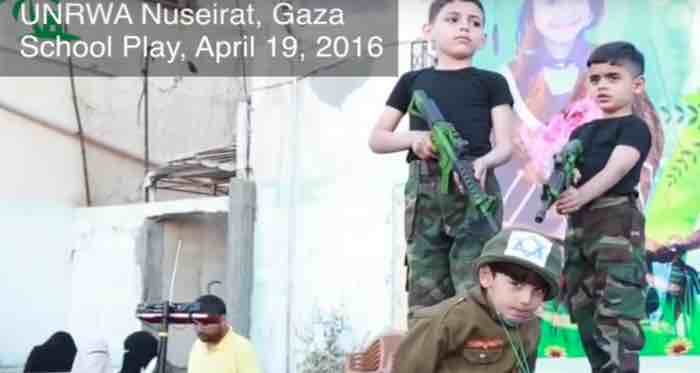 The United Nations Relief and Works Agency for Palestine Refugees in the Near East (UNRWA) has hired a public relations firm, MarathonStrategies.com, to bolster its image after the Trump administration cut back sharply the amount of contributions the United States will be making to the agency. The Trump administration reduced the expected 2018 U.S. contribution of more than $360 million to about $60 million. As part of its Dignity Is Priceless global fundraising campaign to help make up for the shortfall, Scott Anderson, UNRWA’s Director of West Bank Operations, and Peter Mulrean, Director of UNRWA’s Representative Office in New York, spoke to reporters at UN headquarters last week.

The UNRWA directors pitched the importance of UNRWA’s humanitarian work. They said that the current financial crisis is in on a scale unlike any that UNRWA has experienced in the past, calling the cutback an “existential” threat to UNRWA’s ability to continue serving the needs of the Palestinian people. They complained that the United States government has not explained the rationale to UNRWA for its action. All that UNRWA’s leadership should do is to look in the mirror.

The truth is that continuing to provide hundreds of millions of dollars to UNRWA is throwing good money after bad.  Mr. Anderson, UNRWA’s Director of West Bank Operations, unwittingly pointed to the fatal flaw in the educational program UNRWA offers to its students, consuming about half of UNRWA’s regular budget, which he described as the most important service that UNRWA provides. UNRWA, he said, must teach the “host” country’s curriculum, which UNRWA considers to be the curriculum that the Palestinian Authority creates. Mr. Anderson said that it treats the Palestinian Authority for this purpose as representing a “sovereign” nation. Based on this fiction, UNRWA contends it has no choice but to use a curriculum designed by the Palestinian authorities that has been found to indoctrinate Palestinian children to hate Jews and to believe that Israel has no right to exist. A study released last year by the Center for Near East Policy Research, the Simon Wiesenthal Center and the Middle East Forum found that textbooks used in UNRWA schools during 2016 and 2017 have continued instilling anti-Israel, anti-Jewish hatred.

Rather than hire an expensive public relations firm to polish its image, UNRWA should fundamentally reform its ways

UNRWA appeared to cave to the Palestinian Authority’s demands. UNRWA Commissioner-General Pierre Krähenbühl promised that “UNRWA is completely committed to the Palestinian curricula, and that no change will be made in these curricula.” Even then, the Palestinian Authority Ministry of Education would allow no wiggle room. According to an article published on November 8, 2017 by the official PA daily, Al-Hayat Al-Jadida, “The [PA] Ministry of Education and Higher Education reiterated its complete opposition to any step or attempt that UNRWA (UN Relief and Works Agency for Palestine Refugees in the Near East) or any international body are liable to make against the Palestinian curricula – whether by omitting, changing, or adding any materials in contradiction of the philosophy of the [PA] curricula and in contradiction of the contents of the schoolbooks in everything connected to the national identity and cultural, social, and national heritage of our people.” The article quoted from the ministry’s November 7, 2017 notice that “all of the materials that UNRWA is interested in adding must be complementary and consistent with all of the contents of the schoolbooks.” In other words, UNRWA cannot stray from the Palestinian Authority’s hate-filled curriculum.

Mr. Anderson said that UNRWA was just beginning to roll out its “enrichment” materials, but was deliberately vague as to what that really meant, given the Palestinian Authority’s use of hate-filled indoctrination as part of its curriculum. He gave no timetable for the rollout, or any indication whether the teachers in UNRWA’s schools would have to use the additional materials in their classrooms. The only example he offered of an UNRWA lesson in tolerance had to do with gender equality.

Until the Palestinians stop using UNRWA schools to poison the minds of Palestinian children with hate, the Trump administration should continue its cutback of funding for the UN agency. Rather than hire an expensive public relations firm to polish its image, UNRWA should fundamentally reform its ways.