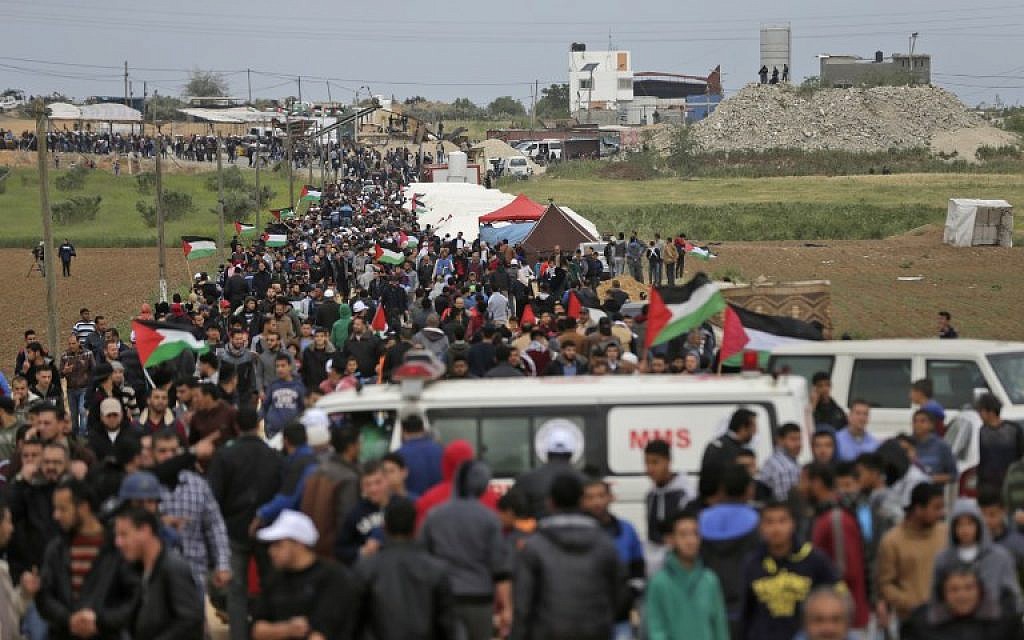 Quote of the day: “A riot is a spontaneous outburst. A war is subject to advance planning”…writes Michael Kuttner.

This succinctly sums up the mayhem surrounding the staged, organised and choreographed drama on the Gaza/Israel border. In scenes reminiscent of a lousy TV soap opera, the build up and advance publicity associated with this production guaranteed maximum worldwide exposure. The props were prepared well in advance, the participants had plenty of time to rehearse their moves and the script was tailored precisely for the intended viewing public.

In other words, although portrayed as a spontaneous outburst of righteous indignation and a cry for help the real agenda is something else altogether. The Hamas leadership makes no secret of its intentions. They know that the international media and the usual useful idiots will ignore both the genocidal aims of Hamas and the supporting cheer leaders from Ramallah. In fact the more extreme their rhetoric becomes the greater chance of increased funding from nations whose hypocritical contortions have reached unbelievable heights.

Portrayed in the general media as a desperate plea for help from the suffering masses the actual reality is far removed from this alleged portrayal. If the “rent a crowd” journalists bothered to investigate and research the utterances of Hamas and Fatah leaders they would rapidly discover the true agenda. Setting up tent cities adjacent to the border, facilitating women and children to live there without running water or hygienic facilities while organising daily riots involving violence are all designed with one aim in mind. Pictures and videos of them storming the border fence in front of Hamas terrorists makes fantastic visual viewing. If the media can capture the IDF firing to prevent breaches to the fence and there are resultant casualties then it is an added bonus.

This video just released by the World Jewish Congress clearly sums up the real situation and agenda. You will not see it anywhere in the local media.

The “made for TV” Hamas production succeeds every time because the media laps it up and the subsequent political fallout is always guaranteed to release an avalanche of condemnation from all the expected sources. Deliberately ignored are the articulated intentions of the instigators of this farce which is scheduled to run repeatedly until May when the annual “nakba” frenzy will rev up and the US opens its Jerusalem Embassy.

Lost in all this fog of misinformation is the elementary question of who is funding the ongoing riots or more accurately the continuing war against the Jewish State. The short answer is that the taxpayers of Australia and New Zealand are helping to fuel this war of hate because their tax money is continuing to be sent to groups fully involved in furthering campaigns against Israel.

Just one classic example should suffice to expose the extent of the can of worms which donor nations steadfastly continue to ignore.

As reported by an impeccable source, a Hamas affiliated newspaper, the head of UNRWA Gaza workers’ union stated: “the people who gathered here came to express their right to return.”
He added and that “rights are not received with supplication but must be obtained by force.” He praised the Palestinian Arabs who participate in “peaceful” demonstrations on Friday and in the so-called large-scale intended “march of the return.”

Not to be outdone the Director of UNRWA operations in Gaza proclaimed his support for anti Israel demonstrations at the border fence and pledged that his organization would provide medical care to all “refugees” injured during these misnamed “peaceful” expressions of rage.

Thus, once again UNRWA’s true intentions are revealed. The original refugees now number less than 20,000 but thanks to a self-perpetuating policy of deceit and deception those designated as refugees have multiplied by many millions. One would have thought that this policy of permanently maintaining an ever-increasing number of displaced persons which in turn demands an endless supply of donor funds is the perfect excuse for donor nations to declare DAYENU. Apart from the USA every other country merrily carries on throwing their money into the Hamas controlled camps. Where do you think the money to pay for riots, demonstrations, marches, tunnels and terror come from? Any misery suffered by the residents of Gaza is inflicted by their own leaders’ reckless and obsessive desire to eliminate Israel.
The PA receives billions from the international community annually.

Here is what it helps to fund (as revealed by PMW):

It is therefore astounding that in the face of this blatant reality the Australian Government continues to send foreign aid to groups intent on undermining the Jewish State. Even worse is this recent news report which shows that New Zealand taxpayers are now going to contribute even more. “Several weeks ago, UNRWA received pledges of $100 million in additional funding from Qatar, Canada, Switzerland, Turkey, New Zealand, Norway, Korea, Mexico, Slovakia, India and France as a means of making up for the aid that was cut by Washington.”

Abbas has now openly admitted the “pay to slay” policy of the PA and pledged it will continue. Where do you think these funds originate from? The PA Secretary General announced on International Women’s Day: “having female terrorist leaders is proof of gender equality in Fatah. There is no difference between men and women.”

The silence from the UN was total. Actually they were not entirely silent because in quick succession another slew of anti Israel condemnations have been forthcoming and there are more in the pipeline.

On the eve of Yom Hashoah it behooves us to remember the world’s silence and hypocrisy in the lead up to the war. Despite today’s pious declarations most of the international community has reverted to the standard ritual of blaming Jews for defending themselves and continue to fund those intent on finishing what the Germans and their willing helpers failed to finish.

In the succinct words of John Bolton, the new designated USA National Security Adviser: “The United Nations is a never-ending scandal disguised as an everlasting hope.”