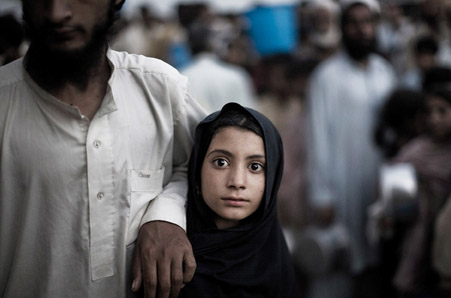 Images from Douma, Syria of dozens of dead children with foam around their mouths recently emerged as their families were gassed to death by the Bashar Assad regime and its allies. In the wake of this grotesque crime against humanity, now is the time to raise awareness about child abuse in the Muslim world.

As we speak, Syrian men, women and children are being raped and massacred by the Assad regime on a massive scale. While children are not the only victims of the Syrian civil war, they are clearly the most vulnerable.

Despite the horrendous atrocities committed by the Assad regime, the international community has been slow to act. While the U.S., U.K. and France did recently bomb targets associated with Assad’s chemical weapons program and Israel has gone after Iranian targets in Syria, the international community continues to refrain from seeking to topple the Assad regime despite its massive human rights abuses.

Meanwhile, the plight of young Christian girls in Nigeria is equally horrendous and yet has received a fraction of the publicity.  Boko Haram, who has declared a caliphate in the region, routinely attacks Christian communities and engages in abductions, forced conversions, rapes, pillaging and murder. According to UNICEF, over 1,000 children have been kidnapped by Boko Haram over the last four years. However, except for a brief Twitter campaign by Michelle Obama, the world continues to ignore Boko Haram’s atrocities that victimize Christian Africans. Stories on the subject are relegated to the back pages of Western newspapers if they are published at all.

As with the children of Syria and Nigeria, the world is likewise turning a blind eye to the terrible plight of young Hindu girls in Bangladesh. According to Shipan Kumer Basu, the president of the World Hindu Struggle Committee, the rape of Hindu girls in Bangladesh is rampant. Apparently, according to the belief system of radical Islamists in that country, rape is thought to help to convert Hindus to Islam. Basu has claimed that the Bangladeshi government led by Sheikh Hasina is covertly in a coalition with ISIS to rid the country of Hindus. Most of the rapes against Hindu girls are not recorded in official statistics, he says, and this is a cover-up for the government’s gradual ethnic cleansing of non-Muslim minorities.

The plight of non-Muslim girls in Pakistan is also dire. According to the Movement for Solidarity and Peace, around 1,000 Hindu and Christian girls in Pakistan are kidnapped, forcefully converted and married to Muslim men against their will every year. It claims that the victims are usually between the ages of 12 and 25. The Movement for Solidarity and Peace says that the actual figures are most likely much higher; many such cases go unreported. Pakistan has a horrific record on both women’s rights and minority rights. Recently, there were massive protests in the country after an 8-year-old girl was raped and burned alive, and after a 7-year-old girl was raped and murdered. Despite the attention brought to the issue of Pakistani girls’ and women’s rights by Nobel Prize winner Malala Yousafzai, the international community has generally turned a blind eye to the fate of Hindu and Christian girls in the country.

Indeed, the West has a tendency to ignore the oppression of non-Western, and particularly Muslim, children. Yemen is the prime example of this. The plight of children in Yemen is even more dire than that of Syrian children. CNN has reported that every five minutes, a child in Yemen dies as a result of entirely preventable causes. Over 8 million people in the country do not know when their next meal will be and three-quarters of the population is in desperate need of humanitarian aid. Given the horrific situation that has developed as a result of the struggle between the Iranian-backed Houthi rebels and Saudi Arabia and its allies, the rate of child marriage has risen dramatically. Nearly two-thirds of Yemenis are married before they reach age 18.

Nujood Ali, the Yemeni child bride who made international headlines after seeking a divorce from an abusive husband who raped her at age 10, remains the poster child for the right of children to remain children.  However, after her book, “I Am Nujood, Age 10 and Divorced,” was published, it was reported that almost all of the funds raised to help her achieve her goal of becoming lawyer and working to improve women’s rights, were instead pocketed by her father – the very same man who sold her into an abusive child marriage in the first place.

Her father used the money to buy two more wives for himself rather than ensuring the future of his daughter. According to various media reports, while he lives in the home that was bought for his daughter by her publisher, Nujood was forced out of her own home and is living in squalor.  She never got to finish school. Her situation further deteriorated when the civil war broke out. Her life could have turned out so much better if the money sent to help her had been given to her via her lawyer rather than her abusive father and if she had been given the opportunity to study outside of Yemen.

Another young child bride, Marib al-Mishwahi, the daughter of Iraqi parents who immigrated to the U.S., faced a much better fate than Nujood Ali. Al-Mishwahi was to be forced into an unwanted marriage in another city in the U.S. in exchange for her family receiving $20,000. According to The Washington Post, when she refused the marriage proposal, her parents poured boiling water on her, beat her with a broomstick and choked her almost to the point of unconsciousness. To save her own life, she told her parents that she would agree to the marriage. She ended up in protective custody along with her five siblings after briefly disappearing and is now able to start her life over again in the U.S. Her parents were arrested.

This demonstrates that a child bride’s place of residence can make all the difference in breaking the cycle of abuse.

A child bride in Yemen never managed to break out of the abusive cycle despite massive international support because the charity organizations made the mistake of giving the money to her father rather than her lawyer and because she was not taken away from her abusive family. The children in Syria are being massacred because the world has turned a blind eye to their suffering. Young Christian girls in Nigeria continue to be abducted and raped; the world does not care about their plight. No country has intervened to save their lives; those who could take action on their behalf apparently do not sufficiently value their human rights. The rate at which Hindu children in Bangladesh and Pakistan are raped continues to rise and the West does not care: The victims are not white, are not Christian and are not of European origin.
The time has come for the West to start to care about the plight of children in the Muslim world and to take a stance against the child abuse that permeates Muslim societies instead of ignoring grave human rights abuses merely because the victims are not Western.

Rachel Avraham is a senior media research analyst at the Center for Near East Policy Research and a correspondent for the Israel Resource News Agency.