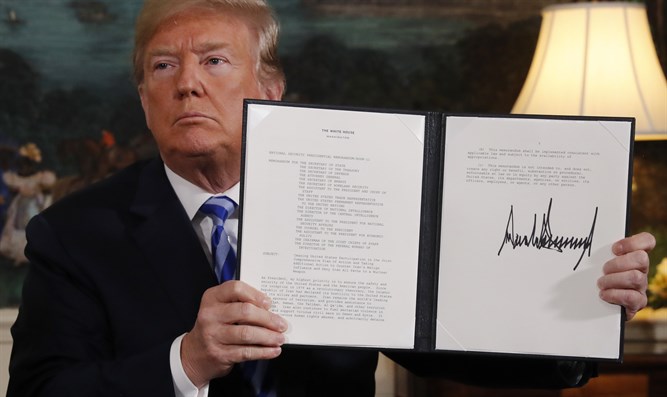 After President Donald Trump announced the United States would withdraw from the Joint Comprehensive Plan Of Action (JCPOA), as the nuclear deal with Iran is called, most of the world reacted negatively except for Israel and Sunni Arab countries.

As was expected, Great Britain and the EU issued statements expressing “regret” while the EU’s Foreign Policy chief Frederica Mogherini said that the European nations who closed the deal with Iran were “determined to preserve it.”

Mogherini, who was one of the architects of the JCPOA, claimed the agreement was “delivering on its goals which guarantees that Iran will never develop nuclear weapons.”

The EU’s top diplomat went on calling on the rest of the world “to do its part to guarantee that it is fully implemented for the sake of our own collective security.”

Mogherini repeated her claim that the inspections by the International Atomic Energy Agency (IAEA) have delivered the evidence that Iran “has fully complied with its commitments.”

She then expressed strong concerns about Preident Trump’s announcement that the U.S. would re-impose biting sanctions on Iran and said that the EU would act to defend its “economic interests.”

The Iranian regime, meanwhile, has issued mixed responses to Trump’s announcement, with President Hassan Rouhani indicating Tehran was willing to re-negotiate the deal with the other five world powers while he also threatened to resume uranium enrichment on a massive scale.

In a televised address to the Iranian people, Rouhani said he had “ordered Iran’s atomic organization that whenever it is needed, we will start enriching uranium more than before,” and claimed Iran could do this within a couple of weeks.

Iran later announced that Foreign Minister Javad Zariff would embark on a diplomatic offensive and intended to visit China, Russia and the European countries which negotiated the what Trump calls a “rotten deal” in order to save the JCPOA.

Israel’s position on Trump’s “brave decision” to quit the nuclear agreement with Iran is well known and was widely reported by the international media.

The Arab reaction to Trump’s decision to pull the U.S. out of the JCPOA remained underreported, however.

Sunni Arab countries, with the remarkable exception of Jordan, are extremely happy with Trump’s decision.

For example, Khalid Bin Salman the Saudi ambassador in the U.S. wrote on Twitter:

“The Kingdom of Saudi Arabia fully supports the measures taken by POTUS with regards to the JCPOA,”while the Saudi Foreign Ministry highlighted the fact that Iran used the nuclear agreement to destabilize the region and to develop ballistic missiles as well as an increase in aid to “terrorist groups.”

Anwar Gargash, foreign minister of the United Arab Emirates, issued a similar statement saying “Iran interpreted the JCPOA as concurrence of its regional hegemony. An aggressive Iran was emboldened as a result & its ballistic missile program became both offensive & exportable.”

Egypt on the other hand, stressed the importance of Arab involvement in efforts to amend the JCPOA “in a way that will ensure that Iran remains as a country free of atomic weapons.”

By contrast, Jordan’s foreign minister Ayman al-Safadi warned of “dangerous repercussions” and urged the U.S. to reconsider its decision because of the danger of a possible nuclear arms race in the Middle East if the JCPOA would be annulled without a contingency plan to prevent Iran from breaking out to a nuclear weapon.

Arab analysts even warned of the outbreak of a new regional war and pointed to last week’s confrontation between Israel and the Quds Force of the Iranian Revolutionary Guards Corps (IRGC) as an example of how an already tense situation could deteriorate into all-out war.

All these reactions failed to see “the elephant in the room” which “is standing quietly all but unobserved,” as Times columnist Melanie Phillips put it this weekend.

By ditching U.S. participation in the JCPOA Trump is effectively upping the pressure on the fanatical Islamist regime in Iran.

This is why the President ended his announcement last Tuesday by directly addressing the people of Iran.

“The future of Iran belongs to its people. There has been enough suffering, death and destruction- let it end now,” Trump said.

Israel educator Nevet Basker summed it up in one Tweet.

Under the JCPOA “Iran pursues nukes with international legitimization and funding,” Basker wrote.

Now comes Trump and introduces what she called “Plan B.”

Iran will now be “subject to U.S. sanctions, diplomatic pressure, and domestic unrest if it continues its nuclear pursuit. I’ll take B,” Nevet Basker tweeted.

Indeed, the Islamist regime in Iran could crumble when fresh sanctions are imposed by the U.S., according to the Iranian opposition-in-exile.

Officials of the Paris-based National Council of Resistance in Iran (NCRI) claim that the popular uprising which started last December in many parts of Iran is gathering steam.

In April alone there were 450 separate protests in 31 provinces across Iran according to NCRI.

On the first of May, International Workers Day, tens of thousands took to the streets in 19 cities with banners that read: “Think of us, not Syria,” according to the NCRI.

The protests, which this time involve the working classes, the regime’s former power base, started because of the JCPOA.

The Iranian people have not profited from the billions of dollars in sanctions relief received after the implementation of the nuclear deal.

On the contrary, poverty has increased tremendously in the Islamic Republic since the beginning of 2016, when the JCPOA was implemented and the country’s currency, the Riyal, is now in free fall.

“We believe this year is decisive. These protests are of deep concern to the regime, and we predict it will go within two years,” Hossein Abedini, a spokesman for the NCRI, told reporters in Paris.

As he spoke, former IAEA deputy head Olli Heinonen delivered the evidence for Mogherini’s claim that the nuclear agency inspections regime in Iran has resulted in full Iranian compliance with the JCPOA is a lie.

“Let’s be clear – no one from the IAEA has ever said it has been able to carry out the level of inspections required under the terms of this agreement,” Dr. Olli Heinonen told reporters on Saturday.

His admission was followed by the news that Tero Varjoranta, chief of inspections of the IAEA, had suddenly resigned. The UN watchdog gave no reason for Varjoranta’s sudden resignation.

Iran, meanwhile, threatens to publish the names of all Western officials who were bribed to pass the JCPOA.

Yochanan Visser is an independent journalist/analyst who worked for many years as Middle East correspondent for Western Journalism.com in Arizona and was a frequent publicist for the main Dutch paper De Volkskrant. He authored a book in the Dutch language about the cognitive war against Israel and now lives in Gush Etzion. He writes a twice weekly analysis of current issues for Arutz Sheva