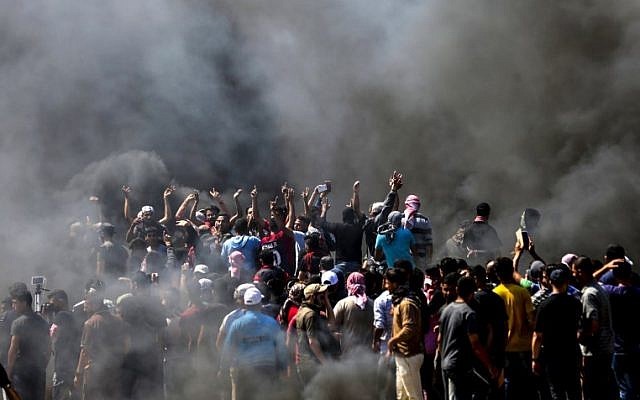 “My mind is made up–don’t confuse me with facts.”

I know that’s the way antisocial media works, but it you’re interested in facts about the Israel-Gaza situation, read on. If not, well, you can also stop posting on my sites.

Here’s one that I haven’t seen anywhere except in my posts: The border between Israel and Gaza is an official, internationally recognized border. Part was determined in 1922, the rest was drawn up in 1950, and Israel withdrew behind it in 2005 when it pulled out of Gaza.

Here’s another one: Israel ended its occupation of Gaza in 2005, evacuating 18 settlements and pulling its armed forces out. There are those who say that even so, Israel still occupies Gaza because it maintains a sea blockade and controls the border crossings between Israel and Gaza. That doesn’t stand up to objective scrutiny:

Israel has been dealing with Palestinian riots since 1987, when the first Palestinian uprising erupted. Israel has tried many methods to quell riots without killing people. Some are standard, like tear gas, water cannons, and rubber-coated bullets. Some are unprecedented, like dropping leaflets warning people to stay away from conflict areas, mass cell phone warning calls, and “knocking on the roof,” aiming low-lower mortar shells at buildings a few minutes before an actual attack–no other army in the world does these things, because they endanger its soldiers. Some are comical, like the gravel-spitting machine that was used for a while to try to break up riots.

What’s missing is an innovative method to break up huge riots like the ones in Gaza without killing dozens of people–because make no mistake: Hamas benefits from deaths of protesters, the more the better. It doesn’t matter if Israel says most of the dead were Hamas members. The numbers are the numbers, and they lead to the silly argument of proportionality, a concept that applies only to Israel. You can read about that here. The raw numbers lead to outsized diplomatic responses–recalling ambassadors, demanding UN inquiries, condemnations, calls for “restraint on both sides.” The fact that more people are killed every day in both Syria and Yemen is irrelevant to the people and politicians who see an opportunity to make some hay at the expense of Israel, whether it’s justified or not, whether they know that or not.

Yet that does not address the central issue–Israel plays into the hands of Hamas by killing Palestinians, even if Israel feels it can justify its actions. There’s an Israeli saying that translates, “Better to be smart than right.” That applies here. It is inconceivable that in the last 30 years, from the time Israel started dealing with Palestinian riots and suffering bad press and diplomatic sanctions from its handling of them, that no one has come up with a way to do this better. After all, Israel developed and deployed an anti-rocket system, “Iron Dome,” to deal with rocket fire from Gaza and elsewhere. So why has this challenge been too hard to beat? Well, this is an article about facts, so I won’t speculate about that. But I will offer the idea that if Israel used tanker planes that suck water up from the sea and drop it on forest fires–that would be a way to douse the flames of the burning tires and chase people away from the border with less damage and fewer casualties.

Next let’s look at the claim that all this is because of Israeli occupation, and if only Israel would agree to compromise a little bit, all this could be resolved peacefully. I’ve seen that argument several times. In fact, Israel has offered the Palestinians a state in the equivalent of all of the West Bank and Gaza, an unprecedented corridor between the two, and parts of Jerusalem TWICE, in 2000 and 2008, but the Palestinians turned them down. It doesn’t matter why Yasser Arafat and Mahmoud Abbas both responded to the offers by storming out of the room and slamming the door–those are the facts. Here’s why you might not have heard of the 2008 offer.

I spent many, many days in Gaza over the space of three decades, covering the conflict, the society, and the people. I haven’t been there since 2000, because I am an Israeli citizen, and we’re not allowed there, for obvious reasons. I can say as a fact that Gaza is and was a hellhole. There is genuine suffering, poverty, hopelessness.

There is a way to fix it. There are only 1.8 million people in Gaza, about the same as a medium-sized city anywhere else. Here’s the way: Instead of the politicized “aid” to “refugees” aimed at perpetuating the conflict–build one large factory. One car factory, for example. It could employ 10,000, maybe 20,000 people. The income from these factory jobs and the accompanying jobs they create would trickle down into every household in the territory. The factory would have to be heavily subsidized for a long time–but the price tag would be a fraction of what the UN is pouring into its perpetual “refugee” camps.

So in the space of one little article, here are two solutions: Tanker planes to break up Gaza’s riots, and a factory to rescue Gaza’s people. It’s really not that hard. All that’s needed is the will to do it.

Journalist MARK LAVIE has been reporting on Israel and the Mideast since 1972, covering the Israel-Palestinian conflict from the front lines, and living in Cairo during Arab Spring. His second book, “Why Are We Still Afraid?” is ready for publication.